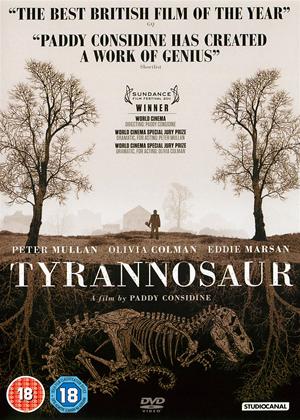 I first came across Paddy Considine through his acting in low budget films from director Shane Meadows, in particular his striking lead role in 'Dead Man's Shoes', and I've followed his career since. Not only has he appeared in a number of excellent British films but also in Hollywood productions including a role in 'The Bourne Ultimatum' (as the Guardian journalist near the beginning). And he even went to the same school as my daughters...

'Tyrannosaur' shows his talents as both writer and director – and it's first class stuff. Powerful, bleak, brutal stuff. It deal with self-destructive rage and domestic violence as it tells the tale of Joseph (Peter Mullan), a rage-filled, foul mouthed, violent drunk, who appears to seek redemption as he takes refuge in a Christian charity shop where he meets Hannah (Olivia Colman). But it emerges that Hannah has her own secret – she is the victim of appalling domestic violence from her outwardly respectable but abusive husband (played by the always excellent Eddie Marsan). The film plays out via the revelation of the revenge Hannah has taken to a – perhaps hopeful – ending which takes place a year or so after the main events.

This is not an easy film to watch and it certainly offers no easy or glib answers, but Paddy Considine certainly deserves the BAFTA he won for Outstanding Debut. 5/5 stars – highly recommended.

This movie is a misery-fest poverty-porn drama set 'oop north; with a mad drunk Scotsman and his unlikely friend. It is passable, but really, I was ticking off the social issues as it went on - it's as if the writer.director had a list, and went through all points one by one: alcoholism, tick; violence, tick; racism/Islamophobia, tick. Having said that, it's still worth a watch - but would have been better as a TV drama maybe. The main problem I had was that I just did not believe that the characters would meet and be friends, and I thought some characters were mere steroetypes too. And I could not believe events in the latter part of the film either. But, it's good enough - acting, directing are fine; it's over-written though and the writer is clearly trying to cram as many social issues in as he can - some of those scenes are not needed. In this, it resembles something from a left-wing theatre company on the fringe. Paddy Considine is a well-known and admired actor; this film is no disgrace, but I can't help thinkinhg he should stick to what he is clearly brilliant at.

One possible irritation: the title has little significance in the film but is a nifty marketing trick - it's eye-catching for sure. The marketers of the movie know that dinosaurs sell! I wonder if anyone went to see it expecting Jurassic Park? If so, the must have been well disappointed at the misery-fest on offer.

Not for me - Tyrannosaur review by BE

A stark movie with a strange outcome and which I found difficult to relate to. Good acting but really a movie I could have avoided

A film I rented due to the incredible critical praise for it, plus I had seen a bit of Peter Mullan's work, mainly with Ewan McGregor (Young Adam being a particular highlight.)

Mullan is absolutely amazing here, as is Olivia Coleman. I find it very difficult to watch films that in any way have extreme or sadistic violence towards women (whether shown on screen or alluded to by character's reactions/story) but that doesn't mean I shy away from watching them, precisely because I want to be challenged. Some of the best films I have ever seen are the ones which you leave afterwards feeling almost traumatised by, because you are forced to confront and process these dreadful things.

I almost don't want to say too much else about this film, because the less you know the more you have to gain and "enjoy" from it. But Paddy Considine is a great director and outstanding talent. For anyone who finds this film a bit too extreme, his second feature Journeyman is much more accessible and we are treated to an incredible performance from him.

Joseph (Peter Mullan) is a violent an angry man whose behaviour is heading him on the road to self destruction when a chance encounter with a Christian charity shop worker, Hannah (Olivia Colman) helps him begin to get his life back on track. Unfortunately Hannah has a secret of her own and its revelation has devastating consequences for their blooming relationship.

Interestingly the title does not refer to the explicitly violent actions of Mullen or of Hannah’s seeming perfect but secretly abusive husband James (Eddie Marsan) but is in fact the nick name given by Joseph to his late wife, a woman who, according to him, could make the crockery shake as she walked. This rather heartless and flippant identification encapsulates the depth of Joseph’s own personal damage, implying a strong sense of weakness and disassociation from a woman with whom he shared a bed for many years. This may sound like a common story to many and that is where the heart of this movie truly lies, in its honest and painful depiction of a man, almost unknowingly, in search of redemption.

A strong and compelling feature debut for writer/director Paddy Considine Tyrannosaur is a slow and sober probe into the emotional and mental foundations of self destruction, including a disturbing opening scene in which Mullen’s character kicks his own dog to death.

This sums the entire film up quite well really, this is not an easy film to watch, even the visuals are angular, wide screen and dizzying at times, yet it is ambitious in its depth and incredibly emotionally evocative; despite all good judgement on my behalf I found myself hopeful for Joseph’s future and this is due largely to the excellent directorial skills and acting talents of Considine and Mullen; who combined manage to bring a believable and multi-faceted character to the screen.