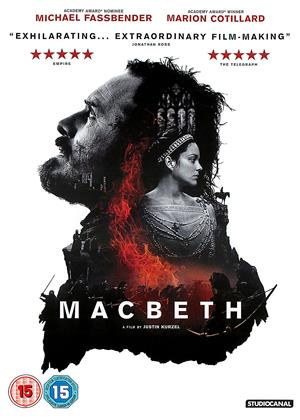 The trouble with adapting Shakespeare for the screen is that nowadays his plays are practically religious texts, and they have to be approached in a suitably reverential manner. Which isn't what he intended at all. If he was alive today, he'd be writing movie scripts, and I don't mean those melancholy little indie pictures about gay coal-miners that win a prize at Sundance but don't exactly set the box office alight, I mean mainstream blockbusters. Hitler. Nixon. Osama Bin Laden. Princess Di. And since he had no problem at all with writing plays about wizards and fairies, Disney would probably have hired him for "The Force Awakens". And what about Dracula or Batman?

These plays were meant to be popular entertainment, not some kind of solemn ritual venerating the sacred words of the Bard of Avon. The standard text of "Macbeth" includes a poorly-written and irrelevant scene modern productions often omit because it's thought to have been added by somebody else to increase the number of crowd-pleasing witches and ghosts; so basically it's the special edition where Greedo shoots first. Unfortunately, what we have here is an excellent cast treating the play so over-reverentially that it's no fun at all, and utterly fails to convey any sense that these are real people living in a made-up world that works on its own terms. In fact, the genuine Scottish Highland scenery makes the characters seem even less realistic.

Inevitably Shakespeare's language is now as archaic as anything else that's 400 years old, yet good actors can deliver it in ways that make it seem natural, even if some of the words sound odd. But in this adaptation, everyone, including the non-speaking extras, acts in an oddly stylized and terribly meaningful way almost all the time. I was reminded of "The Wicker Man", but that in that film, the fact that everyone behaves in such a stilted ritualistic fashion is supposed to stand out as deeply abnormal. Even "Monty Python And The Holy Grail" constantly reminds us that while the knights pursue their pointless quest, ordinary people are getting on with their ordinary (though equally silly) lives in the background. But this version of Scotland seems to be populated entirely by lugubrious chess-pieces.

The self-consciously arty lighting, in-your-face cliché modern camera techniques (lots and lots of slow motion, some of it ultra-slow), and constant droning "Celtic ambient" music don't help either. Kurosawa's "Throne Of Blood" from 1957 remains the best attempt so far to bring this story to the screen, even though technically it's about a Japanese warlord called Washizu and not Macbeth at all (presumably because if your leading man is Toshiru Mifune, it's a tad optimistic to cast him as a Scotsman). Even Roman Polanski's extremely flawed 1971 version is, for all its faults, a lot more fun. This is a film tailor-made for winning prizes at highbrow film festivals, then playing to audiences consisting of three pretentiously arty people who will absolutely love it, and one other guy who thought from the image on the poster that it was "Mad Max: Fury Road" and fell asleep.

Excessively dark and gloomy monotone version of Shakespeare's tragedy with much of the text removed. Michael Fassbender's Macbeth is wooden and lacking in any emotion save a sort of determined killer look. The self-doubt and guilt of Shakespeare's anti-hero seem entirely absent. Marion Cotillard's Lady Macbeth appears far too subservient and little more than a one-dimensional cipher. The mystery and magic of the three witches is completely thrown away. The Scottish accents of the cast are a refreshing approach to the drama but its poetry is lost in a quagmire of violence and cinematic cliché.

I rented this because I like the play Macbeth and the film had great reviews on Rotten Tomatoes. I wish I hadn´t. From beginning to end it is mostly very disappointing, a slow and turgid telling of the tale that is merely pretentious when it thinks it is being clever, and boring when it thinks it is doing something new with an old story. I did not give it one star because there were a couple of neat touches, but overall I would avoid it unless you are a real Shakespeare freak. A perfect example of how wrong film critics can be when reviewing ¨highbrow¨ films.

Worthy and atmospheric - watch at night - Macbeth review by HG

This is not a daytime film which I'm guessing is not a good thing in that although earlier interpretations have involved gross nudity and determined violence this one tones it down (a little) to get a 15 rating which suggests it's in part going for the GCSE market (given most of them are at least 15 and who's counting at that age anyway) but in doing so it opens up the afternoon slot on Film4 which is it's destiny. This would be a mistake because unless it's dark and you have a big screen (which thankfully you can get big enough at home these days) and decent sound you miss the experience which not really about the acting but more about the piece as a whole,the scenery, the mist, the dark. If you want the words go to the theatre - you can barely catch some of the lines in this and that is where it's going to lose the GCSE market - it such an interpretation that you need to watch it before reading the play and then try and work out where Justin got his thinking - it's not weird but it is embellished and actually well done. To be honest I really liked it and it's certainly brave but it's not going to help students because it's just not about the text. What it does show is how compelling Shakespeare's narrative is - Macbeth is the original Hitchcock - with the terror - the twist. It is a masterpiece and I doubt anyone will do it justice ever even with all the CGI,FX and slowmo full of both sound and fury.

If you’re looking for something relentlessly earnest, dark and grim, look no further than this version of Shakespeare’s Scottish play by director Justin Kerzel. The cast does its best with the difficult text but the talking heads soon bore, while the few battle scenes are drained of excitement by slo-mo and other stylised effects. Even the occasional Scottish Highlands exteriors are made to look dank and oppressive. The whole package, although undoubtedly well-intentioned, is completely lifeless. What’s meant to be tragic consequently comes across as merely dreary. It should carry an adult certificate because it will put children off Shakespeare for life.

With so many entries in the sword-and-sandal genre of action-based drama, no doubt spawned by the popularity of Game of Thrones, it was inevitable that MacBeth would be put up for such a treatment. The classically violent and dark nature of Shakespeare’s story is given the expected decadence of cold battlefields, darkly-lit kingdoms and brutal deaths. I can’t exactly say it’s an interpretation I was impressed with so much as a predictable production.

No expense is spared with trying to conceive a grim and dreary tone. An all-star is assembled that includes the stoic Michael Fassbender as the titular king, the always-a-joy-to-watch Marion Cotillard as Lady MacBeth and a surprisingly performance by Sean Harris as Macduff. They all deliver great performances that never feel off, even if they are perhaps being too subtle by whispering nearly all of their dialogue (or drowning it in screams and battle cries). Director Justin Kurzel has an amazing eye for cinematography, shooting in large fields and spacious kingdom halls. He doesn’t shy away from the violence either with deaths quite bloody and fires most bright.

But there just seems to be something missing from his adaptation. The story is very straightforward, the visuals beautiful and the action intense. But the consistent tone of the dreary perhaps doesn’t capture the true spirit of the writing. I kept waiting for Fassbender or Cotillard to deliver that one scene which made me marvel at their talents with such classic material, but it never came. On one hand, this would be beneficial for the production in how they stick close to their characters and the text. But why would I want to watch a production of MacBeth where these actors were not at their best?

Most of the scenes of death and action are shot in a non-linear fashion. This style has its moments of brilliance as with the scenes on the battlefield that give us different angles and shots between slayings. But then there are moments where it feels ill-fitting as when MacBeth murders Duncan. The movie cuts to shots before and after the stabbing, as well as shots outside and of other characters, as the stabbing takes place. Such editing felt better suited for a trailer than a film. The death of Duncan isn’t intense and dramatic enough?

This brings about the biggest issue with the movie is that it favors more of the visuals over the text. The sights of muted Scottish hills and deep orange fires are very pleasing to the eye, but the characters and their motivations do not match such epic displays. The dialogue is kept quiet and mumbled, almost as if the actors are embarrassed or fearful to be speaking old English. More devotion was put into making sure we can see their breath on the cold battlefield than the atmosphere of the original story.

In the sense of trying to create a more subtle interpretation, MacBeth comes off as both faithful and ill-fitting. While a technical marvel, it fails to capitalize on Shakespeare’s grand display of theatrics by relying more on soulful gazes into the cameras and less on projecting powerful lines. The last thing a theatrical display of MacBeth should have me doing is guzzling caffeine to stay awake and cranking my speakers to decipher the slurred and mumbled dialogue. There’s some genuine talent here, but it needs to wake up to be the masterpiece Justin Kurzel was aiming towards.