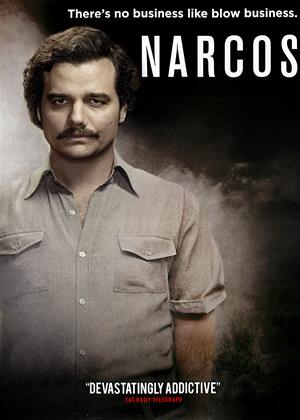 Up there with the Sopranos - Narcos review by MB

I cannot believe that nobody has written a review for this series.

It's up there with the Sopranos.

This is as good as series one, or maybe even better. EVERYTHING is right - the casting, the acting, the writing, the setting, the plot progression, the music. Filmed in Colombia too which is great, and I do not mind subtitles at all. So authentic and fascinating. The way real-life TV footage of 1980s and early 90s is spliced into the drama really works - which surprised me. But it works. It just does. We even see real TV footage of Pablo's mum at the end.

I would watch this all over again, It is that good. The only people who maybe should be worried are South American tourist boards as the place looks dodgy and dangerous as hell really, with massive violence and enormous poverty, and so a destination to be avoided. For me, anyway.

The Brazilian (I think) actor Wagner Moura plays Pablo Escobar with class and style - PERFECT casting. Even if the belly prosthetic and fake beard look a bit off. That is very common in TV drama BUT the locations here look so authentic. You can almost smell the humidity and heat, not to mention the crime, corruption and danger.

Wagner and the writers of course manage to make Escobar, a brutal charismatic drug lord who murdered so many so ruthlessly, a victim in the end. This can be done - as with Hitler in DOWNFALL of the TV drama about Saddam. And it works - these people are all just human. They were all babes in arms once...

It is sad to say but maybe a TV version of this not made by Netflix would have played it safe, and censored the name 'Blackie' for a start and maybe insisted on more female roles as they do these days - I am SO glad the producers of this did not defer to the diversity quota orders common now. Of course, in many ways, the very word 'Gringo' for all white people is racist... It is authentic though so why the problem?

The extras on disc 3 here worth a watch too. The only thing I would have liked more is some on-screen information at the end about what happened to the characters who got arrested and also to Pablo's family.

5 stars. if this series has not won awards then it has been robbed.