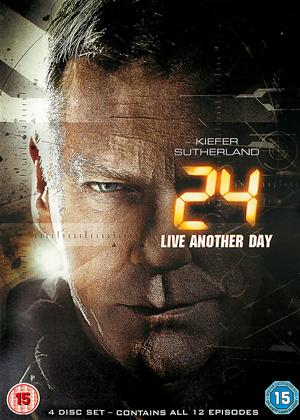 Reviews of 24: Live Another Day: Series

From the hit series 24, comes 24: Live Another Day, also referred to as Day 9. The show was so successful they decided to resurrect it, and audiences are in love. Even though it is only twelve episodes, the exciting story keeps us entertained, and still has audiences wanting more.

The series begins four years after the last season. Jack Bauer (Kiefer Sutherland) is living in London, but is thrust back into the world of life-or-death when he needs to once again play the hero and squash another terrorist plot. Friend and foe continue to cross paths with Bauer, and it is a race against time to prevent not only an attack on home-soil, but prevent the world from plunging into another war.

It has been four years, and yet the actors are still keeping us watching. Kiefer Sutherland has had an up-and-down film career, but has definitely found where audiences and critics want him to be. Whether or not he is growing bored with the character, I do not know, but he is still giving it his all. Sutherland’s co-stars (Yvonne Strahovski, Michelle Fairley, and William Devane, among many others) were also very good. The only problem with having such a great supporting cast, is that they took a lot of focus from Jack Bauer, so we do not get as much of his character arc as we would have liked.

For those that loved 24, you will not be disappointed. The cast and crew have all worked incredibly hard to ensure it feels like the original series never ended, but is still refreshing. It keeps itself modern, with the inclusion of current-day politics and worries about drone technology. This all helps to connect with the audience, and we start to care more about what is going to happen.

You will also be hard-pressed to find fault with the action scenes. That is something they have always done well, and you will not be disappointed.

It was not all perfect. As with all television series, some episodes are better than others, and it had its moments of dragging.

There was a lot of promotion regarding this new series, and it was unknown whether audiences and critics would like it as much as they had loved the prior seasons. They have. 24: Live Another Day has received a very positive audience response and online reviews.

I do not think there are many people out there that won’t like this series. For fans of the series, you will be happy they have heard you crying out for more, and brought us back into that world, for however little time we get. All in all, it is worth a watch, and I give it a much deserved four out of five stars.