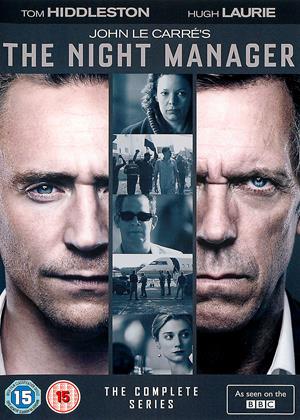 Reviews (4) of The Night Manager

This series gets off to a cracking start, with Tom Hiddleston very effective as the charming fellow with hidden depths who tries to do the right thing, and then has to live with the consequences. The problem is that there are five and a half hours to fill, and not really enough plot to fill them. Our hero's obsession with certain unfortunate events leads him to do some very questionable things indeed. However, the entire issue of who he really is gets brushed under the carpet in a way it never would have been in John Le Carré's earlier work. It's true that this is lampshaded by having various people literally ask him "Who are you really?" far too often, usually listing the various aliases he's accumulated thus far, but in the end there's none of the moral ambiguity present in "Tinker, Tailor, Soldier, Spy" or "The Spy Who Came In From The Cold". The good guys are entirely good so it's OK if they do bad things sometimes, and the bad guys are one-dimensional monsters, apart from the Very Bad Guy, who manages to pretend not to be a psychopath most of the time, so therefore he has two dimensions.

Of course, viewers being stupider than they were a few decades ago, much of the message is put across via the magic of Diversity. Hugh Laurie's alarmingly convincing psycho arms dealer (his days of doing sketch-shows with Stephen Fry seem very long ago indeed!) shows us he's bad by being a racist, though what with him illegally selling nerve gas to dictatorships and having people tortured and murdered and such, by the time he reveals this I already suspected that he wasn't a very nice man. Whereas Tom Hiddleston goes out of his way to be best mates with every available ethnic minority, and his supporting cast of secondary good guys seem chosen purely for their tick-the-box diversity, as if this automatically makes him a splendid fellow. Which is horribly lazy writing.

Hiddleston carries the whole thing and takes the acting honors, while so obviously hoping to be cast as the next Bond on the strength of this performance that at one point he even orders a vodka martini. Actually he'd be very good as Bond. But I digress. I'd have liked to see him being allowed to explore his character's moral grey areas a lot more, but maybe that would have lowered the viewing figures because who wants to have to think while watching TV? Laurie is as good as he can be playing a cardboard cliché. The very tall blonde girl with the pixie cut is basically there to lose her clothes, which she does extraordinarily often. Sometimes the cameraman clean forgets to include her face in the shot. It's like the racism thing. Yeah, I got why the hero might find her attractive the first time she found an excuse to undress in public, but it's been ten minutes since we last saw her model something from Victoria's Secret, so here we go again! And the actress playing the not only female but also heavily pregnant George Smiley substitute (diversity!) is so bad she often pauses at odd moments as if she's reading from an autocue.

It's got some splendid things going for it at the beginning, but it sags badly in the middle, and by the end it's trying unsuccessfully to be clever and Die Hard-ish simultaneously. There was a time when you didn't see John Le Carré's plot-twists coming. Not any more. "Tinker, Tailor, Soldier, Spy" needed a TV series for the slow-burning, convoluted plot to build, and the movie compressed it until it was more style than substance, and sometimes hard to follow. Here it's the exact opposite. I suspect Le Carré wrote the book with a cinema adaptation in mind, because to stretch it to the length they have, they end up forcing us to admire an awful lot of scenery; the camera seems us to be almost as much in love with Majorca as it is with Exhibitionist Pixie Chick. In the bits where it gets moving, it does just what it ought to. But there's way too much padding in between.

Bit of an update on Tinker Sailor. That was a major series in its day. This is done very well. Many hours, but pretty seamless when watch it.

Keep thinking of Hugh in Blackadder as the Prince Regent, but he plays his part very professionally. Come a long way since Adder, and developed many TV skills in the States.

TV drama at it's best - The Night Manager review by LS

I watched this when it first came out on tv & really enjoyed watching the first part again. Superb plot & the acting was spot on from all concerned. I'd recommend it to all.

This is my first experience with John Le Carré's work, but I have for many years heard his name mentioned with reverence for the powerfulness of his writing and characters.

But I didn't first hear about this series because of Le Carré's novel or characters, but rather that this series was the most blatant attempt possible by Tom Hiddleston to be cast as James Bond. And that is, from his performance, the predominent thing which I can say about him in this. He is straining every sinew to basically yell out from the screen "I can be Bond!!!" This is not to put down Hiddleston's acting abilities for a second and certainly the chemistry he shared with Elizabeth Debicki was powerful and drove the love story forward. But the audition aspect was always lurking in the background. And for me, in many ways that overshadowed everything else with his performance, especially when sharing the screen with Hugh Laurie and/or Tom Hollander...

These two actors literally dominate the screen for every second they are on it. Laurie is so far away from his roles in Blackadder and Jeeves & Wooster that you question whether they were played by the same person. Like Sir Ben Kingsley in Sexy Beast, Laurie's Richard Roper is a sociopath; utterly evil and without mercy, no hint of humanity or morality as he sells weapons of war to the highest bidder. Roper also knows exactly what he is and the depravity he is responsible for, but dismisses it as purely business.

And Hollander is the coiled spring, who straight away sees through Hiddleston, constantly circling him and goading, leaving him and us to wonder when he was going to strike. The mix of violence, threat and sexuality all combined perfectly and his BAFTA award was richly deserved. Hollander is such a talented actor with these types of roles that you wish he was cast more in them. When both him and Laurie were on screen, you relish the spectre of two actors at the top of their game.

The rest of the cast, as well as the locations and production values are also great. It was clear that there was a large budget for this production and Susanne Bier puts every penny of it up on the screen. The colour palatte in particular and the cinematography were first class. Locations were also varied and well-used.

Whilst many people may be watching for Hiddleston, within minutes of Laurie and Hollander appearing on screen, it flips 180 degrees and despite his best efforts, they are who you'll remember