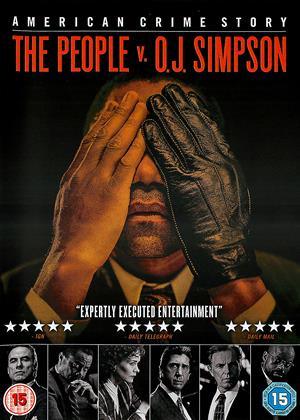 More like The People vs. O.J. Simpson: American Crime Story

Reviews (2) of The People vs. O.J. Simpson: American Crime Story

The acting is excellent (Travolta is superb) and brings back to life this hugely disturbing trial and the events surrounding it. In an era of fake news, 'The People...' reminds us that truth has in America long been viewed through the prism of cultural factors , with 'race' being of particular importance. The series is well paced, rarely flags, and is well worth watching despite knowing how things end.

This is of course the story of one of the strangest trials in legal history, which began with one man being tried for murder, and basically ended up with everybody except the defendant on trial for everything except murder. And there can't be anybody on the planet who doesn't know the verdict, other than people who aren't very likely to rent this because they live in a grass hut in the jungle. Presumably for legal reasons, never once in the entire series are we told straight out that OJ did it, nor are we shown the actual crime, which, given its brutality, is probably just as well (if you're squeamish about that kind of thing, you might like to know that gory depictions of the crime-scene are kept to an absolute minimum). But we're left in no doubt whatsoever that, whatever the jury said, OJ is guilty as hell.

The opening episodes are five-star brilliant, as everybody struggles to get to grips with the unfolding events, including the bizarre slow-motion car-chase involving the infamous white Bronco. John Travolta, who also produced the series, is fantastic as gleefully amoral showbiz lawyer Robert Shapiro, a man whose previous incarnation was undoubtedly a great white shark. Unfortunately, Travolta's character subsequently gets pushed into the background just as he was in real life, and we spend more and more time with the two prosecuting attorneys. This is understandable, since otherwise there would be no lawyers who aren't hypocrites, or major black characters who are neither hypocrites nor murderers, but unfortunate, since these two are far less interesting than the more morally dubious persons involved. And wouldn't it be nice just once for an American drama not to involve anyone whose messy divorce intrudes itself into a plot which isn't about divorces at all?

As for OJ himself, he's portrayed effectively but one-dimensionally as a blubbering man-child whose waterworks are motivated by self-pity, and since we can never be directly told or shown that he's guilty, he remains an enigma. Though personally I'd always have doubts about anyone who had a larger-than-life statue of himself in his own garden. However, the underlying issue - a very angry subsection of American society voicing their profound discontent with the establishment by rallying round a terrible person just because he represents opposition to The Man - is highly relevant right now. Though I doubt there's much crossover between people who think OJ is innocent and Trump supporters.

Overall, this is an extremely effective drama which inevitably flags a bit in its later stages, because, unlike fact-based movies such as "Apollo 13", where the action occurs over a few days, just about everything which can honestly be called action takes place in a very short time (and we don't even get to see the most dramatic event of all), and then a year of incredibly slow-moving legal proceedings has to grind past before we reach the conclusion we already know. And in the process, the most important moral issue - is it ever acceptable for somebody who has done something truly dreadful to be falsely exonerated because it strikes a symbolic blow that might do enough good to outweigh the initial evil? - becomes repetitive, and is partially buried under a lot of personal baggage, not all of it interesting, which you sometimes feel they're tiptoeing around because most of these people are still alive. Also, most of them are lawyers. And if this series tells us anything, it's that the USA is a particularly bad country in which to get on the wrong side of lawyers!