3.0 of 5 from 45 ratings
Unknown
Sign up
Play trailer
Gallery 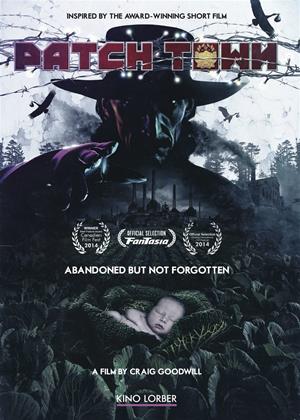 Sign up
Last Will and Testament of Rosalind Leigh

Patch Town exists as a movie that is stitched together from too many half-ideas. Sometimes it appears as a police state musical. Othertimes it’s a weird and whimsical tale of dolls born from cabbages. And sometimes it becomes a comedy too quirky for its own good. Having seen a great deal of movies from all genres and tones, there are points when my memories of all these mesh together into a blur. Patch Town is my hazy dreams born from the forgotten films that tried too hard.

The movie seems to suggest a dystopian society where the working class are slaves to a factory. They toil endlessly on a line of cabbages which birth living babies to be sold as toys. Having babies in this society is apparently outlawed and taking babies off the assembly line results in brain scrambling by the sinister Child Catcher (Julian Richings). It sounds simple enough, but then things are overcomplicated with a backstory of the cabbage babies that are born human, transformed into dolls and then turned back to humans to work in the doll factory.

But, wait, it gets even more convoluted. Baby snatcher Jon (Rob Ramsay) and his wife escape to the world outside the cold walls of the baby making dictatorship. It can’t be any worse, they figure. They figure right as it turns out the world outside the factory is a modern society of consumerism. Where does the doll factory dictatorship fit into this type of world? Don’t question that - it’s time for a joke and a song.

In bits and pieces, there are parts of Patch Town that work well. The songs are decently sung by the cast who have some operatic vocals, but there’s too few of them to fully enjoy the movie as a musical. There’s some decent comedy with a whimsical sense echoing that of Pushing Daisies, but it’s just as uneven as everything else in the picture. If the filmmakers had just picked one path to play and do it well, there could have been something to be invested in with this movie. Instead, it comes off as three or four different movies smashed together into a confusing mess of dystopia and quirky comedy.

It’s not that the movie is terrible so much as it is just too much. Jon was once a doll and remembers his childhood mother from his days as a toy. Now a human with wiped memories, he’s astonished to finally remember his mommy and seek out the now grown woman with her own kid. It’s a silly premise better build for a TV movie, but could have had a chance to be more if it was given attention. It’s too bad it becomes mostly muddled in a plot about playing Santa, kidnapping preteens and staging a revolution. You could swear that you heard some commentary on consumerism and family in all this mess, but it’s hard to hear over the sugary gags and musical sequences.

Patch Town is a movie assembled from spare parts of better movies to form a lukewarm creation. As the first feature of director Craig Goodwill, he clearly has plenty of ideas and an eye for style in his direction. It’s evident in the short film of the same name he directed years earlier. He clearly has enough creativity for a few good movies of various genres. I just wish he didn’t have to make them all in one production. As a result, Patch Town wears his talent too thin and begs for him to slow down. Throwing everything at the screen creates a rather confusing story that will have more viewers scratching their heads than smiling at its quirks.