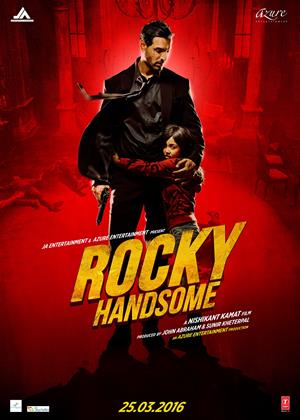 Synopsis:
The movie is set in the middle of a city in Goa, where Kabir "Rocky" Ahlawat (John Abraham) lives a quiet life running a pawn shop. His next door neighbour is Anna (Nathalia Kaur) who is a drug addict and a bar dancer. She lives with her little daughter, Naomi (Diya Chalwad), who steals to fund her habit. Naomi develops a caring relationship with Rocky and calls him "Handsome" affectionately. Rocky gets attached to her too and she frequently eats dinner with Rocky despite her mother's disapproval.
Meanwhile ACP Dilip from the Anti Narcotics department of the police force wants to clear the drug businesses out of Goa and finds out that the main drug kingpin is Mantoo, who runs the entire Heroine business in Goa. He is supported by two powerful brothers, Kevin and Luke, who not only deal drugs but also control a mass racquet in organ harvesting and who have a professional assassin called Attila who carries out the brothers' commands. One night Anna and her accomplice plan to steal drugs from a consignment which is to be handled by Mantoo's henchmen Bigshow, and his local peddler. They succeed in doing so and Anna hides the drugs in a camera and pawns it to Rocky. The loss of the consignment enrages Mantoo and he summons Kevin to his place and humiliates him, giving him three days to recover the sample consignment. A humiliated Kevin walk backs and calls his brother Luke to find out about the stolen drugs. Luke and Attila discover the truth and reach Anna's place where Luke tortures Anna and finds out that she has pawned the camera to Rocky. Luke sends Attila to recover the camera where he finds Bigshow and the peddler already fighting with Rocky for the possession of the camera. Rocky injures Bigshow but is obliged to hand over the camera to Luke when he tells him that both Naomi and her mother are his captives. Before leaving, Attila shoots Bigshow dead to frame Rocky guilty and leaves a cell-phone, indicating that Rocky will receive a call shortly from his bosses. Rocky gets a call from Kevin to make a delivery to Mantoo, and promises that in return he will set Anna and Naomi free. Rocky goes to deliver the drugs to Mantoo where he finds that police had already raided Mantoo's haven with a tip-off from Kevin. Kevin calls Mantoo and tells him that he is doomed and Kevin is the new drug lord of Goa. Mantoo runs away from his hideout and Rocky chases him, but he is arrested by police and they were shocked to find Anna's body with all her organs harvested in Rocky's car. Meanwhile, Kevin finds Mantoo and brutally murders him, taking all his organs. During interrogation, Rocky escapes from the police station, beating all the guards up on the way out. The police are bewildered by his combat skills and find out that he was a former RAW agent/Special forces (Black ops) soldier with numerous commendations, who retired after he was wounded and his pregnant wife, Rukshida (Shruti Haasan), assassinated. Rocky reaches a nightclub in his investigation and beats the peddler's bodyguard up, stabs the peddler to death and fights with Attila. In the fight, he is shot by Attila and gets critically wounded. He reaches a medicine shop, breaks the lock and performs an impromptu surgery. Rocky then acquires a gun and continues on his journey. Rocky finds and frees several child slaves in a drug manufacturing plant, and in the process, kills the younger of the brothers, Luke, with a gas cylinder blast. He tracks down the elder brother, Kevin, at the gang's condo, where a dozen gang members and Attila are also waiting. Kevin says that he has had Naomi killed and shows a container that has what he says are her eyes. He demands to know what happened to his younger brother, and, in a rage, Rocky kills the gang members brutally, including Attila. Kevin run away in his bullet-proof car but Rocky stops it and smashes the windscreen with multiple bullets. In the process Kevin is also shot and a bullet hits the leaking oil from the bullet-proof car.
As Rocky
Actors:
John Abraham, Shruti K. Haasan, Nishikant Kamat, Nathalia Kaur, Nora Fatehi, Teddy Maurya, Suhasini Mulay, Diya Chalwad, Sharad Kelkar, Bobby Bedii, Kazu Patrick Tang, Nachiket Purnapatre, Jayant Sawarkar, Kunal Naik, Abhijeet Chavan, Shyam Pakakillath, Shiv Kumar Subramaniam
Directors:
Nishikant Kamat
Genres:
Bollywood
Countries:
India, Bollywood