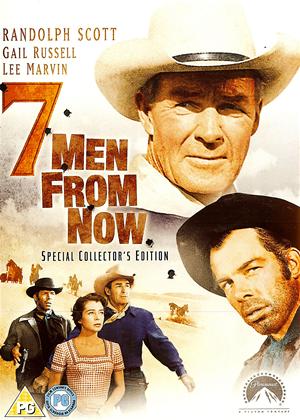 Reviews (2) of Seven Men from Now

One of several surprisingly gritty fifties westerns from director Budd Boetticher, this is a fine example of the genre before the Italians turned it up to eleven a few years later. Randolph Scott is excellent as the ex-sheriff relentlessly tracking down the seven men responsible for the robbery in which a stray bullet killed his wife, something which motivates him so strongly that as far as he's concerned, the fact that they got away with a huge sum of money as well is just a footnote. But Lee Marvin is even better as the utterly amoral gunslinger on nobody's side but his own, to whom that box full of gold is all that matters.

Cleverly, the script makes Marvin's character somebody who wasn't involved in the robbery that killed Scott's wife, merely an opportunist hoping to grab the gold by being the last man standing, therefore Scott understands that, scoundrel though he may be, Marvin isn't going to shoot him in the back, and may even help him, so long as this will whittle down the number of people between him and the gold. But of course, when it gets down to just the two of them, as we know it must... Watching him here, you can see why Sergio Leone wanted Marvin to play Angel-Eyes in "The Good, The Bad And The Ugly" (Lee Van Cleef ended up in the rôle only because Marvin had already signed up for "The Dirty Dozen"). He's magnificently nasty, yet oddly insecure, constantly practicing gimmicky fast draws and rearranging his guns like a little boy playing at being a cowboy. Except that the guns are real, and the man holding them has no problem at all with using them.

The inevitable romantic subplot, and the equally inevitable man the girl is initially with who doesn't deserve her because he's a dishonest coward who might as well be wearing a Star Trek red shirt, get in the way of the action a bit too much as they so often did, but the character who threatens to become the dreaded sidekick we're meant to find funny appears in one scene and is never mentioned again, for which I'm sure everyone who has ever watched this movie is profoundly grateful. Overall it does its job very well, with two top-notch performances in the rôles that really matter. It's just a pity that it sags in the middle, when the men Scott's supposed to be hunting, most of whom are still alive, are almost forgotten about while he struggles with his attraction to a married woman. But characters complex enough to sometimes get sidetracked in ways that aren't as exciting as they might be are better than characters whose sole purpose is to live or die as dictated by the stereotype indicated by the color of their hat.

Not a manhunt in sight, more a slow-moving sequence of horses, wagons and a male/female attraction, all preparing for a showdown where you knew what would happen, but there were two twists in the story that made it more interesting than any other standard 1950's B-western.

What was the point of the Indians in the film? Or the Old Timer and his donkey in the way station? Two scenes that were meaningless, irrelevant and a distraction.

This film took far too long to even get started to keep an interest.

Acting was fine from Scott and Marvin but Gail Russell was going through the motions as an irrelevant appendage to the film and you could have imagined Doris Day or any other actress of the period doing exactly the same job, with the same script in the same voice.