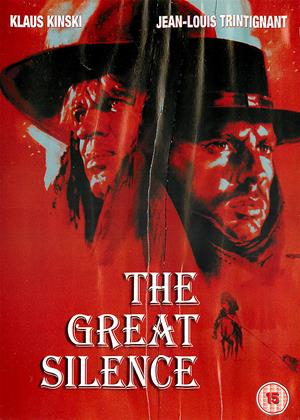 Reviews (1) of The Great Silence

Although he never quite had Sergio Leone's extraordinary visual flair, Sergio Corbucci, the other great director of spaghetti westerns, had a much more active social conscience, and he usually tried to put across some kind of political message, therefore the plots and characters in his best films tend to be more complex than the usual "impossibly competent hero shoots lots of men who deserve to die" structure of most spaghettis.

This movie is Corbucci's most serious western, and despite the inclusion of various spaghetti tropes - ridiculously good shooting, gimmicky weapons, Ennio Morricone music, several familiar faces from the Dollars Trilogy - just about everything you expect from a film of this kind is turned on its head, right from the very first shot of a lone horseman riding across not a sun-baked desert but a frozen snowscape. It's no accident that just about every shot feels chilly, and the characters frequently comment on the lack of warmth. This a cold, cold film, where goodness is a handicap in world without mercy or compassion.

However, its inhabitants are a fascinating bunch. Although the hero, who isn't called Silence for nothing, is a bit of a nonentity, just about everybody else manages to break out of the expected stereotypes, even if they're only a very minor character. In particular, instead of being either a useless coward or a lackey of the baddies, the sheriff is a brave and genuinely good man who is unfortunately not too bright, therefore his sincere attempts to do the right thing invariably backfire in hideously ironic ways. This also makes him a rare example of a comic relief buffoon whose well-intentioned bumbling has realistically dire consequences.

Since the hero not only makes Clint Eastwood's "Man With No Name" seem like a motormouth, but spends a fair bit of the film in bed because, in yet another trope inversion, severe injuries are just as disabling for him as they are for normal people, the real "hero" is Klaus Kinski's Tigrero, a disturbingly convivial psychopath who is by far the smartest person in town, and never once does anything that a real villain wouldn't because the script's forcing him to implausibly give his enemies at least a halfway sporting chance.

It's not quite a masterpiece, and it does get a bit depressing at times, but this is certainly one of the most unusual and mould-breaking westerns ever made. The ending in particular is so off-kilter that the studio insisted on Corbucci reshooting a much more conventional climax. In the end it was scrapped because they had to admit that in the light of everything that had gone before it just looked absurd, but you can see that alternative final scene as a DVD extra. This is an important western and a hugely important spaghetti western, and is therefore highly recommended to anyone who likes that kind of thing.

By the way, unlike many DVD releases of spaghetti westerns, this is the original Italian-language version, though if you hate subtitles, you can opt for the usual horribly-dubbed English on the sound menu.