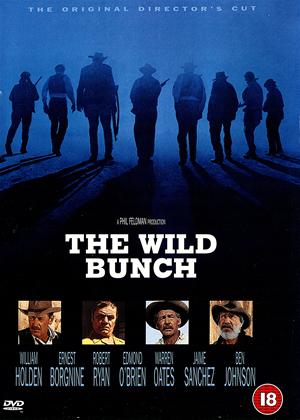 Reviews (3) of The Wild Bunch

This movie really was a game-changer. No previous western had been so unflinchingly gory, apart from "Django" and its even more outrageous quasi-sequel "Django Kill!", both of which were banned throughout the English-speaking world, and in most other places too. But this film has none of the bizarre stylistic flourishes and impossible gunplay that divorce spaghetti westerns from reality. In a tale based very loosely on the exploits of Butch Cassidy and the Sundance Kid, whose gang really was called the Wild Bunch, middle-aged outlaws living in the last days when the west was truly wild have to accept the fact that they're obsolete. Unfortunately, the final bank job that was meant to provide for their retirement doesn't go entirely according to plan, and we're very soon treated to our first sight of technology that truly shocked audiences in 1969 - the squib and blood-bag that allow bullet-wounds to spurt copious amounts of gore. In the course of the movie we shall see a great deal of this, often in slow motion.

If that's all there was to "The Wild Bunch", those critics who at the time dismissed it as cowboy torture porn would have been right. But that's not really the point of it at all. The violence has to be realistically ugly to remind us that killing other people isn't glamorous or fun, and is very seldom heroic; right from the start, innocent bystanders tend to get fatally caught up in shoot-outs. The "heroes" are selfish, ruthless villains who are all to some degree evil, or at least willing to do evil things. And some are more willing than others. Yet they have a strange kind of decency, and there are lines they won't cross. In particular, their sometimes fragile but in the end absolute loyalty to each other is, as William Holden at one point states explicitly, what separates them from animals.

It's also what separates them from their less honorable counterparts, the barely human bounty hunters who pursue them throughout the film. This ugly mob are the movie's biggest flaw; comical grotesques like these belong in a far less serious and realistic western. But otherwise, the acting is almost universally excellent, as is the characterization. Even the repulsive megalomaniac "General" Mapache is given a scene where we see him at his best, and understand why hundreds of men are willing to fight and perhaps die for this alcoholic buffoon. What matters is that the film passes the acid test of good fiction about bad people; you don't like them, but you care what happens to them. That's not an easy thing for either a writer or an actor to achieve. Neither is making Django look like a wimp, but the apocalyptic final showdown manages that too. It's ultra-violent and extremely macho, so it isn't for everybody, but it's one of the most important westerns ever made, and in any genre a truly great film.

A classic, violent Western on the Mexican frontier - The Wild Bunch review by Philip in Paradiso

This is a classic in the Western genre, with a twist. For a start, most of the action takes place along the US/ Mexico border or in Mexico itself. A group of ageing outlaws are trying to achieve one last 'score' before retiring, and find that there are more options on Mexican soil than in Texas: the story takes place against the backdrop of the Mexican civil war (involving Pancho Villa).

The film was a sensation, when it came out, because of the level of graphic violence and the pile-up of dead bodies -- something we are used to today. The lead characters are actually depicted in some detail, so that they are not cardboard caricatures, with good acting, sharp dialogues and humour. The story is dark and the characters are cynical: there is no idealism here and the old West is dead...

What you will remember, ultimately, are the shoot-outs and action scenes, which are amazing, more particularly the attack on the military train, along the US/ Mexico border, which is remarkably well shot. The last piece of mayhem, at the end of the movie, is distinctly over the top and requires a certain suspension of disbelief, however.

This is one of the finest American motion pictures that's ever been made. Director Sam Peckinpah's masterpiece that set the tone for the future of the western genre but more importantly it's a film that deconstructs the legends and myths created by Hollywood of the history of the American frontier. The themes of contradictory loyalties and the absence of any recognisable code for the protagonists goes against everything that filmmakers like John Ford or Howard Hawks presented (John Wayne is said to have hated this film). For a start the setting is unusual, this is set in 1913/14 on the Texas/Mexico border. A violent civil war is raging in Mexico as rebels are attempting to overthrow the corrupt and dictatorial government. A small gang of criminals led by Pike (William Holden) flee across the border after a robbery of a railroad office goes awry. They are being pursued by a motley bunch of mercenaries hired by the railroad to catch or kill them all. Desperate the gang agree to rob an arms train for a Mexican General but the decision to give some of the stolen guns to the rebels results in the bunch having to decide on what they want from their wasted lives. The film has two very famous set pieces that bookend the film; an opening gun battle as the gang's robbery in Texas goes wrong and a climactic battle against overwhelming odds that finishes the film. This is often thought of as a gratuitously violent film but this is not so, indeed by today's standards it's quite tame, but it is one of the first films to use squibs to simulate gunshot wounds and became controversial as a consequence. But actually the film's depictions of death are balletic with Peckinpah using a unique style of cuts and slow motion to highlight the majestic nature of the action. It's been much copied since but never as good as here. There's been whole books written just about this film which highlights the high regard in which it is held. It is a genuine film masterpiece, a film that has much more going on than a casual viewing reveals. It rarely gets any better than this.