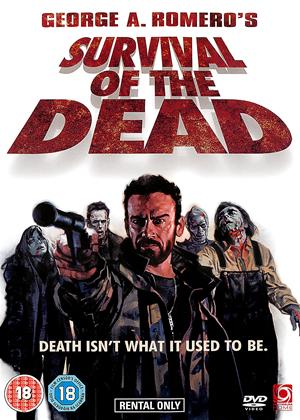 Synopsis:
It's been less than a week since the dead began to walk, and the world has gone to hell. The rule of law is disintegrating. The military is in chaos. A war-weary band of soldiers goes AWOL, convinced they'll be better off on their own. Led by Sarge, a tough, chain-smoking guardsman, their only ambition is to survive. They are lured to a remote island that promises to be the last paradise on earth, only to discover that even here, miles away from civilization, there is no escape from a world at war. The battle follows overtakes everyone on the island, living and dead, and poses a new meaning for the word, "survival".
Actors:
Alan Van Sprang, Joshua Peace, Hardee T. Lineham, Dru Viergever, Eric Woolfe, Shawn Roberts, Scott Wentworth, Amy Lalonde, Michelle Morgan, Joshua Close, Mitch Risman, Kenneth Welsh, Julian Richings, Wayne Robson, Kathleen Munroe, John Healy, Philippa Domville, Kristina Miller, John Fleming, Richard Fitzpatrick
Directors:
George A. Romero
Producers:
Paula Devonshire
Writers:
George A. Romero
Studio:
Optimum
Genres:
Horror, Thrillers

Reviews (2) of Survival of the Dead

Romero back to his best. - Survival of the Dead review by CP Customer

After the fairly average 'Land Of The Dead' and awful 'Dairy Of The Dead' I had pretty much written off George A. Romero as a director who was out of ideas and just rehashing his old movies. 'Survival Of The Dead' is though is a real return to form for Romero and a surprising good film to boot. The storyline is simple and well paced, with good characters and a nice balance of drama and gore. Overall, this is a genuinely enjoyable horror film which shows Romero back at his best.

Spoilers follow ... - Survival of the Dead review by NP

One thing I like about George Romero’s ‘Living Dead’ series (this is his sixth), is that he doesn’t shy away from writing what you don’t expect, and instigating new angles with which to approach fashioning his zombie world. One thing remains true, though: firearms – you can achieve a lot if you carry a gun. If not, you ‘don’t got no chance.’

That’s not to say things here are entirely successful. But they are original. Actual tension is lacking, due to the fact that – as established a few films back – zombies are just part and parcel of society. Dark humour partly makes up for that (the character Crockett lights his cigarette from a burning zombie before tipping him into the sea, etc).

Two feuding Irish families eject poor old Patrick O’Flynn after he rejects their notion of keeping the living dead from permanent death in the hope of one day finding a cure. With a group of mercenaries, O’Flynn returns to the island to find zombies chained up in environments of an approximation of their past lives. Kenneth Welsh plays O’Flynn as a mischievous rogue who is difficult to dislike.

O’Flynn vows revenge on Seamus Muldoon (Richard Fitzpatrick), and it is this distraction that provides the main thrust for the story, although other interesting things are going on with other characters too. The ‘hero’, Sergeant Crockett (Alan van Sprang) is a good shot, but slightly less interesting than the others. And yet none of the characters are written with a huge amount of depth – possibly the living dead themselves have more pathos as we see them going about the business of their former lives (a postman endlessly posting and removing a handful of letters, for example) whilst manacled.

Instead, typically with Romero’s later films, the main spectacle is a world ravaged by living dead, and still adapting to a new way of life. This is achieved very successfully, the endless realm of death and destruction made to feel depressingly normal.

‘Survival of the Dead’ has received mixed reviews, mainly it seems, from Romero fans. I really enjoyed it. The zombie holocaust acting as a backdrop of sorts to other stories is a brave and original thing to do, flying in the face of those who perhaps wish to see more traditional guts and gore – two things ‘Survival’ also possesses, by the way. It seems when anything acquires a ‘fandom’, it leads to unnecessary negativity from those who are irritated if they don’t see their own ideas and preferences worked into the mythos. Romero plans at least two more ‘Living Dead’ films – I really hope these happen.