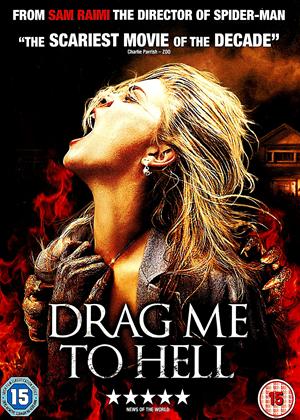 Synopsis:
Christine Brown is an ambitious but kind hearted loan officer with a charming boyfriend. But when she denies an old lady as extension of her home loan, she has no idea of the terrifying consequences in store. With a powerful curse placed on her by the enraged pensioner, Christine is given just three days before she will apparently be literally dragged to Hell. As her date with fate approaches, Christine is desperate to break the curse while being increasingly plagued by horrifying nightmares and apparitions. Will she escape eternal damnation? There’s only one way to find out.
Actors:
Alison Lohman, Justin Long, Ruth Livier, Lorna Raver, Dileep Rao, David Paymer, Adriana Barraza, Chelcie Ross, Reggie Lee, Molly Cheek, Bojana Novakovic, Kevin Foster, Alexis Cruz, Shiloh Selassie, Flor de Maria Chahua, Christopher Young, Ricardo Molina, Fernanda Romero, Joanne Baron, Ted Raimi
Directors:
Sam Raimi
Voiced By:
Art Kimbro
Writers:
Sam Raimi, Ivan Raimi
Studio:
Lionsgate Films
Genres:
Horror

Reviews (5) of Drag Me to Hell

I really enjoyed this but felt sad for the young loans officer. She was only doing her job! Still that's what ambition does for you. A really unexpected ending for me. Definately worth a watch.

ok - Drag Me to Hell review by CP Customer

An excellent old school horror. - Drag Me to Hell review by CP Customer

Despite not making a horror film for over 13 years ‘Drag Me To Hell’ is an excellent return to the genre from writer and director Sam Raimi. Like most horror films the plot is paper thin, a sweet natured bank loan officer named Christine is forced into taking harsh decisions to be in with a chance of promotion for the vacant position of assistant bank manager. After refusing a home loan extension to an old woman who faces being evicted from her home, the old lady begs for mercy, and when still refused help she accuses Christine of shaming her and then places a curse on her. After visiting a fortune teller named Rham, he tells her she has the curse of Lamia upon her and after three days on increasing torment Lamia will return and take her to hell unless she can appease the evil spirit. Despite the thin plot this is an excellent old school horror which is somewhere in style between ‘Polergiest’ and ‘The Evil Dead’. Sam Raimi cleverly paces the film and throughout the tension is cranked up and released in plenty of jump in your seat moments. There are some nice twists and turns in the storyline as Christine tries to find a way out of her curse, though most people will be able to predict the outcome; but one of the most impressive things about the film is the subtle use of CGI and old school real time effects, the computer generated effects never overpower the film and the clever use of old style real time effects will appeal to anyone who was a fan of Raimi’s ‘Evil Dead’ series. Overall, this is a fun and often tense horror film, not the scariest thing you’ll ever see, but if you’re a horror fan it’s pretty much hard not to like.

For Evil Dead fans this will have to do. Sam puts Alison through the grinder as she is tormented by a demon intent on taking her to hell. The outline is predictable and you can guess as to what is going to develop next. However Raimi displays his customary skills by inventing unique ways of molestation. There are numerous problems, as despite her best efforts Alison doesn't have the skill or charisma to carry of this role. The ending feels out of place and the special effects are badly implemented. It seems they are no match for models and skillful stunts. Yet Drag Me To Hell is a fun romp and an ideal rental. It is far from classic Raimi; perhaps we've been too generous with his return to the horror genre. The competition is sadly weak nowadays and this is far from his best work.

American Banking nightmare - Drag Me to Hell review by joannajuki

We could feel sympathy for the old hag, but of course we don't because she's "Carrie", grown old, and we do feel sorry for the pretty loans officer, even though she repossessed out of dutiful obligation to the banking system.

I will say this for the film - I have never seen institutional sexual discrimination so accurately portrayed. Here is a young woman who is working hard and trying to make her way in the world, and always having to work twice as hard as the man who can so easily schmoozy with the boss.

Is that why she played hardball against a poor granny, was it a personality clash or culture clash? We never know - but I could relax about the horror, it was over the top enough to hear Mom saying "it's only a movie".