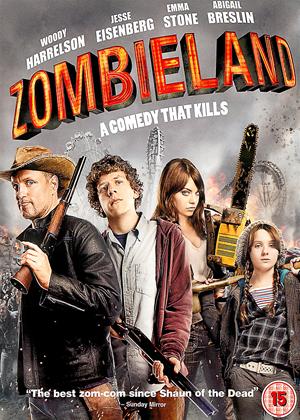 This should not be classed as a horror film. Instead it is a poor attempt of comedy with a few zombies in. If you want something lighthearted then this is for you, but as a horror fan, this was not enjoyed by me.

Truly dreadful, weak, unfunny US 'comedy' horror. Mad Cow Disease mutates and turns happy hamburger-eating Americans into rage filled zombies. Nerdy virgin student (Jesse Eisenberg) wanders the zombie-infested land with a set of silly rules to avoid falling foul of unexpected zombies, meets up with gun toting older man (Woody Harrelson) in search of a Twinkie, and a pair of gun-toting sisters. [Aside: As a non-American I had to look up what a Twinkie is. Apparently a Hostess Twinkie is made up of soft, yellow sponge cake with a creamy white filling inside. Yuk.] The ill-matched foursome have assorted silly adventures, splattering assorted zombies in the process, and meet up with a very unfunny Bill Murray. And after yet more silly adventures in a zombie-infested funfair they go off happily together into the zombie-infested land. This is a deeply unfunny film. Perhaps USAnian 'humor' isn't my thing, but my face never cracked into a grin for the whole boring 84 minutes. In fact that's the best thing about it - it's mercifully short. Oh yes: never mind the lack of humour, there's no horror here either. 2/5 stars - but only because I really have seen worse.

There Will Be Blood - Zombieland review by CP Customer

Zombieland is the American equivalent of our own brilliant Hot Fuzz and Shawn of the Dead. Everyone goes on about the cameo, which is a highlight but it comes as the film begins to lose its way. An uneven pace and tiresome voiceover are two major issues with this film but the sheer fun of it will go down well with the rental crowd.