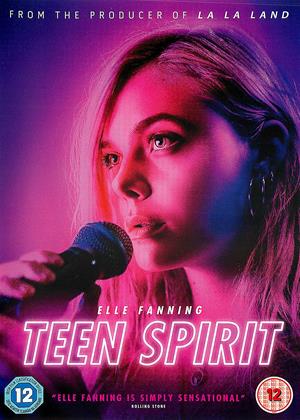 I wanted to like this film. However, I have seen much better parodies of TV talent shows than this (the best being Spanish movie REALITY and UK novel RASMUS). This is just silly - I didn't believe in it.

For some reason the heroine lives in a massive house owned by her supposedly poverty-stricken mother too, something often see in the past and in UK movies now (in Paddington the film the family live in a house worth at least £3 million; in the books it's a modest suburban semi).

I suspect the Polish family aspect and the Croatian has-been opera singer manager were tacked on to tick the diversity boxes, make it all somehow timely and relevant, maybe to even make a political point about how wonderful immigration is BUT this film does not seem state-funded by the BBC, FilmFour, the BFI which all worship diversity, so why bother. The director is the son of famous, rich, Oscar-winning director Anthony Minghella so I am guessing that, like Sophia Coppola, he didn't have to struggle to get into the movie business either.

It is a deeply old-fashioned 'meh' movie much better suited to being a TV drama, frankly, and becomes more annoying as it goes on.

Kids may like it more, maybe. But just maybe.

The phenomenally gifted Elle Fanning takes the lead in this straight-forward but convincing tale of a Isle of Wight-based Polish immigrant's rise to fame on a pop idol TV. She is befriended by a faded Croatian Opera Singer who becomes her protector through the maze of smarmy talent scouts / PR people. It's was predictable stuff but well made, well-acted and a superior teen movie. Recommended if you are looking for a short and unchallenging watch. It really achieves what it sets out to do.

Well above average for this kind of rags to riches teen idol flick...

Watching Teen Spirit is a strangely meta experience considering how much of a crossover it feels for its reality competition story. Elle Fanning plays a poor girl hoping to take her stellar voice from the desolate bar she works at to the big time for a record contract. She’s also playing herself to showcase how well she can sing and hold a musical. For a film where she is expected to be down on her luck, unsure of herself, bitter, and brash enough to struggle with her future, she succeeds enough in fairly standard rags to riches story.

This is a format so familiar it honestly wouldn’t surprise me if an early draft of the picture was to be called A Neon Star is Born. Fanning’s role of Violet is given plenty of room for her to develop and breathe like someone who could really use a break. She works at a bar and is rather shy around both the customers and employees. Her family has fallen on hard times that they have resorted to selling her horse. Life is dirty and depressing in this small village.

But then Violet makes an unlikely ally in the form of the kindly old Vlad, played by a bearded and gentle Zlatko Buric. He initially comes off like a creep the way he watches her open-mic performance closely and then offers her a ride home. One could understand why Violet would be so hesitant to accept a ride from him. They meet again later and he reveals himself to have been a former opera singer that could help her become a better talent. When a talent show comes around for televised singing competition, she just may have what it takes if she heeds the teachings of Vlad.

From there, the film proceeds down a fairly predictable path of hills and valleys for one woman’s Cinderella story of becoming a singer. Violet will train for the competition, fail but then not fail through a technicality. She makes it big enough to head to the city for the competition and has a little bit too fun the night before, pushing Vlad away as she thinks she doesn’t need him. All of this leads up to the big showcase of Fanning flaunting her voice in a dazzling stage performance just sizzling enough for her acting reel.

What saves the film from becoming totally forgettable is its surprisingly docile tone. This is the type of picture that could’ve easily gone for the milkiest of melodrama, where Violet explodes in frustrating anger while Vlad grows irritated with youth. But the characters always feel held back just enough to show more genuine affection. I enjoyed watching Fanning more as a puzzle that doesn’t beg to be solved, even though we can see all the road signs of where this character is headed. Buric also turns in a surprisingly concerned performance that never feels too domineering or misguided as he tries to push Violet in the right direction. This structure gives more contemplation, even if it doesn’t amount to a whole lot.

The best thing that can be said for Teen Spirit is that it reveals how well Fanning can sing in a somewhat cautious display of her talents. She succeeds and is certainly worthy of winning the competition. Great; cast her in a musical already. She and Buric are far too good for such a standard singer picture, even with the 1980s qualities to the soundtrack and vibe which hardly at much.