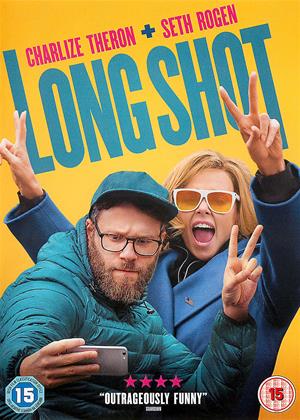 Disappointed - good story, could have been so much better. Why do so many films, featuring "smart" people, have such a limited vocabulary (lazy writing with overuse of the f-word for "comedy")?

Whether you like this film or not probably depends on your age. I am no prude, but find the adolescent humour and sex gags just unfunny - no doubt teens shocked at such things for the first time will find them 'cool'. No need for it though - take that stuff out, cut half an hour off this 2 hour movie, and you'd have a better film.

A basic plot, fish out of water type thing, 2 different worlds collide blah blah, love conquers all. Didn't believe it though for a minute, esp the ending - and this supposed journalist's journalism was AWFUL - no way would ANY paper employ someone who just ranted away like that. So couldn't suspend disbelief.

Also, I never think Seth Rogen is really acting, he's just playing himself. All mildly amusing; I laughed out loud once. Some nice silly visuals and costumes. I liked the Republican/racism routine at the end.

I dislike Charlize Theron as an actress not to mention her recent decision to bring her 8 year old son up a girl because he said he wanted to be one (if he'd said he was a dog would you have put a lead on him and taken him down the park to chase squirrels?)

Anyway, I dislike the pc virtue-signalling going on. We GET that lots in Hollywood hate Trump - but that sort of political stuff just does not work in a movie and shouldn't be there (aimed at any party) - it also dates REALLY badly (cf Monty Python early 70s UK politics references).

Not DREADFUL but nowhere near as good as all the 4 out of 5 star reviews this got from most critics. Maybe their brains have rotted eh watching too much gross-out teen comedy movies?

Crass and Juvenile - Long Shot review by Other Worlds

I can say with some certainty that the people making the movie had an awful lot more fun than I had watching it , I kept waiting for the humour to kick in and then found my attention drifting and then the credits started. If that sounds like a fun way to spend the evening I can thoroughly recommend the movie if not then 'move-on' nothing to see here.

Not a fan of Seth Rogen but I like Charlize Theron so I added this onto my list and forgot all about it, but it turned up! At first, I thought I'd let myself down but seeing as it got selected I'd give it a spin. Eventhough its miles away from the type of comedy I like, I generally like these kind of comedies before they begin to wrap up the plot and the jokes runs out. That said, the first 15 mins of this is p*ss poor and unfunny, but then it begins to gain traction. Much is down to Charlize, as she gives the film its heart and centre. She kept me watching, yet there were some good throwaway jokes but how on Earth this ended up being over 2 hours long is anybody's guess. It was good for one watch and instantly disposable. It's arrival has made me scour my list to delete anyother oddities I added when I wasn't looking.

Below average but it won't disappoint Seth Rogen fans.

Basically a romcom with two outstanding central performances and a clever parody of the media representation of women in the public eye. Charlize Theron is Charlotte Field, a US senator with her sights on the presidency. By chance she bumps into Fred (Seth Rogen), an idealistic, liberal minded journalist and who, when she was a teenager she used to babysit years before. She hires him to help write her speeches and his old schoolboy crush on her returns and soon romance is kindled. But her political ambition and position and his moral honesty threatens their new relationship and her career. There's plenty of great laughs here and at least one very gross out comedy moment but it all seems to work even though they seem the most unlikely of couples. The support cast are also good and include Bob Odenkirk as the outgoing president, an unrecognisable Andy Serkis as an odious media mogul and Alexander Skarsgård as the Canadian prime minister, a small role but he makes it really memorable. An entertaining comedy that is well worth trying.

Trying to think how this movie was actually released as this was really the 'long shot' in my mind. Script is pretty basic and contains the usual crass American themes of swearing and sex and jokes that just don't hit, Seth Rogan playing the self-deprecating nerd that some how gets into a relationship with someone well above him - ring any bells? (Knocked Up). Lost interest half way through and trying to think if I laughed once.

Really looked forward to this film, premise is not seen before, but just plain silly. To many cringe moment and far too long. Found myself zipping through the film as had a lot better things to do. Such a shame. Having said all that, don't often see Charlize smile and laugh in a film, so that was a novelty.

There's not really much of a storyline and the dialogue isn't funny although it would like you to think how smart the writers are. So no story to hold your attention, dripping with adolescent , low intelligence, unsophisticated humour, where can it go from there? The answer is nowhere. Charlize Theron be ashamed of your self for associating yourself with this really poor cinematic effort. It's rubbish!

Hilariously funny from start to finish. An easy watch comedy that had us laughing a lot. A great film if you want something you can follow and laugh at without thinking about it too much.

Long Shot would seem like it could be a bold political statement of a picture in its satirization of the political system and the media coverage. But, much like other Seth Rogen produced comedies that touch on relevant topics, the film merely dances around its subject to provide more questioning than commentary. This usually rubs me the wrong way because in its place is usually a pretty vapid comedy born from the Rogen school of dude-profanity. Thankfully, Long Shot presents itself mostly as a romantic comedy that is surprisingly sweet and sincere.

Rogen is in his element as Fred, a reactionary leftist reporter willing to do anything to get the biggest scoop and make his morality clear. He’ll venture into Nazi dens undercover and go far as to quit his job when his publisher is bought by a right-wing conglomerate. In need of a job, he finds himself in the ideal position of being approached to be a speechwriter for Secretary of State, Charlotte (Charlize Theron). He’s known her from childhood after they shared an awkward kiss when she was his babysitter but she doesn’t remember him at first. They catch up and hit it off well, especially when doing so at a dinner party with musical guest Boyz II Men, who just happen to be their favorite.

The two are perfect for each other because it seems the whole world is against them. Charlotte’s informers believe associating with Fred is a bad idea not just for favoring a journalist with heavy political thoughts but because he dresses like the neon-1990s never died. They see him as a danger to her inevitable campaign for the Presidency and they’re not too far off in terms of media perceptions. Similarly, Charlotte is not as well regarded as a political figure. Her current project is an environmental deal she wants to get the rest of the world behind but is finding herself constantly stripping down the details until so little can be done for the environment. Both of them will bicker and slowly have their judgment clouded in their ideas for their end-goals but they love each other so much that they’re willing to make some big sacrifices.

While Rogen and Theron bring all of the tenderness in their cute scenes of pop culture gushing and political back-and-forth, the supporting cast pulls in beautifully as the comedy underdogs. O’Shea Jackson Jr. plays Fred’s best friend of a powerful boss that pushes, nay, shoves him into love with an inspiring and bold nature, making great snarky comments along the way. Bob Odenkirk plays the President of the United States who is so disengaged with his policies he views this position as little more than a springboard to get into movies. Andy Serkis does an exceptional job oozing into the role of a right-wing media mogul that makes an obvious slimy take on Rupert Murdoch and his Fox News machine. Even the Fox News satire is right on point with a Fox & Friends parody of two men making sexist and racist remarks, the female anchor sitting between them looking very uncomfortable behind her grin.

Yes, in case it wasn’t clear, Long Shot wears its politics on its sleeve but only to the same loose degree that Rogen’s comedies all tap-dance around. The sentiment of the film is still relatable and charming considering it embraces the belief that truth may damage but still set you free. True, by the third act, the film does kind of spin this mantra into a bit of a fable but by this point in the film it's more about the romance than any forwarding of current event politics. And for that, Long Shot is exceptionally cute and lovable, even for a film with loads of profanity and another load in a gross-out moment.