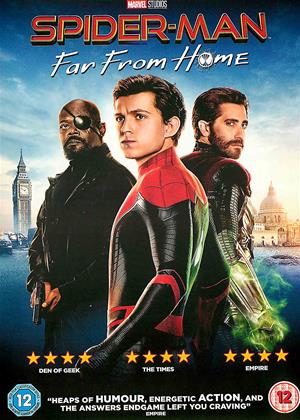 Reviews (7) of Spider-Man: Far from Home

Awful, probably the worst Spiderman film made to date! - Spider-Man: Far from Home review by CS

This has got to be probably the worse Spiderman Film ever made, but in reality it's not a Spiderman film at all, just another in the Avenger series with Nick Fury! The storyline is really silly, full of holes and has very little continuity. Moving on from the end of the last Avengers movie, Endgame, this simply throws at us a preposterous and pathetic theory of what happened that does not make any sense at all. Then gives us what in essence is yet another re-hash of other movies. It's quite clear that Marvel appear to be concentrating so much on merchandising, that they've forgotten how to make decent films! They need to stop throwing lots of characters from different time lines and worlds together and go back to basics again, concentrate on one superhero and the time to give us a decent story, with some new and original ideas, instead of just mashing it all up and being lazy! All the PC boxes are noticeably and blatantly happily ticked, Muslim Girl, Black, Indian-Middle Eastern, East Asian, Jewish, Fat Cheery Guy, etc, ensuring no-one complaints that the film wasn't inclusive and allowing it to be shown in various world territories! And that's another thing, many film makers today seem to be so bent upon not upsetting certain markets, such as the Middle East or China, that any gritty or controversial elements are taken out or subdued, and this completely destroys any sense of gravitas that the film may have had. For me this film was really boring to watch, unoriginal, badly scripted, badly directed, the camera was all over the place, way too much CGI and I'm not sure there was much acting in it either!

Set amongst the beauty spots of Europe (Venice, the Alps, etc), this fairly zips along without the usual Marvel baggage. The up-to-the-minute plot revolves around deepfake technology and gives rise to some imaginative surreal sequences, making even the cgi battles against monsters less boring than normal.

It works even better as a superior high-school comedy as Peter Parker (Spider-teen) and his classmates go on a European school trip. JB Smoove (Larry David’s house guest in Curb Your Enthusiasm) is a riot as their teacher. Instead of yawnfest superhero angst and soul-searching we get fun set-pieces and punchy dialogue. Sample: when Peter tells the girl he fancies that she’s pretty, she replies haughtily “And therefore I have value?”. Marvel nerds may be disappointed, but for those who find most superhero films a waste of screen time, this one’s impossible not to like.

Dreadful - Spider-Man: Far from Home review by RE

The worst Spiderman film to date. Really bad. Story line was thin, characters really poor. Cheezy American schmalz. Only gets one star because the effects were so good

I have to once again reiterate that I am not a big fan of superhero movies and comics. So I do not have a huge stake in any of the MU movies. Having said all of this I do enjoy the Spider-man franchise more than most and in particular, Tom Holland who has seemed to encapsulate the character of Peter Parker perfectly.

Everything in the Marvel movie world is here. A big baddy, whose reaction to his situation seems to have been slightly over-the-top in my view but I suppose super-hero stories are always over-the-top so I’m being churlish. Huge confusing battles and explosions and comic relief from best friends and Happy Hogan.

The story takes you a direction you are expecting and at least drags into a different direction which is definitely to the writers’ credit. I did feel the big-bad was generic and the reaction that made him a ‘big-bad’ was shall we say, a bit of an over-reaction? Jake Gyllenhaal, always reliable, arrives as a competing and competent super-hero that seems to threaten Peter Parker's superhero credentials.

All the actors do their superhero bits well, some could probably do this in their sleep but for me, this is just another superhero film amongst many, I was not following it so intently so I did not notice and clues to further stories (apparently this happens) and I could not help feeling that despite a nice trip around the landmarks of Europe there did not seem to be any reason for Peter to got Europe.

Spider-man is a good comic-book super-hero, he is fun, interesting and more importantly flawed (and I very much like his aunt) but even this film was stretching my benevolence towards this particular hero.

I fell comic-book and super-hero movie fans will love this next instalment whereas others in the same mould as me (is there anyone like me) will be a bit bewildered by moderately entertained.

I still get bored by the huge noisy explosive action scenes and surely I am meant to get excited. I find it very odd.

So this is a slow burner of a movie that's definitely for a younger market. For those who appreciate "diversity" over tradition.

Pros - Tom Holland is a good Spiderman. The humour is good in places, it will make you chuckle now and then.

Cons - Some of the green screen scenes and CGI are just awful. It's a soft Spiderman, designed for the young teen market. Your left feeling unsatisfied when you realise there's no real baddie it's just a normal man using tech (hopefully if not given it away!).

Worth a watch but if you're a hardcore Spiderman fan you will be disappointed.

OK but lightweight - Spider-Man: Far from Home review by HM

This movie shapes up as a teenage comedy for a while then gets into a bit of plot which isn't a bad effort by superhero standards. However, the plot is reminiscent of Iron Man 3 whereby the Mandarin isn't what he seems. There are only so many story lines I suppose. Once the action is underway it is captivating enough, you know; boom, bang, girlfriend in danger, big finale. Am rather bored with superhero movies and this one didn't put me in a much different mood. Entertaining enough though.

No fan of spiderman - Spider-Man: Far from Home review by DJ

How do you follow up a film such as Avengers: Endgame? The epic superhero ensemble picture brought to a close an arc that had brewing over the course of a decade which reshaped the entire world of the Marvel Cinematic Universe. Spider-Man: Far From Home may seem like an odd choice to be the next film following and the final entry of Marvel’s Phase 3, considering the Spider-Man outings have been somewhat lighter adventures. But this plucky superhero is more than up to the challenge.

Peter Parker (Tom Holland) tries to return to life as usual, even after being snapped out of existence for five years. This means that while his non-snapped friends have already graduated, Peter and his teenage friends still have to finish their studies. Once again, they’re off on another science field trip to Europe that may or may not have anything to do with science. It doesn’t matter to Peter considering this could be his big chance to form a relationship with the snarky MJ (Zendaya) and/or chum it up with his geeky friend Ned (Jacob Batalon). Even with the constant questioning of superheroes and the effects of the snap, everything seems to go back to the way it was with the teen comedy aspect of Spider-Man’s life once more present from Spider-Man: Homecoming.

Also back in full swing is the superhero aspect as Nick Fury (Samuel L. Jackson) follows Peter to Europe with another superhero mission. It seems like business as usual, considering Peter will have to combat a series of monsters known as The Elementals with the help of the magic superhero Mysterio (Jake Gyllenhaal) from another dimension. It sounds fairly typical and for a character such as Spider-Man, it seems like just another job. Peter doesn’t think he’s up to the challenge of trying to balance this new hero stuff with Fury while still maintaining a normal high school life, despite Fury’s inspiring words; “Bitch, please, you’ve been to space.”

All of this seems somewhat expected and for the first half of the film, it seems to be headed down a simple path. But then, just when it seems like the film has settled into a groove, a new villain arises and shakes up everything. It’s a new development that takes great advantage of how superheroes have become the norm of this world and how gullible people are willing to believe anything when aliens, robots, wizards, and interdimensional beings are rampant. Listen close and you may just hear some commentary on the nature of superhero films being the only voice in the room that only from within the genre can something big be said.

Of course, all the expected Spider-Man elements are still firing well. Holland and Zendaya have amazing chemistry as the awkward teenage coupling coming together. Gyllenhaal has such a power to explode on the screen. Even the smaller supporting roles such as J.B. Smoove are astoundingly hilarious for the few scenes they occupy. The action is once more fast, clever, and loaded with plenty of sweeping sequences of Spider-Man bounding across cities, slinging web and saving civilians.

Spider-Man: Far From Home is fun, sure, but also a great assurance and excitement for what will follow as we head into the fourth supposed phase of the Marvel Cinematic Universe. It takes many risks with the hero and brings him into his own as the next generation of superheroism that may not be sure of himself, but will do just fine. Plus, the film features perhaps the most shocking and rewarding post-credit Easter eggs of any Marvel movie.