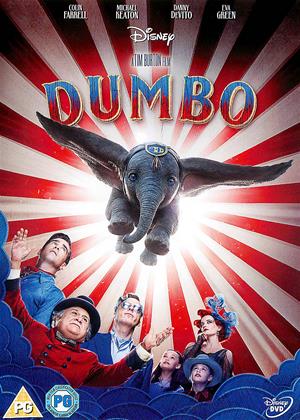 Kids should see the original 1941 as well. - Dumbo review by NC

1941. Not long after Fantasia. Amazing film. Imagination through the roof.......where is the novelty now? Tim Burton has done some pretty original material, but he had a job on his hands here. Has managed to get some of the original on board, like the pink elephants.........how many tens of thousand of hand painted slides to do the original!

Tried to explain to grand children how they made the original animations. They just could not grasp the concept, the enormity of the process!

Liked the film didn’t luv it

Dumbo was cute story was ok but wasn’t gripping

It was a good film

Not a great film

No improvement on the original. - Dumbo review by BE

Run of the mill remake of 1941 Dumbo cartoon.  I found the booming sound throughout irritating and the subdued colours didn't do much to enhance my interest. The two young child leads we're rubbish, especially the girl, displaying stiff and wooden acting throughout the movie.

A Tim Burton Dumbo movie? It sounded strange but the more I thought about it, the more it made sense. He’s a director who deals in films about outsiders, those who are vastly divergent from the societal norm of, well, normality; from Pee-Wee Herman to Ed Wood. So a film about a baby elephant with giant ears that can fly around should be right up his alley of sympathy for the different. Unfortunately, in trying to make such a story work in live-action, the elephant in the film takes a backseat to Burton’s style that puts the baby in the dark and shadowy corner.

The decision was made that Dumbo, much like the animated Disney classic, will not talk nor will any of the animals. And since Disney films for the family don’t quite have the commitment for a silent picture, there must be some talking characters to drive home the message of family and embracing individuality. Enter the circus-working family of the Farrier, facing a similar situation of missing family members and disability. Colin Farrell plays Holt Farrier, returning home from World War I with only one arm. His children, Milly and Joe, have been taken in by the kindly circus where Holt once worked. And though the circus manager of Max Medici is a cranky and reactionary man, expertly played by Danny DeVito, he has enough of a heart to take Holt back into his show as a horse rider.

Also evident of Max’s heart is his taking in of a pregnant elephant. Even when he discovers that the baby elephant, Dumbo, has oversized ears, he tries to find a use for the unfortunate animal. But Milly and Joe soon discover that Dumbo is no mere elephant but one that can fly around the ring. Such an act quickly becomes the showcase of the circus and rightly so. But why doesn’t Dumbo feel like the star of his own movie?

As previously mentioned, there’s a host of human characters to deliver the less subtle messages of the film and they nearly leave Dumbo in the dust. Holt’s dilemma about trying to raise his kids on his own and still be a circus performer is a big enough story in itself. There’s also a subplot about Milly wanting to be more into science than the circus, recovering a bit better in Disney’s stumbling of trying to promote clever and inspirational girl characters. DeVito naturally dominates the screen with his frustrated ramblings and swindling nature. And then there’s Michael Keaton as the film’s rich villain with a futuristic theme park that aims to put this movie between two pieces of bread and shove it all into his mouth. Keaton has always been great at playing maniacal villains but this time he overflows with insanity in a role where I wasn’t too sure if he was going for an accent in his let’s-get-nuts mannerisms.

Where the shines particularly well is in its presentation. Burton’s production design, especially in the film’s final act of a theme park set aflame, is still stunning and striking as it ever was. When Dumbo soars around the ring, yes, there’s a whimsical Danny Elfman score but it still feels magical and wondrous. I just wish I could say the same for the characters who get lost in the shuffle. I can’t help but feel most kids won’t look at Eva Green’s character of a trapeze artist as a woman reformed by wonder but more so the beautiful and lucky lady who gets to ride Dumbo around the big top. And while certain sequences in the towering theme park have that Burton flair, some feel more inline with Burton’s fantasy than what suits Dumbo. There’s clearly more heart and soul put into a spooky attraction of dangerous animals seen in smoke and shadows than the Baby Mine moment that was far more touching in the original.

While I commend Burton for giving this Disney live-action rehash a bit of his own style, I wish there was more faith for the director to maybe take the film in a much more original direction. The presentation of familiar scenes, as well as a very distracting cameo for a ringmaster, always kept taking me out of the film. We care far more for the Farrier family and their escape from an evil mogul than we do if Dumbo will ever see his mother again. As with the scene where seeing a wrinkly Dumbo in clown makeup showcasing him akin more to Heath Ledger’s Joker, some stories are just better suited for animation. And Disney’s live-action adaptations of their animated classics, for as pleasing as this one managed to be, still can’t shake the comparisons.