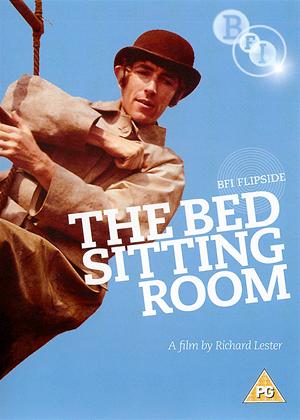 Reviews (2) of The Bed Sitting Room

The background to this film needs a bit of explaining. It started out as a stage play co-written by Spike Milligan and John Antrobus, a strange man whose career mostly consisted of somehow persuading comedians you've actually heard of to co-write really weird comedy scripts with him. Judging by his solo work, those other guys wrote all the jokes. If you've read the play, which was published as a rather thin paperback, you'll know it's about as funny as the proverbial sick baby (and does in fact include jokes involving a sick baby), yet it was a huge hit that ran for years. Why? Because Spike Milligan, who could seldom be bothered to learn his lines anyway, used it as a context in which to improvise, and most nights he was hilarious.

So how do you film something like that, other than by pointing a camera at Spike Milligan and hoping he's on a roll tonight? Richard Lester, who in better times worked with everyone from the Beatles to Superman, solved the problem by leaving Spike out almost entirely; he doesn't play the central character he wrote for himself, and has very little to say or do. Instead, a galaxy of sixties British comedy talent learned lines that were supposed to be the backdrop to somebody who's barely in the film making genuinely funny stuff up, and brought them front and centre, including the jokes about a sick baby. Even more bizarrely, the "vividly realised post-apocalyptic London" mentioned in the blurb, which presumably quotes the back of the DVD case rather than describing the actual film, is in all but a very few scenes represented by a bleak, featureless quarry. They might as well have simply left the camera running in front of the stage play.

There's so much talent involved that it can't help having some inspired moments, though Pete & Dud are almost as irrelevant as Spike, and give the impression that they know it's not working but are willing to go through the motions for long enough to collect that nice fat cheque. But these genuine laughs, and the handful of scenes where we find ourselves in territory that's basically Mad Max with jokes instead of bullets, only serve to remind us how misconceived the whole thing is. "Delicatessen" is a superb black comedy in which people in denial attempt to carry on as normal after the apocalypse. If this film had been less reverential of its source material and done something along those lines, its stellar cast might have made it a masterpiece instead of the misfire which, unfortunately, it is.

Richard Lester directed some good films. But I think this isn't one of them. I like gloomy depressing films more than most. But not necessarily ones that feature Pete & Dud, Spike Milligan, Roy Kinnear, Arthur Lowe, Harry Secombe and Jimmy Edwards. It doesn't sap away any hope and optimism left in your tired soul because it's a black comedy about a post nuclear future. It kills your spirit because it is so badly written, unfunny and pointless.