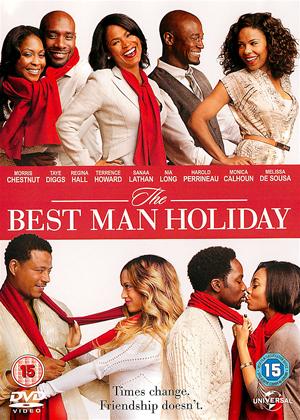 Reviews (1) of The Best Man Holiday

It's a nice easy watch with one of my favourite actors Terrence Howard. I know, I know, I know...the dude likes to act stereotypes in these movies, but I love him and some. Morris Chestnut was looking hot too, so was Eddie Cibrian. Then I kept thinking Harold Perrineau was Chris Rock but then this movie is too low budget for Chris Rock until I found it was Harold Perrineau. Couldn't say much for Taye Diggs - he's a bit creepy so whatever.

Okay the story is pretty much about reconciliation, forgiveness and life and death. Its sad in some parts. Very sad. Monica Calhoun gives a stellar performance and so does Melissa De Sousa, who had great comic timing. Nia Long was cool.

It’s odd to make a sequel to a film after over a decade. People thought it odd that Before Sunset emerged nine years after its predecessor but somehow it worked better than the hopelessly optimistic Sunrise. The Best Man Holiday, a follow up to the 90s film The Best Man takes the same approach as Sunset as it creates real problems and issues to deal with while these friends try to help each other through.

The film follows Mia (Monica Calhoun) and Lance (Morris Chestnut) as they invite their old friends up for the holidays to celebrate Christmas together. Their friends arrive but old issues and feuds get in the way of the celebration as everything from illness to infidelity cause problems with their get together. As everyone tries to get along the gang contemplates whether or not they should be friends in the first place.

The film deals in weighty topics and never treats the viewer like an idiot. While its predecessor was more of a straight romance, The Best Man Holiday uses its already established characters to play with the dynamics a bit more. The films close is powerful and real and not for a second would you see it in a conventional romantic comedy. While The Best Man was an interesting picture, its follow up is a cut above the rest.

Each and every performer puts their all into this smartly written picture with Terrence Howard and Chestnut impressing most. However the film isn’t a sequel that requires homework, you won’t need to watch the last to understand the people presented to you, in fact it might just work better having not. Part of the interest of the film is figuring your way through complex arguments and discussions to find which side you land on. Most of all the characters in the film feel like people and in the end thats exactly what you want from a film like The Best Man Holiday.