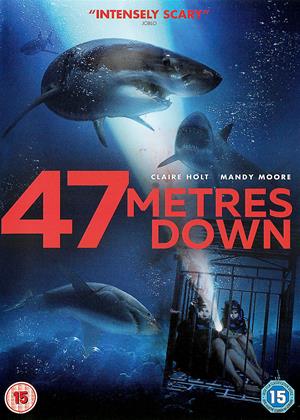 Not Jaws but not bad! - 47 Meters Down review by TB

This is no ‘Jaws’ movie but to be fair it does everything a shark movie needs to do in keeping you gripped with suspense as to what’s going to happen and where the sharks are. Keeps you on edge throughout and the sharks are realistic in appearance. Certainly better than I was expecting!

Sinks To The Bottom - 47 Meters Down review by SH

The premise is quite good, but from the start you get annoyed that the assumption that anything in Mexico will be dodgy, then the predicament begins, and aside from a few moments of tension it is ruined by the repeated drawn out "skin of their teeth" set pieces. By that time the film has sunk without trace.

The film lacks a true spark, but it has enough thrills and spills to keep you watching. I like some of the determination and ingenuity from the girls - but you have to wonder why they ever wanted to go on the boat in the first place, let alone in a rusty shark cage!

This film is boring - which is quite an achievement if you're making a movie about people getting attacked by great white sharks! If you want a modern low budget movie with a woman and sharks, watch THE SHALLOWS which is a decent shark movie. This isn't.

Why? Well the focus on 2 sisters - maybe a nod to femi-film-making - just does not work, because instead of caring for these characters, you (or I) thought how dizzy they were to agree to go in a rusty cage into shark-infested waters.

I enjoyed EVERY entry in the Sharknado series more AND took them more seriously AND cared for the characters more.

A couple of people are trapped on the ocean floor and harassed by sharks. It's a pretty good, tense film. The motivation of the sharks is never made clear, but it's the sort of film that doesn't feel the need to spell everything out, which makes a refreshing change. Matthew Modine is in this for some reason.

Dont get bullied into do anything you dont fancy...Ever! - 47 Meters Down review by porky

Basic Story but it is entertaining enough to keep you watching .

Will they ,wont they get eaten ? Survive ? Reach the surface ? etc...

Worth Watching .Better than Expected ,But it really isn't Jaws.

You don't really care who lives or dies and the Sharks are just Swim By Fish ,not Characters in the story.

Unlike the actors don't hold your breath expecting this to be a good movie as it isn't. They chat so much under the water that its a surprise they didn't use up all their air in about 5 minutes .Avoid.