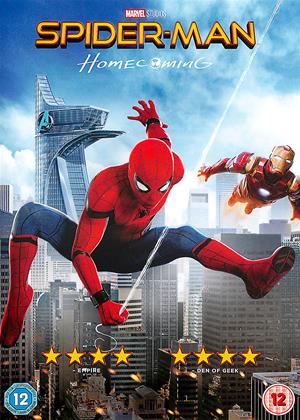 Yet another boring Marvel Hash milking the Stark Universe for yet more money! - Spider-Man: Homecoming review by CS

This has got to be one of the worst and most boring films of the year to date! The problem with the Superhero genre now, is that it's all been done before and so much better. Each Superhero had their own storyline, their own cast, their own timeline and their own city to live in, enabling them to really get their teeth into character development and storylines. Nowadays everyone seems to be a part of the Stark Universe, mixing characters, themes, timelines and super powers, so much so that it's all become all a bit of a mash and there's no space left to develop any sense of character, personality or emotion! The story here is so basic and unimaginative, the editing is awful, all over the place and really choppy in parts, the direction is very poor and there's very little character development. All the same old Spiderman themes are constantly re-run, there's nothing new here in the storyline, Spiderman's not moved on, he's literally stuck in the same repeat. This may appeal to a new younger generation, but for anyone who is familiar with all the other Spiderman movies from the last two decades, this is yet more of the same, done very badly! And of course we have the inevitable connection with Tony Stark and his Avengers enterprise, which whilst completely spoiling the film, also conveniently leaves the ending open for the next in the series! I long for the days when these films actually had a decent plot, the actors could actually act, there was a sense of excitement, emotion and action, fantasy was actually believable and you could empathise with the characters. there's little of this in this film, or any of the more recent Superhero films! It just comes across as being all about the money, marketing and the next sequel in the series, instead of making a decent film that can stand alone or above it's competitors! I wasn't impressed by the last two which were completely emotionless and this new version is just as souls in my opinion, one for the bargain bin me thinks!

Terribly Childish MARVEL offering. Unlike previous Avengers Movies,this one seems made for the Children's market. Occasional appearances of Iron Man help make you remember what it is you are watching but even that seems Tagged On to connect it to the Avengers Marvel Franchise and sits awkwardly in the story. CGI is of Low Quality so Spiderman in action really looks much like the Cartoon version from the 70's .and the Joke fat Friend is Soo Comedy it was like watching Mr Bean....What were they thinking ???

Shame because up till this entry ,i've really enjoyed the Marvel Avengers Franchise .might think twice about following any more in future .

If you're looking to watch a Spiderman film this is NOT it. Since when has Spiderman been an Ironman hybrid in an all singing and dancing suit - pure rubbish. STAN LEE you should be ashamed of youself selling out like this.

So many Marvel comic films. Now they have all the individual characters doing swop-meet with each other.

Mike Keaton a few years from his own Batman, but likes a good laugh, so lifts a pretty ordinary film up a tad.

Yet another Spiderman reboot - Spider-Man: Homecoming review by AL

Perhaps I'm too old, but in my head the Original Toby McGuire films (I'm not counting the third one) were great and recent. Since then it's already been rebooted not that long ago and here we go again. A different setting, girlfriend and baddy (Michael Keaton is excellent as always), but really didn't grip me at all. Marvel seemed to have got their fingers fully into it, Stark and so on. Can't totally put a finger on it, but just didn't do it for me.

A perfectly OK Marvel outing, that manages not to re-tread the 'Uncle Ben' beginnings of Spidey once again.

It also manages the rare feat of a villain, played ably by Michael Keaton, that isn't a two-dimensional thug whom likes killing things. It is however a pity that isn't expounded upon properly until a post-credits scene.

Otherwise young Holland does a reasonable enough job, and the film is quite funny at times, but the whole concept of him needing to learn "it's not about the suit" is a bit flimsy and obvious.

No better than the other Spider-Man movies, and certainly worse than some of them. He really should not have bothered coming home.

Great if you're under 15 yrs old, otherwise don't bother. This film is no better than previous Spidey's

Not the best Marvel or Spiderman by far. - Spider-Man: Homecoming review by AS

Only marginally funny and defintitely aimed at teenagers. Michael Keaton was good though as always but Tom Holland does not have the charisma of Andy Garfield.

A good reworking for the new generation - Spider-Man: Homecoming review by PB

Having grown up with Marvel comics in the 1970's, the original 2002 Sam Raimi Toby Maguire movie was everything I'd hoped for and loved about the characters and will be in my opinion, the truest of the adaptations.

That said, I found the latest offering great fun and an enjoyable re-imagining of the Spider Man franchise. There were bits that I initially thought NO!, like the new talking suit, but then again, why not? It worked well and what I enjoyed was the over enthusiastic naivety of Peter Parker, which I think is a welcome breath of fresh air to the effortless over confident arrogance of the rest of the current Avenger Marvel characters.

So to summarise: Great effects, good acting, ideal for turning off your brain and going along for the ride for an enjoyable couple of hours. Remember though, this is really a kid's film, so don't get too precious about it!

My only one gripe - why did Gwyneth Paltrow get higher billing than Robert Downey Junior in the credits ?!?!??

No longer is Spider-Man a solo Sony superhero as he can now play in the same yard as Captain America and Iron Man. Well, almost. Sure, he made his big debut in Captain America: Civil War, but he’s not quite ready to become a full-time member of the Avengers. After all, this is still a Sony movie and Sony’s last outing with Spider-Man was less than stellar. Consider this his trial run.

The good news is that this iteration passes Marvel’s Cinematic Universe standards. This Peter Parker, played by a wide-eyed Tom Holland, has a more chipper and lovable personality, if not a little overly-geeky about working with his heroes. You can’t help but smile at his hyperactive excitement for making a video diary of his Civil War participation like a kid vlogging his first trip to Disney World. Thankfully, he has enough character to bring back down to Earth before his Marvel-gushing launches him to Deadpool levels of insanity.

Parker has a very active high school life with friends, a crush, a bully, a club and parties. His high school time never feels like a day job meant to occupy his time between crime fighting. His equally nerdy friend Ned makes the day more fun with the prospect of building a Death Star with Legos in the evening. His secret love for MJ makes him a little more driven to attend academic decathalon team. Being bullied by Flash Thompson pushes him to define himself a little more.

But once the final bell rings, he slips on the suit and makes his rounds of New York City streets. For being so young, Spider-Man is still wet behind the ears when it comes to being a hero. Despite being well known as the friendly neighborhood superhero who stops bike thieves and car-jackers, he still makes a few missteps that can result in misunderstandings and damages. Tony Stark, reprised by Robert Downey Jr., is aware this kid is not quite ready to take on the likes of Ultron or Thanos, leading to him limiting Spider-Man’s role with the superheroes to a status of “don’t call us, we’ll call you.”

With such a distance from the other superheroes, it’s up to Spider-Man to prove himself with the starter mission of foiling the villain of The Vulture. One would think for such an antagonist being portrayed by such a hot talent as Michael Keaton would make this Marvel villain a little more memorable. Unfortunately, he’s the weakest part of the primary cast, unsuccessfully trying to put on a Brooklyn accent. His arc isn’t too interesting as a construction worker turned black market alien arms dealer and the script seems to be aware of this by shying away from most of his story. Why bother explaining why he builds a bulky mechanical flying suit for stealth missions of swiping alien tech from the government? We know it’s an excuse to showcase a costume for The Vulture and probably don’t care for the reasoning.

There are so many fun and witty lines written into this script, most of which take place at the high school, that it’s a shame the action scene aren’t as inspired. The movie’s most elaborate stunt of Spider-Man preventing a ferry from splitting in two bears a striking similarity to the train sequence in Raimi’s Spider-Man 2. The fight scenes between The Vulture and Spider-Man are assembled with so much obvious computer graphics it may as well be a cartoon. And while Spider-Man eccentricities for being youngest hero on the scene, it reaches a point where I wished the titular hero would add something big to this Marvel universe rather than gush all about it.

For those who just want a decent version of Spider-Man to play nice with other Marvel characters, Homecoming does deliver on what you’d expect. Those seeking a plucky and likable Peter Parker, far distant from Andrew Garfield’s more inconsistent take, will be satisfied. Those who just want another solid Marvel movie with a handful of big laughs will not be disappointed. And for as much as I enjoyed the playful and light aspect of this movie, I couldn’t help but feel that there should have been something more than just the usual Marvel makeover. Something to ponder after laughing at a gaggle of high school girls having a game of “F, Marry, Kill” on the Avengers.