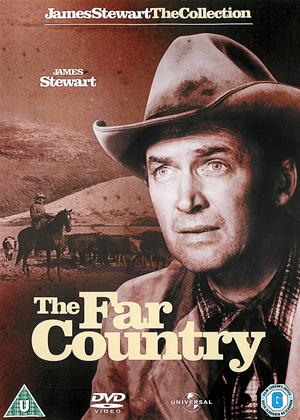 Reviews (1) of The Far Country

Anthony Mann's westerns starring James Stewart have such a high reputation as classics that they're almost beyond criticism, but the fact is, they're not all equally good. In this very slow and mostly actionless movie, James Stewart's selfish, unlikeable anti-hero spends the entire film being gradually persuaded to care about other people by assorted overwritten stereotypes we're supposed to find wacky and lovable, including Walter Brennan, who must have been the allegedly funny but actually rather annoying sidekick in ten times as many westerns as any other one-note character actor. And even that relentless barrage of quirky niceness would have failed if, just as our thoroughly disinterested hero was about to ride out of a movie that was almost finished anyway, the bad guys hadn't shot his only friend in the back, giving him a very belated incentive to do what a man's gotta do in the last five minutes.

The inevitable romantic subplot is more complicated than usual, but so peculiar that in the absence of very much proper western action, I kept being distracted by the thought that maybe the entire film was a massive joke in which the cast and crew all knew the main character was gay but they never told the studio bosses. Almost everyone seems to be oddly asexual, apart from the two women who set their sites on James Stewart, both of whom struggle to get his attention because what he really wants to do is ride away from them both and settle down in a cosy little cottage with Walter Brennan - yes, really! By the way, one of those women spends the entire movie dressed as a boy. She's also one of the worst actresses you'll ever see in an A-movie, has a foreign accent that makes Inspector Clouseau sound authentic, and plays her part as if she's slightly retarded. The chemistry between her and James Stewart is so non-existent that they never kiss because it would just look creepy.

The idea of a totally self-centered protagonist who eventually has to admit he's a real hero after all would become a mainstay of spaghetti westerns when they were invented almost a decade later, but in 1954 it was well ahead of its time, and they were still tinkering with it. Here, the balance between the ingredients is badly wrong, and James Stewart frequently seems to be in the wrong movie. And they really could have done with a couple more gunfights. Strangely, the same director and the same star made a very similar film two years earlier called "Bend Of The River", and it worked far better. It looks as though everybody mistakenly thought that the formula would work better still with an even more reluctant borderline amoral hero, and didn't realize that once they'd gone too far over that line, they'd have to invent a whole new genre.