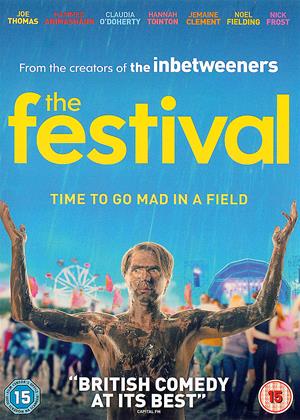 Reviews (5) of The Festival

Sad times we live in when this film is given a wide release and so many wonderful auteurs are struggling for their art. Whoever wrote this needs to be dropped in the pit at download -maybe they will grow a brain there. Perhaps it deserves one star as it is indicative of commercialised festivals? Wouldn't know I'd rather sit in crying and listening to Max Richter obs. Ticket fee better spent at the pub. P.S yes I am a film snob that's why I'm on cinemaparadiso

Dreadful! - The Festival review by TH

Poor script (not sure there is one) - University fall out with girlfriend so Nick (Thomas) goes with friend to a festival who then meets up with old Uni pals and not surprisingly his ex, then drugs, some sex, some fall outs etc.etc. - the jokes fall short and some of the dialogue at the beginning just time filling. Aspects taken from the Inbetweeners (the embarrassing father in law) and Joe Thomas can't escape being Simon and some actors in this have appeared in the fore-mentioned...go into this with low expectations because it really is poor!

Dreadful, unfunny, pc festival movie, strictly for kids with IQs lower than their shoe size - The Festival review by PV

Well The Inbetweeners was funny - the series more than the movie, though that had a chemistry and was funny.

This is not even a Poundland Inbetweeners. It's way worse than that.

I think I laughed once. And I though Joe Thomas (who.s actually over 30) was great in The Inbetweeners. Watch that, NOT this.

Gross-out 'jokes' re poo and bodily fluids are unfunny. Usually childish cartoony capers and laughs about drugs. Even cartoon cops in here.

You sort of know when a drama or movie is desperate when they deliberately try to tick the diversity boxes to pander to pc critics. But the fact is, and I have been to Glasters and Reading, it's a mostly white person thing. Very few black faces, so the sidekick is miscast utterly. Just like in Bohemian Rhapsody when they CGI-ed in 20% black faces in the crowd when in reality at Live Aid 1985 there were practically none.

Avoid unless you are very VERY desperate. BUT far better to watch sets from festivals on YouTube (the Stones and Shirley Bassey at Glasters, for example).

Entertaining enough as an afternoon comedy but nothing more, I liked it but it isn't worth rushing to see anytime soon.

It comes across as if they intended it too be another Inbetweener's Movie but none of the rest of the cast wanted to do it.so they made it as a stand alone Movie 'Festival' instead .

Basically ALL the usual gags you get in any episode of Inbetweener's and Joe Thomas being exactly the same character only with different friends .and a slightly different girlfriend . but only slightly . if you like Inbetweener's then you will enjoy it .but that is all it really offers .

I've never watched the Inbetweeners, but it saddens me often what passes for so called comedy nowadays! A bunch of ex-graduate twenty somethings go to a music festival, camp in a field, get drunk, take drugs and have a lot of sex, so a  highly original script and storyline, not! There was only one scene which made me laugh out loud, and that was right at the beginning when his mum does something she shouldn't have and realises her error too late! What irritated me about this film is I feel that it sends out some very confusing mixed messages about what is and isn't acceptable behaviour, it's ok to break into and vandalise someones car, it's ok to engage in beastiality, it's ok for women to treat men like dirt and sleep around then attempt to blame the man because he's upset by your behaviour! There seemed to be an awful lot of women walking over men and treating them disrespectfully, accusing the man of being selfish when they really do need to take a good long hard look at themselves first! I find all this Feminazism really rather tiring and dull and incredibly hypocritical, but hey ho, that seems to be the new form, PC'ness killing cinema today!