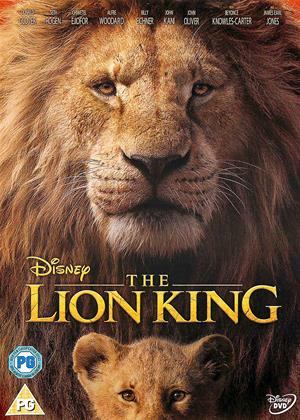 It's not terrible but apart from the ending, which was a little rushed in the original, I can't think of a single thing this film does better. Sure, the visuals are impressive, but the harsh realism overwhelms any sense of drama. The script is unchanged for the most part, which would be fine, except that it makes the relatively weak voice acting of some characters even more prominent. Zazu, in particular, comes across very flat.

Elton gets richer. - The Lion King review by NC

Keeps well to story and graphics are very impressive. They getting them near perfect now. Go see it on stage in London if can, is even better!

Looks lovely but is it needed! - The Lion King review by PC

This is a beautiful film to look at but is there really any point to it, it follows the plot from the original and includes all the same songs. Whereas Beauty & the Beast and Aladdin have mainly human characters this is still basically animation, just an advanced version. Not as bad as Dumbo, but really just watch the original again which has better voice characterisation.

Not as good. - The Lion King review by AH

Great CGI but the music and voices are not as good as the original. Michael Cain once said that " You should only remake a bad film" this film proves the point'

The Lion King (2019) is an almost shot-for-shot remake of the original, but it’s animated in a style that fits the story much, much worse.

OK so I have to admit that The Lion King original was not my favourite Disney cartoon - not in the same league as Dumbo or Sleeping Beauty or Pinnochio for example. Its plot is totally ripped off from HAMLET. But anyway, I did enjoy this film with some reservations. Here are the pros and cons.

1) the bad things: why remake a decent animated feature anyway? Milking it. The animation though is superb - lovely colours and contracts black evil/lighter colourful day. Not sure how much they took from the original and how much they added. One issue then is that this looks SO realistic and yet a) the lions lack any physical sign of maleness under their tails (!) as if they are all sexless, and the naturalism jars then. b) the animals of various species all living together happily is pure nonsense - it works in an animated film BUT when this looks so realistic, it comes over as silly. I also disliked the use of black actors only for play the lions as if that makes it authentic! They are all Brits or Americans anyway. How absurd! Lions are not black people, even if living in Africa! Clownworld 'authentic casting' trend. WHY is Nala sounding like an African American sassy woman as played be Beyonce? Miscast badly. I can think of many white actresses who could have done a MUCH better job. The music by Pharrel Williams is too modern R&B for me, and tbh the Elton John/Tim Rice songs were not all that great in the first place.

2) the goods things: the animation is really classy, detailed and superb. The script and story structure is well done. AND I loved the fact there was violence and death in this story - so many authors of children's books and TV shows get told these days that they are not allowed to show bad things happening or violence or death. So good for the Lion King producers for that. I did enjoy the characters and story, despite its silly 'all animals love each other' shtick. A good evil character in Scar too.

SO all in all, this is Disney milking it as it is all its back catalogue now - so lazy and cynical. On the plus side, I enjoyed a mindless almost 2 hours watching this fairy tale. So 3 stars.

Can You Feel the Love? Again? - The Lion King review by BG

I prefer the original version, but I have to say that I was very impressed with the way they got those animals to act the way they did! It must have been a nightmare training those lions for a start. Usually you get a wildlife photographer on his own for a year, buried in a hide in the middle of nowhere in South America, and all he has to show for it is some footage of a chinchilla having a s**t.

Better graphics but nothing else - The Lion King review by MM

Aside from the CGI rendering, which is so realistic it might as well be a nature documentary, it's difficult to see what this remake adds to the original. Most of the songs are the same, but the changes they have made are certainly not improvements — "Be Prepared" is reduced to about 45 seconds of mostly spoken chanting, to make way for "The Lion Sleeps Tonight" and some shouty auto-tuned rubbish by Beyoncé. Mufasa and Scar have decent voice actors but the rest are pretty mediocre: child Simba is just a generic whiny American kid while adult Simba sounds like a comedy actor who is out of his depth in a serious role. The film is almost a shot-for-shot remake but somehow manages to be 30 minutes longer without actually adding anything of value, which in a way is something of an achievement.

The King Still Rules! - The Lion King review by trbp72

I love the original animated Lion King, it is one of very few movies that resonates with me and really grips my emotions. So I was always a little dubious about this 'Live Action' version...when you take beloved characters and 'update' them for the millenial audience it sometimes never quite works the same as the original...but this...well this is something else!

Everything about this movie whilst pretty faithful to the original (I believe it is almost shot-for-shot directionally speaking), also expands the greatness of the animation by giving such lifelike interpretations of the characters! It was great that James Earl Jones was Mufasa again...it would have been nice to perhaps have had Jonathan Taylor-Thomas as the adult Simba...just for fun...but I get there are newer voices in Hollywood...the soundtrack which is the life and soul of the original is also well preserved...The opening bars to 'Circle Of Life' always bring me to tears (it's my cross to bear!)...and that was the acid test for me...once that happened, I knew this version would be as good as the animated one.

So if you haven't watched this because you are protective of the original and think this will spoil your fond memories...I can guarantee that this version will have you gripped and in tears as much as the original, but you will marvel at the stunning set pieces and execution of the pivotal scenes of this movie! Give it a try! You will like it!

Jon Favreau was able to find plenty of interesting angles to explore in 2016’s live-action remake of The Jungle Book considering it wasn’t exactly Disney’s best animated film. But since the studio has decided to dip into the richer pot of animated classics, they’re now playing with nostalgia that a lot of Disney lovers that grew up with these films have become passionate about. As a result, Favreau’s The Lion King doesn’t really mess with the formula of classic drama and musical numbers that made the 1994 original so prolific. This is both an attribute and a curse.

The story still works but mostly because it’s not changing much of anything. We’re treated to the big opening of the African plains celebrating the birth of the new lion prince Simba with gorgeous computer animation and a booming version of the familiar score with Hans Zimmer. We learn of Simba’s dignified and insightful father Mufasa (James Earl Jones) and his jealous and evil uncle Scar (Chiwetel Ejiofor). Drama for the throne ensues as Scar plots the deaths of Simba and Musfasa. And if you’ve seen the 1994 original, which seems almost like a rite of passage if you were a kid of the 1990s, you pretty much know the rest.

Plot-wise, The Lion King doesn’t add much of anything but that’s okay. Most of the performances are not too shabby. Chiwetel Ejiofor has a more vicious voice where he takes bigger swipes and makes more scathing snarls as opposed to the refinement of Jeremy Irons from the animated original. His version of the song “Be Prepared” has a tad more drive. Most of the cast delivers performances that feel very natural, where it almost seems like some of them may have been goofing off on a sound stage with motion controls to get their mannerisms just right.

The computer-animated environment has its pros and cons. On one level, the total control of a photorealistic environment allows for some profound staging to create a true sense of operatic wonderment. At the same time, many of the characters are portrayed as so accurate to true animals that seeing and hearing them talk is jarring at times, to the point that I almost wished the animators would break the illusion just for a bit to allow for more expression. It’s a mixed bag but ultimately I found myself a bit more entranced by the presentation more than the characters themselves.

When thinking about The Lion King, I found myself drawn back to the 2005 remake of The Producers, a film which is still funny but more or less the same thing as the original, nothing new with the exception of the performances and maybe some better sets and cameras. The Lion King is very much the same way and I can’t get too mad at the picture for doing so. It’s nowhere near the horrendous nature of the live-action Beauty and the Beast update, which unsuccessfully attempted to autotune melodies and add in the magical atlas which created deep plot holes.

If you’ve never seen the Disney classic or just wanna see a prettier update, The Lion King fulfills that level of entertainment. Just don’t expect it to do much else than that, never truly taking full advantage of exploring more of its world and its philosophies.