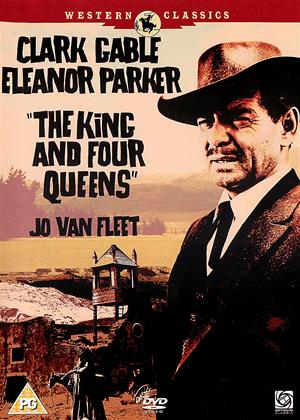 Synopsis:
Clark Gable plays the nomadic Dan Kehoe, wandering adventurer and suave, smooth talking cowboy. He also happens to be a notorious, gun slinging fugitive and a ruthless opportunist. On riding into a decaying ghost town, Dan comes across an isolated ranch occupied by a group of widows whose outlaw husbands were killed during a robbery. Rumour has it that a stash of gold is hidden within the ranch but only one of the women knows where it is. And so begins Dan's game of cat and mouse as he plays each woman against the other, creating a complex web of deceit within the household. With plot twists around every comer and a nail-biting climax...
Actors:
Clark Gable, Eleanor Parker, Jean Willes, Barbara Nichols, Sara Shane, Roy Roberts, Arthur Shields, Jay C. Flippen, Jo Van Fleet, Florenz Ames, Chuck Roberson
Directors:
Raoul Walsh
Producers:
David Hempstead
Writers:
Richard Alan Simmons, Margaret Fitts
Studio:
Optimum
Genres:
Action & Adventure, Classics, Romance

Reviews (1) of The King and Four Queens

When You're Good to Mama... - The King and Four Queens review by CH

One might well imagine that, after the midwife slapped Clark Gable into life, he did not cry but had that twinkle in his eye which he so often did in films where a woman takes his charm amiss - as happens in The King and Four Queens (1956). Directed by Raoul Walsh, this Western sticks to one location, Wagon Mound, a compound near a small, remote town, but it has all the pace for Walsh is renowned, as well as his sense of place and subtle cinematography, here realised in beautifully bright colour, whether this be the landscape or an array of dresses.

Fine dresses - and, indeed, tresses - in such a spot? The script is by Margaret Fitts, from her own story, and a far cry from her lumpen adaptation of John Meade Falkner's Moonfleet the previous year. When fetching up in town (the start of so many a Western and a thriller), Gable heads to a bar and, on emerging, encounters a man who is delivering a gravestone to Wagon Mound. It is the latest one for which a widowed mother has saved up, her funds derived from hens and their fitful laying of eggs.

Ma (Jan Van Fleet) had four sons, three of whom died while stealing $100,000. Another survived, and she lives in hopes of his returning to claim the hidden loot. Also on the premises are the men's four wives/widows, all under the thumb of Jan Van Fleet - her thumb beside the trigger to ward off anybody who comes close to this run-down house, and its tower is home to a warning bell.

In the years since the robbery, the widows, among them Eleanor Parker, have become - how can one put this? - frustrated. Their craving for flesh is only kept in check by the thought that chastity could be rewarded with cash when the survivor returns. When you're good to Mama, Mama's good to you...

An inch the other way, and Gable would not have made it to the front door. As it is, he is patched up, a matter of a bare chest for a while, and even the rifle-packin' Mama is not immune to his blandishments. As moonlight works its wonders, Gable switches from a hymn upon the organ - in an opulently run-down sitting-room - to a hoe-down and, as the sultry turns salty, the air is rife with innuendo which could have sprung from the other side of the Hays Code (I shall not quote any of it - this is all the better in context, and sure to bring a smirk even to the po-faced).

A new angle, perhaps, on something which was called a women's picture. They certainly hold the fort, literally and metaphorically.