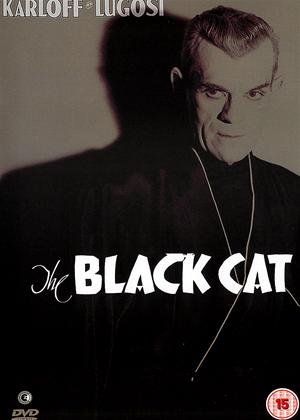 Synopsis:
The first and possibly the greatest pairing of Lugosi and Karloff is one of the darkest, most macabre horrors ever made. Dr. Werdegast (Bela Lugosi), a POW for fifteen years has been freed and now seeks news of his wife and daughter and vengeance on Hjalmar Poelzig, the man whose betrayal lead to his imprisonment and the deaths of thousands of his countrymen during the war. He tracks him down to the castle he has built on the site of their old fortress and soon discovers the diabolical secrets held within its walls. Poelzig is now the leader of a satanic cult, engaging in macabre practises and rituals.
One man's pure evil against the others tormented need for revenge leads to an absorbing battle and a shocking climax.
Actors:
Boris Karloff, Bela Lugosi, David Manners, Julie Bishop, Egon Brecher, Harry Cording, Lucille Lund, Henry Armetta, Albert Conti
Directors:
Edgar G. Ulmer
Writers:
Edgar Allan Poe, Edgar G. Ulmer
Aka:
The Vanishing Body
Studio:
Second Sight Films Ltd.
Genres:
Action & Adventure, Classics, Horror, Romance, Thrillers

Reviews (2) of The Black Cat

Edward G. Ulmer was a decidedly mediocre B-list director who in the course of his long and prolific career made two standout films; "Detour" (1945) and this one. Although they're in different genres, they share a common theme of putting their protagonists in literally nightmarish situations where everyone and everything seems to have it in for them for no reason at all. "The Black Cat" is also notable for its "hero", a thoroughly boring young man the movie is obliged to include but obviously doesn't care about, being almost as helpless as his equally stereotypical damsel-in-distress bride, and when he does take action, either failing to accomplish anything or doing something wrong and useless ("Detour" bases its plot entirely around this idea, which it takes much further).

In actuality, Bela Lugosi's creepy, tormented Dr. Vitus Werdegast is the film's real hero, mainly because Boris Karloff's spectacularly atrocious Hjalmar Poelzig would make anyone in the same room as him who wasn't Adolf Hitler seem quite nice. This film was made in an era when anything really nasty or connected in any way with sex couldn't possibly be shown, merely hinted at. Which is just as well, because if every unpleasant event that happens slightly off-screen or is left entirely to our imagination was shown explicitly, "The Black Cat" would be the first torture porn movie! If Dr. Werdegast's revenge happened on-camera it would be almost unwatchable. As for Poelzig, worshiping Satan is the least of his sins. In addition to being a sadistic serial-killing traitor responsible for tens of thousands of deaths, it's repeatedly implied as heavily as it can be without actually saying so that he's a necrophiliac.

Hjalmar Poelzig is one of the great obscure movie villains, and in the first of their many screen partnerships, Karloff effortlessly steals the show from Lugosi, despite his ludicrous Dracula/Frankenstein combo hairstyle (the original "fright wig"?). If any one-off character deserved a sequel, or indeed a franchise, it was Hjalmar Poelzig, and these days he'd get one, probably in direct competition with the less interesting and much nicer Hannibal Lecter. Or maybe he'd be the Joker's dad? There's a moment when Karloff suddenly looks just like an elderly version of Mr. J...

Like Lugosi's "White Zombie", this is one of the most unfairly neglected horror movies from the early sound era. It doesn't get the recognition it deserves because it doesn't feature a famous monster like Dracula or Frankenstein, but it's as good as all but the very best of the rest, and considerably better than many so-called classics, especially "Dracula". It's by no means perfect. The young couple in peril are a waste of space, the thankfully brief appearance of the comical foreign policemen is simply embarrassing, and the plot doesn't make a lick of sense, though that contributes to the nightmarish atmosphere. But it's packed with bizarre details and outrageous developments, and its brief running-time means it never has a chance to slow down for long enough to drag.

If you're wondering what all this has to do with Edgar Allan Poe, the answer is, nothing whatsoever, apart from a totally irrelevant subplot involving a black cat which was obviously shoehorned in at the last minute to justify the title. It was actually based, very loosely indeed, on the life and legend of Aleister Crowley. And it has no connection either with the 1941 movie "The Black Cat", although Bela Lugosi's in both of them. By the way, old-time horror movie buffs should pay attention to the Luciferian coven scene; the Satanist playing the organ is John Carradine before he was famous.

This is an occult face-off in rural Austro-Hungary between an architect/satanist (Boris Karloff), and a vengeful psychiatrist (Bela Lugosi) who has just been released from 15 years in a Siberian prison after being betrayed by Karloff in WWI, who then married his wife and later his daughter... It is the first pairing of the two great horror stars of the thirties.

The Black Cat is a startlingly deviant film. As well as the then novel theme of satanism, there is an unmissable suggestion of necrophilia. Karloff, inhabits a modernist mansion built on the site of the castle in which he oversaw genocide in the war. He has designed it in an ultra-modern style, most unusual for thirties horror, but in the cellars of the old castle he keeps the bodies of women he has loved, preserved in their youth, including Lugosi's former wife.

The look is striking, both impressionistic, and spacious and modern. The main weakness is the film's funereal pace and the vacuous American honeymooning couple (David Manners and Jacqueline Wells) who happen upon this house of insanity. Wells reminds the two rivals of the woman who married them both, and they play chess for her. Karloff intends to sacrifice his prize in a black mass and add her to his gallery of beautiful corpses.

So who wins the battle of the stars? Both overact splendidly.  Lugosi is a very limited actor but there is a wonderful moment when he delivers some lengthy dialogue in his own language and he suddenly sounds natural. But Karloff with his lisp and his deco-effect makeup is more memorable and a less restricted performer.