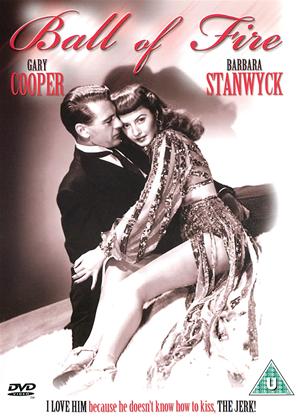 Sign up
Once Upon a Honeymoon / In Name Only

Reviews (2) of Ball of Fire

A civilised joy in these times, Billy Wilder and Charles Brackett's script for Ball of Fire: a reclusive team's encyclopedia work stalls at S, including Gary Cooper's entry on Slang, as he realises after a visit from a Sanitation worker. Words beginning with S echo throughout, often uttered by Stanwyk (Barbara), and there is neat use of lines from Shakespeare's Richard III.

To say nothing of a performance by Gene Krupa and his band. Sensational.

Which suits Ms. O'Shea as she is trying to disappear so she doesn't have to testify against her gangster sugar daddy (Dana Andrews). And so the moll teaches them hep-speak and in turn they expose her to a few of the kinder human values. The film dwells on themes around the letter S, like Saturn, Shakespeare and sex.

The big problem with Ball of Fire is the lack of combustible chemistry between the stars. Cooper is inert and Stanwyck lacks spark. She doesn't have the sass or the glamour to make the comedy come to life. But there is a fine swing number at the start of the film mimed by Stanwyck with Gene Krupa and his orchestra, and the support cast is a superb A-Z of classic Hollywood character actors like Oscar Hamolka, SZ Sakall and Henry Travers.

Screenwriters Wilder and Brackett give us one really great line. As she struggles with her zip, Sugarpuss wisecracks: 'You know, I had this happen one night in the middle of my act. I couldn't get a thing off. Was I embarrassed!' But it isn't their best work, and the film is a touch slow by Hawks' standards. But it's worth seeing for its reputation, its clever concept, the support cast, and what might have been.