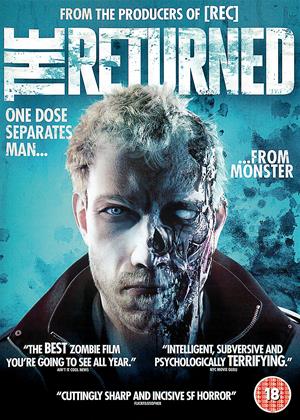 Synopsis:
Kate works at the hospital in the Return Unit, helping those who have been infected by a virus that turns people into zombies, including her husband Alex, by administering crucial doses of Return Protein. The doses keep the virus at bay but much of the public are still fearful of those who have been 'returned'. After various brutal and prolific attacks at the hands of Anti-Retum groups and rumours that stores of the crucial drug are running low, the government request that all Returned report to official medical facilities for their own safety. But Kate and Alex instead decide to flee along with the stash she's been stockpiling.
Though it tuns out the real threat is a lot closer than they think...
Actors:
Emily Hampshire, Kris Holden-Ried, Shawn Doyle, Claudia Bassols, Paulino Nunes, Oluniké Adeliyi, Paul Anthony, Melina Matthews, Barry Flatman, Romy Weltman, Jamie Lyle, Emily Alatalo, Phil Guerrero, Stephen Chambers, Darren Summersby, Garrett Ryan, Brian Christopher, Lewis Hodgson, Jack Sansone, Andy Hull
Directors:
Manuel Carballo
Producers:
George Ayoub, Julio Fernández, Gary Howsam, Bill Marks
Voiced By:
Mark Schardan
Writers:
Hatem Khraiche
Aka:
Retornados
Studio:
Bulldog Films
Genres:
Horror, Sci-Fi & Fantasy

Reviews (2) of The Returned

This shares a title with the acclaimed French film/television series ‘The Returned’, but other than that, these projects are not connected.

This picture works on many levels: it is about the lengths people will go to to protect themselves, about fear, stigma, about hopelessness – and about dead eyed zombies eating people. In a climate where Living Dead films have flooded the market, it is to be applauded when a project attempts to try something different with the genre.

In a post-zombie environment, a serum ‘The Return Protein’ has been developed which – if administered in time – will allow any infected person to live a normal existence, provided they inject the drug daily for the rest of their lives. This, of course, costs a great deal of money, which causes resentment and protest among ‘normal people’. Thus, with this film, being bitten could be a metaphor for many present day prejudices, and works very well with that in mind.

Kate (Emily Hampshire) and Alex (Kris Holden-Reid) are living with the disease, as Alex is ‘a returned’. As such, he faces stigma and hatred on a daily basis. As supplies of the protein become scarce, his life is also the subject of much envy from others. Even his best friend Jacob (an excellent tortured performance from Shawn Doyle) is so afraid of losing his partner Amber (Claudia Bassols), he is driven to take measures that not only betray his friend, but also prove to be utterly futile.

The desperation of human kind, and the control money has over peoples’ lives are the real monsters here. Actual zombies are featured so infrequently, there are times when ‘The Returned’ seems to dissolve into a series of endless, intense conversations. But the viewer is advised to stay with this, because the build-up to the finale is edge-of-the-seat stuff. Although the ending appears to provide closure of sorts, the very human desire for revenge means that the story is far from over even as the credits role.

I loved this ,a Different angle on a Zombie Outbreak, and Aftermath.

More a Drama /Thriller than real Horror as for most f thee movie the Zombie outbreak was years ago and we are dealing with the survivors ,at least whilst the Drugs that contain them are still available .

Sadly the Twist in the tail was pretty obvious from the off , and I would have liked a better resolved Ending dealing with that Twist.

All in all though a Very Watchable Movie ,Entertaining, Action, Drama and Panic but not the usual Happy Ending we've all come to expect .