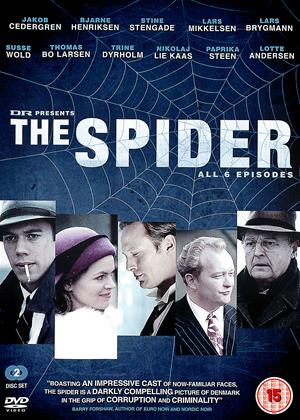 Reviews (1) of The Spider

I've got no idea why this drama is rated so highly. In terms of style, it superbly evokes the austere post-war Denmark of the late 1940s. That, alas, is where the good points stop. The basic plot - a fearless young journalist tries to uncover black market activities and stumbles upon something much bigger - has enough meat for a feature film, but this serial is six hours long! There simply isn't enough plot to carry this much story. Every significant event seems to happen at least twice, or if it involves someone dying, it nearly happens well before it actually does. And who, I wonder, is "the spider"? It's no plot-spoiler to reveal that this strange version of Copenhagen is so underpopulated that if you haven't noticed by halfway through episode one that there's precisely one character to whom our attention is being drawn in in an incredibly clumsy way who isn't directly flagged as a good or bad guy, you really ought to be paying more attention.

The hero is as one-dimensional as everybody else, but unfortunately he's almost permanently on screen, so we constantly have our faces rubbed in the fact that this guy can't act. When you have to establish the main protagonist's sexual magnetism by having women he doesn't fancy at all literally throw themselves at him every so often while he looks vaguely uncomfortable, something has gone badly wrong. Especially if the sexual attractiveness of this man has very little to do with anything. And almost every other aspect of the whole farrago is equally badly plotted. A minor character fakes insanity, and it's clearly established that he was fine yesterday and this is a legal dodge, yet later on he's raving mad and always has been, as if the scriptwriter simply couldn't be bothered to remember whether people who didn't matter very much were mad or sane. Suddenly giving a character a secret gay son who by an amazing coincidence is intimate with another character because nobody in the story doesn't know several other characters really well is lousy writing, and further reinforces the impression that Denmark has a total population of about 100. And so on.

This series obviously wants to be "Tinker, Tailor, Soldier, Spy", but apart from understanding that a long time ago men wore hats and everybody chain-smoked (if you play a drinking game based on the number of close-up shots of filterless cigarettes to prove it really is 1949, you'll probably die), it completely and utterly misses the point. Especially in the last episode. The level of rather dull one-note grittiness throughout implies that we won't necessarily get a feel-good ending, but what we're eventually treated to barely qualifies as an ending at all. Presumably they're hoping for a sequel. I for one won't be watching it.