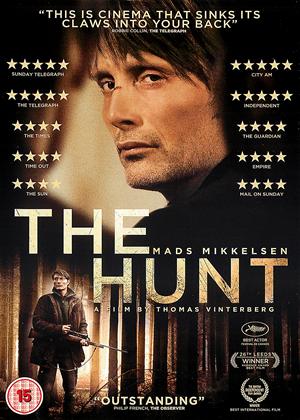 Synopsis:
"The Hunt" unfolds in a small provincial town in the days leading up to Christmas. Lucas (Mads Mikkelsen), a forty year old divorcee, is finally getting his life under control. He's got himself a new girlfriend, a new job and is in the process of re-building his relationship with his teenage son, Marcus. But things soon start to unravel. Nothing significant, just a slight comment here, a random lie there. And as the snow falls and the Christmas lights are lit, the lie spreads like an invisible virus. The shock and mistrust gets out of hand, and the small community suddenly finds itself in a collective state of hysteria, while Lucas fights a lonely fight for his life and dignity.
"The Hunt" is a disturbing depiction of how a lie can quickly become truth - a modern tale of a witch-hunt, injustice, guilt and, ultimately, forgiveness. A fable on how fragile a community can become when gossip, doubt and malice are allowed to flourish. It is a stirring portrait of a man struggling to exonerate himself, and a father and a son reaching out for one another as their world crumbles.
Actors:
Mads Mikkelsen, Thomas Bo Larsen, Annika Wedderkopp, Lasse Fogelstrøm, Susse Wold, Anne Louise Hassing, Lars Ranthe, Alexandra Rapaport, Sebastian Bull Sarning, Steen Ordell Guldbrand Jensen, Daniel Engstrup, Troels Thorsen, Søren Rønholt, Hana Shuan, Jytte Kvinesdal, Josefine Gråbøl, Bjarne Henriksen, Nicolai Dahl Hamilton, Øyvind Hagen-Traberg, Allan Wibor Christensen
Directors:
Thomas Vinterberg
Producers:
Sisse Graum Jørgensen, Morten Kaufmann, Thomas Vinterberg
Writers:
Tobias Lindholm, Thomas Vinterberg
Others:
Mads Mikkelsen
Aka:
Jagten
Studio:
Arrow Films
Genres:
Drama
Countries:
Denmark
Awards:

This film is brilliant - and should have won the Oscar for best foreign film 2012, and every other award going.

This really is a must-see. For all MPs, teachers, paranoid parents, children's groups etc.

The script makes the dialogue, and the characters who speak it, so very believable, as a tragedy unfolds, (perfectly paced), all spurred on by parental paranoia, false rumours, a 'no smoke without fire' reasoning, and the sort of vile mob mentality we often see in Britain today.

Indeed, some of the lines reminded me of some of the silly things my female colleagues used to say when I was a college teachers - the nursery school scenes here show how very stupid such people can be, and how their wooly reasoning destroys an innocent man's life. This movie shows all men are extremely vulnerable to being a victim of such false accusations - which is perhaps why the school system today is being so feminised and female-dominated as to be a man-free zone: why should men expose themselves to a hellish experience like this?

This film should be remade in English and shown to all those thinking of assuming anyon accused of any crime (esp child abuse) is automatically guilty, or that children always tell the truth: the way adults project what they want onto children in this film is brilliantly done, and disturbingly believable and realistic. This makes it moving and sometimes disturbing really - one almost has to watch through one's fingers as the mob of gullible parents turn on their former friend (who is a great teacher!).

Particulatly chilling is the vile head of the nursery who idiotically seems to believe that children never tell lies, and seems to think all men who are ever alone with children are therefore guilty of child abuse.

The way the false accusations grow like a virus and never go away is handled brilliantly right up until the last scenes.

The only part that didn't really work for me was the deer/hunting analogy (though I am not Danish and have never been hunting, so maybe that's why!) - though it works way better than that silly scene in The Queen with the stag called Diana (yawn!).

But that is a small gripe.

This film deserves a much wider audience - and perhaps a remake for those too lazy or illterate to read subtitles.

It fully deserves 5 stars as the best foreign film I have seen in the last year, or maybe the last 5 years.

Great story. Powerful, uncomfortable, sad but beautifully filmed and mads mikkelson just captivates from the moment he is comes into view

I really enjoyed this and thought it thought provoking, atmospheric and well acted.

It was interesting to see the effect of false allegation on one individual & think it shows that, even if believed to be innocent,-mud sticks.

PV's review starts well, but gets a bit bitter. However this is a significant film and well worth watching. This could well be the reason behind why so few men work in nursery schools. If so, that's a shame. There is a wonderful French film about a male school teacher nearing retirement, which I also recommend. Will research the name!

Too sad, too true. - The Hunt review by JD

You cannot watch this film without thinking how pathetically feeble the human mind is. Over and over again innocent people are judged to be guilty and pilloried before the evidence is assessed. Over and over again good people are tarnished permanently by malevolent rumour. You can witness fathers picking their children up from school afraid to be friendly for fear of being judged and tarnished. This film is a sickening well told tale of such a stupidly pathetic psychology that is so common. How can humans call themselves advanced when we can seen so many examples like this. This film will move you to anger, even rage and then to sadness.

One of the best - The Hunt review by BE

A seamless presentation of how an untruth from a child's mouth can bring emotional chaos and upheaval to village folk and the supposed perpetrator in particular. The child is not malevolent but unfortunately, believed by her family, friends and kindergarten staff alike. Mads Mikkelsen mesmerisingly plays the lead role and appears in almost every scene. There are no goodies or baddies as it is clear that the perspective of all those involved respond in their own tunnel vision way to what could have been a bona fide accusation.

Innocent until proven - The Hunt review by CP Customer

Extremely disturbing, powerfully emotional, touching and challenging this film is a must see for any adult with children of their own or not. Tribal judgemental humanity at it's worst.

Worth watching, suspenseful - The Hunt review by CH

4 stars. A good film with great acting, nice scenery and good suspense. The plot is believable, excepting that it doesn't ring true with current stricter standards of safeguarding children in a school environment. The main character's innocence is implied, but you are left wondering just a little.

I took this out because I am learning to speak Danish and one of the tools I use is watching Danish films. This one really stands out for me though because it is so well presented, acted and filmed that I was completely swept along. The storyline, it seems to me, is so relevant to today's society and should be a lesson to us all. I would really recommend this film - you will absolutely love it!

The Hunt (aka Jagten) review by Alyse Garner - Cinema Paradiso

With an opening sequence in which lead character Lucas accurately tracks and shoots an elegant dear The Hunt reflects this imagery of hunting, replacing the natural beauty of the Danish forest with the very familiar human environment of a supermarket, removes all elements of the deer’s grace or the hunter’s prowess distorting the final scenes into that of chilling pack mentality.

Lucas, a much loved kindergarten teacher is just beginning to get his life back on track following the end of his marriage and relocation of his ex-wife and teenage son. Things with son Marcus are just beginning to settle again, whilst he has begun a relationship with a colleague that holds a great deal of potential for emotion and intimacy. Depicted as a pillar of the community and down-right nice guy, things change dramatically for Lucas when a young child with a crush tells what she believes to be a harmless lie.

The speed at which Lucas’ life is destroyed is utterly overwhelming, within moments his standing is reduced to that of the lowest criminal, thrown out of the local supermarket, viciously attacked and beaten, Lucas’ friendships and relationships quickly crumble and he is abandoned by almost all who once loved him.

This shocking yet utterly gripping drama is nothing short of superb – though not a pleasant film to watch, with a particularly harrowing ending and post script the Hunt’s title is as indicative of the dangers awaiting camouflaged in the bushes as its outcome surely is.