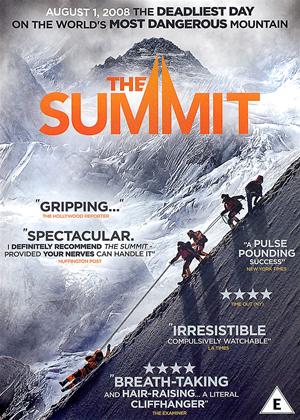 Reviews (1) of The Summit

A very interesting film/documentary. I previously knew little about K2 and the landscapes and story brought it to life for me. Obviously very sad that so many lost their lives on one day and sad for the families who still have unanswered questions. This does the story justice though and highlights the danger these people put themselves in when seeking to climb the highest and most difficult mountains.

I knew nothing of the Summit when I sat down to watch it, having seen it however the story of the eleven people who lost their lives whilst climbing the world’s second biggest mountain, will never leave me.

Notorious amongst the Himalayan natives K2 is said to be one of the most difficult mountains to climb and, according to local legend, has the power to cloud men’s minds. However, on August 1st 2008 the conditions couldn’t have been more perfect when an unsuspecting group of climbers made the decision to attempt to reach the top.

Two days later however, more than ten of them would be dead.

A dramatic story of human determination and a truly amazing look into the human psyche the Summit is somewhere between must-watch and car-crash; I could not take my eyes off the screen and yet at times it was a genuinely painful experience, the tension, devastation, fear and hope felt by those on the mountain is brought brutally and realistically to life in this on-screen retelling of a real life tragedy.

Told with a combination of techniques, from voice over narration (complimenting breath taking aerial shots of the mountain itself), delicate re-enactments, interviews and even footage captured by the climbers themselves on that fateful day, the Summit is one hell of an experience made all the more potent by the truth of the story it depicts.

This is not a film for the faint of heart, but those who manage to complete the climb will emerge on the other side touched by the determination of humankind and the flooring, awe inspiring power of nature.