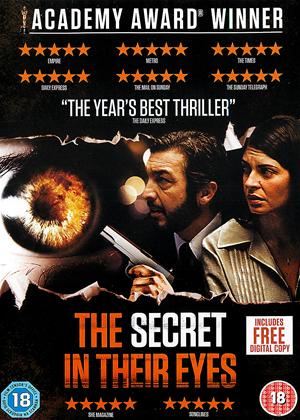 Rent other films like The Secret in Their Eyes

Reviews (10) of The Secret in Their Eyes

This is a wonderful film - highly entertaining and unusual. It keeps up the pace and has a cracking twist ending - though the writer of the novel should get the credit for all that! The acting is top notch - the drunk assistant especially - the flashbacks work well, and the scenes are interesting. My only gripe would be the romantic subplot - this kind of thing works better in novels than films. When that plot strand came along it intruded a bit into the story - but not enough to spoil it. Why can't more films - from anywhere - be like this? Five stars!

Intelligent, thought-provoking stuff - The Secret in Their Eyes review by Mehitabel

To my mind, it was also a meditation on ageing,memory, whether real or false, and on the prisons we build for ourselves. Yes, our hero (if that's the word!), Esposito, a retired cop, is writing an autobiography and yes, it's about an old rape and murder case, which has played on his mind for twenty years. His investigation started with an old photograph of the victim, being watched from behind by a college-mate.. Too many ends were left untied, and now, as he writes his book, he tries to tie them up, with the help of an old police buddy and his former boss.

The role played by the old buddy, Sandoval, a philosophical drunkard, gives the film not only its funniest moments, but its most touching. There are several layers to Esposito's relationship with his former boss, the wonderfully named Irene Hastings; there are no clichés.

I have no idea why this film has an 18 cert. There is one rape scene, near the beginning, which is neck-upwards, lasts a matter of seconds, and is very pertinent. There is also a shot of the photo of the body (naked) also onscreen for a few seconds. And that's it.

My only other quibble is that at the outset, Esposito's assumption about who is, or rather isn't, the murderer seemed too quick, glib and unexplained. But I'd recommend anyone to see this film. It stays with you for a long time - in a good way.

Fantastic all-rounder - The Secret in Their Eyes review by JD

This gem is sort of a whodunnit but has angles of romance, action and memorable philosophy/morality. There is a slow quiet tension that keeps a constant draw to the plot. The acting is outstanding the plot wonderful.

Perhaps I was expecting too much... - The Secret in Their Eyes review by RP

This won an Oscar for Best Foreign Language Film in 2010, it currently has a score of 8.2 on IMDB and is critically acclaimed. Perhaps I was expecting too much – because I was a little disappointed.

The film tells two stories: a story of unrequited love between court investigator Benjamin Esposito (played by Ricardo Darin) and his boss Irene Hastings (played by Soledad Villamil), and also Esposito's hunt for a solution to a rape and murder case.

The film is told in flashback. Now retired, Esposito decides to write a novel about the case that has troubled him for 25 years. Denied justice at the time by departmental political pressures, threatened by the killer, having his colleague murdered in his stead, Esposito has good reason to be troubled. He writes his novel, tracks down the husband of the murdered woman – and discovers the revenge he has taken. And at the end Benjamin and Irene get together at last. Hmmm....

I've not seen much (any?) Argentinean cinema before and not speaking Spanish I can well believe that I missed some of the subtlety of the dialogue. There are some good bits – the identification and chase of the chief suspect in the football stadium was well done, the meaningful glances are well done, the hints of corruption and violence in 1970s Argentina are well handled.

I didn't dislike it – it just didn't seem as strong a film as others have found it. I'll give it 3/5 stars.

A very good drama with a very unexpected ending. My only criticism is that I lost the plot a few times and couldn't work out who was doing what, and for what reason. I think her love for him could have been just a bit more obvious - I wasn;t sure until the end whether she did or not !

Worth the effort to watch. - The Secret in Their Eyes review by RP

As others have said, part crime, part romance. Being unfamiliar with Argentinian law enforcement it took a while to work out who was who/did what.

A really enjoyable film with lots of layers to keep you hooked. The murder itself, all those touched by , or involved in, the murder and the relationship between the detective and his boss, along with the detective's relationship with his alcoholic (wonderful) friend. It is also a very romantic film with a wonderful frisson and undercurrent between the two key characters. I would happily watch this film again.

Firstly, an admission - I had no idea that this was an Argentinian film - I thought that it was from Spain, but that is irrelevant.

A nice mix of love, crime, friendship, memories, ghosts, retribution, wondering, questions - all contained within a single storyline played out over 25 years.

Give it a viewing

Yes, this is a thriller and, at times, very tense but it is much much more. It is also a very funny film. There are a couple of running gags throughout the film; listen for the references to the typewriter and whether to close the door or not. It almost verges on farce. And there are some one off gags; watch for the dog in the break in; an outright laugh out moment. It is also a very romantic film; there is love across both the age and class gap but I'm not going to spoil your viewing by revealing any more. So it works on many levels and for these reasons I'd recommend it. It is also a classic example of a film that if Hollywood decided to do a remake you just know they would ruin it.

A game of Charades....is it a book, is it a film? - The Secret in Their Eyes review by CH

Maybe I'm not the best person to review Secret in their eyes. It's the second time I have rented it, but I wanted to give it that second chance and knew this was a film my partner would enjoy. I was right.....he did.....all the nuances and twists and turns that I had missed ( both times) he praised highly. All I could think is, who would spot, from a previously seen photo, the murder suspect in a football stadium of thousands of roaring, scarf waving fans? I had just watched Nine Queens, another Argentinian film which is a sparky clever masterpiece of entertainment. No comparison at all to the rather dark, existentially morose (and occasionally slushy) Secret. I accept that thousands won't agree....so don't let me put you off renting it.

This Spanish language film directed by Argentine director Juan Jose Campanella is a crime thriller based on a novel. The story starts with a retired criminal investigator Benjamin who is not convinced about the outcome of one of his past homicide cases.

While his meeting with former superior Irene, he informs her about his decision to write a novel based on the case. Benjamin also had a crush on Irene when they worked together in various cases. The film continues with the unfinished murder case and the untold love.

The film travels with equal importance for both the unfinished case and the untold love.

Ricardo Darin as Benjamin has delivered a wonderful performance and so does Soledad Villamil as Irene. The emotional sequences handled by these two lead actors are quite amazing. The story mainly deals with crime and love. This kind of narration needs special skills to deliver the essence of both genres to the audience.

The movie has many other characters with some lively acting. For instance, the alcoholic assistance of Benjamin played by Guillermo Francella has done a decent job.

What makes the movie exceptional is the powerful narration of the director. Some moments are very much intense and the acting is quite clever.

Cinematography is another important area in which the film scores exceptionally well. There are some scenes which make you wonder how the camera work is done without special effects. The movie has the right mix of emotion, suspense, love, humor and thriller. The movie scores well in almost all departments and this makes it a worthy watch.