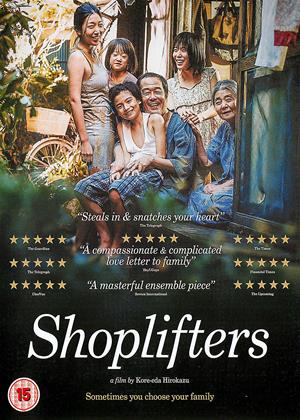 Kore Eda delights in the outsider status of the family, and the way they metaphorically hold two fingers up to society, and he depicts their life with joy and humour.

Living in a tiny, overcrowded squalid house, the adults work in low-paid insecure jobs and thieve to make ends meet, but also as a way of life. The film has the feel of a Dickens novel, filled with fruity, larger than life characters, and cliches like 'loveable rogues' and 'tart with a hart' come to mind. And, like Dickens, Kore Eda has a tendancy towards sentimentality. Even these thieves have a moral code (its okay to steal as long as you don't put the shop out of business), and they rescue an abused and neglected 6 year old girl and give her the love and kindness she has never had.

All the acting is superb, including the children, and there are so many wonderful scenes such as the family's day at the beach, a tender scene between the wife and the rescued girl, the child's small feet twined around the legs of a chair is telling and moving.

Kore Eda based the film on a real case in Japan, but as the judicial system catches up with the family, the film becomes less engaging.

Unsettling yet.. - Shoplifters review by AM

Koreeda's films are so often about the dynamics of family, friendship vs family, nurture vs nature and so it is here.

The set-up, about what appears to be a family at the very bottom of the social scale who take in an neglected child (it's not kidnapping if they don't issue a ransom) is only the beginning. Gradually the dichotomy pf their moral choices is revealed, and questions are raised. Unlike JR, I felt the final section of the film necessary to pull threads together, particularly as it is based on a true story. Not his best film for me (that is I Wish), but easily good enough.

An unconventional, impoverished ‘family’ survive in whatever way they can. They may be breaking the law but they love and support each  other as far as possible. The setting is claustrophobic and the eating habits are not pleasant to a Western ear but it is hard not to become engaged with these poor, struggling people.

This is an interesting and moving film, which shows how a family of misfits survive on the fringes of Japanese society, resorting to casual work, low-level scams and shoplifting on a grand scale. The first 70% of the movie tells us about the life of this unusual family unit; it is perhaps a bit too long, but the acting is very good and the story is convincing. In the last 30% of the movie, things become perhaps more captivating, as many of the family's secrets are revealed.

I would certainly recommend the film, if you like this kind of social-realist movie. I've been to Japan twice -- a country that is very modern, very clean, and very safe, where there is very little crime -- but this film shows another side of Japanese society...

I've not seen any of this director's work before - it reminded me very much of Mike Leigh using observational narrative to tell a story whilst painting a picture of real life, warts and all.

Very engaging, generates a lot of sympathy for the characters in the 'family' with all their difficulties and creative responses to those problems. I imagine it might be a fair depiction of less-privileged life in a modern Japanese city, it certainly came across that these were real people. And then there is the increasing undercurrent of uncertainty about what exactly is going on here as the narrative elements develop which provides a dramatic tension that keeps you engaged.

In the end (trying to write this without making a spoiler) we are confronted with a deep question about what exactly a family is. Well worth watching, I can imagine a very similar story being told in a more familiar (English) milieu which makes this a truly great international film.

The story is involving and the setting convincingly real. The acting is very engaging with moving performances by the children. A film that makes a real impact making you think about family relationships.

Still thinking about it days later. - Shoplifters review by CW

I totally agree with the other reviews. This is an absolutely marvellous movie, an in depth character study of an assembled family. They are not related but they are drawn together, live in tiny cramped rooms and show great affection to one another. It is definitely not a US nor UK movie because no one gets a happy ending. This is a heartbreakingly lovely tragedy. I loved the camera that lingers on the sweet faces. The acting and directing are precise. I want to watch all of Koreeda’s movies. The other reviewers have described the movie much better than I am able so I will just say I highly recommend it.

Based on a true story

Writer & Director Koreeda intimately unveils the bitter sweet story of a family of different generations supporting, surviving and sharing together until their secrets are revealed. Sensitive, soulful and sensual storytelling Beautifully shot and acted

This Japanese family drama is the kind of film whose subject matter and arthouse praise would normally encourage most people to avoid it like Covid-19. Force yourself to make an exception. This is brilliant stuff, well worthy of its best film Palme d’Or and Oscar. Beautifully observed, masterfully directed, heartfelt and wise, with a last half-hour that stirs and subverts in equal measure. It grabs from the start as the family take in a 5yo girl who’s both cute and abused. From there it draws you in unwittingly before exploding in a devastating final half-hour you’d have to have a heart of stone not to be gripped by.

This film is essentially in two parts. In the first an already poor family take in a young girl who we learn is being abused by her parents. We watch as this little girl becomes part of the family. It is Dickensian, as other reviewers have said, but this group of people in terrible circumstances just about keep their heads above water. It is heart-warming to see the abused little girl come back to life is the warmth of her new, adopted family. Then we come to part two. This family also have their skeletons, which become clearer as the film progresses. They supplement their meagre incomes with shoplifting, and it is shoplifting that brings about their demise. I will not give away any spoilers, but I didn't see what was coming. The film packs an emotional punch as the protagonists adjust to this development. Beautifully shot, very believable, and well directed. Prepare to have your heart punctured.

I have no idea why people think this is a wonderful brilliant 5 star film - maybe just because it won at Cannes (which gives awards to some right dross, and no mistake).

This is not a bad film BUT the first half is overlong - you could cut 30 minutes or even half an hour from it easily; far too many scenes of people sitting around talking and eating.

It gets interesting later but time really dragged in the first half.

Also, I am not sure I believe the story - which means I cannot suspend disbelief. Overall, PARASITE is far better.

Very interesting to see the poor side of Japanese culture though - different from what we usually see. Poor working class/underclass Japanese people struggling to get by in a law-abiding society. Smalltown Japan.

It was fascinating to see them also drinking from CODD BOTTLES - the glass ones with marble stoppers. Common in the UK in 19th and early 20th C. You can buy them from antiques shops at £5 each or less.