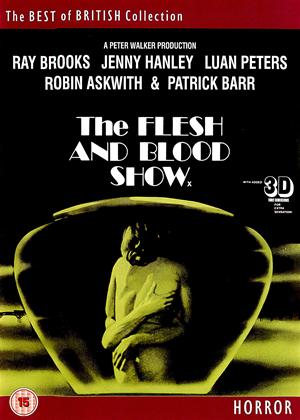 Synopsis:
A deranged horror from British director Pete Walker in which a group of young actors are lured to an abandoned seaside theatre at the end of a pier with the offer of work. Mike (Ray Brooks), Julia (Jenny Hanley) and Simon (Robin Askwith) travel to the seaside town of Eastcliff to meet the rest of the cast and producer in order to rehearse their play before taking it to the West End. But in the style of Ten Little Indians, the cast begins to mysteriously vanish one by one, prompting the survivors to investigate the mysterious theatre company which has brought them together and the derelict theatre's unsavoury past.
Actors:
Ray Brooks, Jenny Hanley, Luan Peters, Robin Askwith, Candace Glendenning, Tristan Rogers, Judy Matheson, David Howey, Elizabeth Bradley, Rodney Diak, Penny Meredith, Sally Lahee, Raymond Young, Carol Allen, Alan Curtis, Brian Tully, Jane Cardew, Tom Mennard, Stewart Bevan, Michael Knowles
Directors:
Pete Walker
Writers:
Alfred Shaughnessy
Studio:
Odeon
Genres:
British Films, Classics, Horror
Countries:
UK

Rent other films like The Flesh and Blood Show

Reviews (2) of The Flesh and Blood Show

Spoilers ... - The Flesh and Blood Show review by NP

This reminds me of a slimmed down version of the mighty Vincent Price vehicle ‘Theatre of Blood’, which was released the year after this. Filmed for the most part in the Pavilion Theatre in Cromer, this involves a group of unemployed young actors who are invited to an abandoned theatre by the sea to perform a play, where one by one, they get brutally murdered. The location proves to be an excellent horror venue. Cut off from reality to certain degree, it becomes a world within a world wherein literally anything can happen.

Ray Brooks is the head of the young actors group and he provides a reassuring lead as much around him falls apart. The occasional showing of the police doesn’t seem to improve the situation, and only the friendly local Major Bell (encountered in a local café, which provides a brief yet strangely sinister respite for the troupe) seems to provide a reassuring outside presence.

Jenny Hanley, whose identity is somewhat enigmatic by the close, plays posh Julia Dawson. Unlike her appearance in ‘Scars of Dracula’, she is allowed to use her own, un-dubbed voice – which is fine. Quite why the producers of the 1970 Hammer picture insisted she be dubbed by another actress is a mystery – and to her also, according to interviews. Hanley is also subject to clearly having a body double for revealing close-ups. I wonder how she felt about that?

This is one of Director Pete Walker’s better films. Not quite on a par with ‘Frightmare’ a couple of years later, but coasts along at a good pace, and punctuates the uneasy atmosphere with occasional scenes of gore. The climactic moments were apparently shown in 3D on the film’s initial cinematic release.

Peter Walker wasn't far off being Britain's answer to Herschell Gordon Lewis: an unashamed purveyor of brand of sleaze famed, indeed notorious, as a director of horror that was surprisingly nasty for its time, but just as happy, if not more so, giving the punters pretty girls taking their clothes off if that was what floated their boat. Like Lewis, Walker's horror was far better than his sexploitation, and this film contains a considerable amount of the latter but disappointingly little of the former. The very first thing that happens is a pretty girl (Luan Peters, best known for playing the Australian tourist accidentally groped by Basil Fawlty) being awakened in the wee small hours by an unknown person knocking frantically at her door for an unknown reason. So naturally she answers the door stark naked. As you do. This sets the tone for quite a lot of the movie, though fortunately not all of it.

The plot concerns a gaggle of middle-class hippies fresh out of drama school who are hired by a mysterious man whom their agent has never actually met to camp out in a semi-derelict theatre at the end of an abandoned pier on the pretext of rehearsing a stage-show which has a title (I'm sure you can guess what it is), but no script, theme, or any other content whatsoever. So they'll have to improvise it all, and whatever they come up with after randomly mucking about for a few days will go on tour and doubtless be a smash hit. Somehow the youngsters fail to notice anything odd about any of this. Talk about lambs to the slaughter...

Although the dismalness of a British seaside resort in Winter and the eery atmosphere of a once-grand pier rotting into obsolescence (which also features prominently in that surreal oddity "Carnival of Souls") are used quite effectively, I had the distinct feeling that the film's contrived plot uncomfortably mirrored real life, and having the actors improvise in character was an attempt to disguise the fact that they really were making it up as they went along. The shapelessness of the story, the gratuitous and pointless nude scenes which give the audience regular fixes of "adult content" far easier to film than a complicated stalk-and-slash sequence, and several moments when the cast clearly don't quite know their lines certainly give that impression.

Which is a pity, because there's a good story in there somewhere trying to get out, and the young cast are quite engaging once they catch on how much danger they're in and stop spending every waking moment trying to sleep with and/or annoy each other. And it really is such a superb location that I'm puzzled why so few British horror movies were shot in similar places. But it's a pale shadow of Walker's masterpiece "Frightmare", and the pointless gimmick of shooting the black-and-white flashback sequence near the end in 3D (included as a DVD extra, but you have to supply your own red and green glasses) implies that even Peter Walker didn't think his film was good enough to succeed purely on its own merits. I'm afraid he was right.