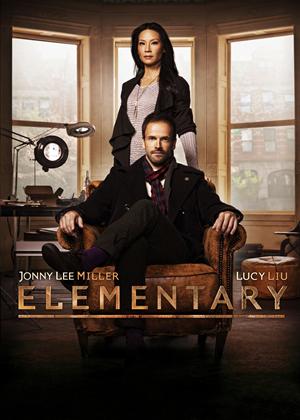 There was a lot of side-eyeing at the time that Elementary strolled onto the TV scene. The retooling of a modern Sherlock Holmes had already been pervading the BBC and PBS airwaves with a stellar cast and masterpiece assembly. Then came Elementary, the Americanized take on the classic detective. While fitting neatly into a range of police procedurals polluting primetime television, there’s hardly a clue of something more in this by-the-numbers revision of a by-the-book character.

To be fair, the retooling of the format is not a terrible decision, if not a tad predictable of the primetime assembly line. Sherlock Holmes is now a modern man played by Jonny Lee Miller with the same level of misfit and observance. As a former Scotland Yard consultant, he now resides in New York City, fresh off rehab and ready to solve more mysteries. He’s paired up with Dr. Joan Watson (Lucy Liu), the reluctant companion hired by Holmes’ father to more or less be his sponsor to keep him off drugs. They soon find themselves dashing across the Big Apple trying to resolve matters of murder and mystery. And, of course, there’s a nemesis of Jamie Moriarty (Natalie Dormer) to keep the series more serialized than episodically procedural.

Created by Robert Doherty, the show is a tricky balancing act of trying to pose an interesting detective character amid a lukewarm cop show. Try as Miller can, he can’t hold this ship together as powerfully as Cumberbatch, but he certainly does his best. He has his moments of being a unique and layered individual, but most of that seems to come more from the quieter moments and less on the cases. As an example, one of his earliest cases finds connecting the dots by hearing wrestling on a television in a bar. His realizations are not as complex and come about as stock where one could see any semi-savant detective coming to such conclusions. It’s as though Miller brings his best to the table, but when he’s forced to become a detective, the show slips into that exposition wasteland.

Lucy Liu also holds her own fairly well as a character who is more or less forced into this position and tries to make the best of it. Her chemistry with Miller is present and most of the time it’s the highlight of the episodes. It brings a smile to my face to see this duo slowly rise in the ranks of being day-savers rather than slam straight into being the most astute detectives in town. But then comes that moment when Holmes must show off how obsessed he is and how apt he is solving the case with great amazement. Perhaps that passion diminished with drugs or the network TV format, but it just doesn’t feel as astounding when filtered through this lens.

For all that it aims to be, Elementary isn’t too shabby for what it sets out to be. For reaping the British characters off the pages and into the States, it doesn’t stumble too much. If anything, it plays itself too safe by slipping so comfily into seven seasons of standardly sufficient police procedurals. It’s certainly a notch above the rest, but for being a Sherlock Holmes adaptation, one feels as though there should be more than just another detective show.