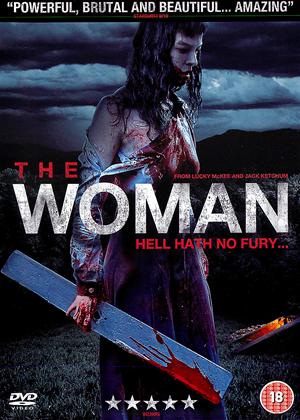 Reviews (2) of The Woman

The story of the Cleek family...not your normal family. Moulded by Chris the head of the household who has questionable morals. Chris captures a woman he finds in the wilderness who is apparently a last surviving member of clan (who is of a very savage nature a bit far beyond the plausible) and decides to try and civilise her. This brings danger and even stranger behaviour to this family. From here on the movie unravels.

The points the movie tries to make are over top in your face from strangely placed music scores with obvious lyrical meanings to shockingly graphic and disturbing scenes.

If you easily disturbed this film may not be for you.

I've given this 3 stars but it's more like a 2.5. Could have been a lot better if it wasn't for the over the top and brash style

Sean Bridgers plays Chris Cleek as the antithesis of smug. Head of a family of acquiescent children and a particularly spiritless wife Belle (the always excellent Angela Bettis), he happens upon a wild woman (Pollyanna McIntosh, who would be so good in 2014’s ‘White Settlers’), half-naked, hunting fish in the wilderness. With typical arrogance, he announces he is going to capture her, keep her chained up in the shed and ‘civilise’ her. Happily, one of the first things she does is bite off his finger, for which he punishes her.

Cleek clearly considers his prisoner something he has the right to exercise control over, to demand obedience, on which to stamp his authority. He introduces the family to his conquest, whom he describes as a ‘project’, and decides it is their shared responsibility to ‘help’ her. ‘We can’t have people running around the woods thinking they are animals; it isn’t right,’ he states with authority, and by this time my detestation of this monstrously presumptuous, ‘civilised’ man is huge. Belle questions the wisdom of what he is doing, and he gives her a slap, which she receives with no emotion.

Watching this film is an intense experience. I wouldn’t imagine Director Lucky McKee is making a point as mundane as the untamed woman is more civilised than her ‘acceptable’ captors: as events move on and her humiliation worsens, we see echoes of daddy Chris’s dysfunctional behaviour in his children: his family is a fragile unit. The eldest son Bryan (Zach Rand) sneaks out of the house one night to spy Daddy having sex with the bound woman, and this, he feels, gives him the right to sneak in later and torture her. When eldest daughter Peggy Cleek (Lauren Ashley Carter) is visited at home by her concerned teacher, her unconscious mother is being lifted out of the kitchen after Chris’s latest physical assault. The Woman is incidental to the family’s apparent psychosis, just an additional release for it.

Warnings notwithstanding, I won’t spoiler any more of this. Suffice it to say that events in general, and Daddy’s behaviour in particular, rapidly hit several new layers of depravity to such an extent that merely labelling Chris Cleek as obscene becomes inconsequential, the film itself reaches stages of repellence that straddles brilliance and absurdity. Although the ending brings with it a conclusion of sorts, there are several questions pleasingly unanswered, and a post end-credits sequence that can most conservatively be labelled ‘bizarre’.

Recommended, but finish your dinner first.