Rent The Disappearance of Alice Creed (2009) 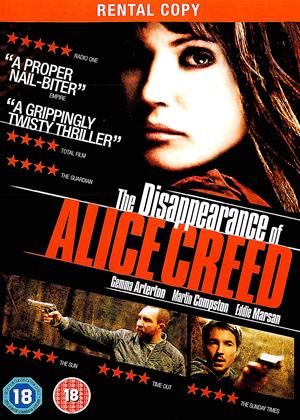 Synopsis:
On a suburban street, two masked men seize a young woman. They bind and gag her and take her to an abandoned, soundproofed apartment. She is Alice Creed, daughter of a millionaire. Her kidnappers, the coldly efficient Vic and his younger accomplice Danny, have worked out a meticulous plan. But Alice is not going to play the perfect victim - she's not giving in without a fight. In a tense power-play of greed, duplicity and survival we discover that sometimes disappearances can be deceptive.
Actors:
Gemma Arterton, Eddie Marsan, Martin Compston
Directors:
J Blakeson
Producers:
Adrian Sturges
Writers:
J Blakeson
Studio:
Icon
Genres:
British Films, Thrillers
Countries:
UK

Rent other films like The Disappearance of Alice Creed

Reviews (6) of The Disappearance of Alice Creed

This is a low budget UK film. There are only 3 members of the cast and the action takes place mostly in what appears to be a flat. The basic story is that of the kidnapping of a young woman planned to perfection to extort money from her rich father. The protagonists are two ex cons who, at the start of the film, we see thoroughly preparing the location where they will keep their hostage. Everything looks meticulous. Only once they have there hostage do things start to go wrong. I can't give too much away, but there is one major flaw that you will not expect. The story and script are pretty good and keep you guessing as to what will happen. The cast are all excellent especially Gemma Arterton in what must have been a difficult role. The film moves along quite quickly and doesn't drag. All in all if you don't mind a film without big hollywood stars and you like a bit of tension and twisty plot, then I would recommend this. Film 4/5, Blu-Ray Picture 3.5/5, sound 3.5/5

Apart from an ending that feels tacked on - (the film should have ended 2 minutes before it did) - this film was excellent. Only three actors, no fancy locations - and no dialogue at all for the first 9 minutes. It's clearly emulating Pinter; it's also full of twists, and how much you like this will depend on whether you can suspend your disbelief here! But a highly enjoyable thriller nontheless. Recommended.

3 person cast - The Disappearance of Alice Creed review by JD

This format really suited me. 3 members in the cast with constantly changing dynamics in a few small environments. There is great movement to the plot which is based on a kidnapping which in itself is dramatic enough. I wish more films were done like this.

Thrilling! - The Disappearance of Alice Creed review by CP Customer

An excellent British film. Has just 3 actors and limited scene settings but the end result is fantastic. Blew me away! A few twists and turns too.

Boring - The Disappearance of Alice Creed review by CP Customer

Another young girl with rich daddy gets kidnapped.

How many movies have covered this?

Sure she doesn't give up without a fight but the two kidnappers described as being efficient are, in reality, cretins.

Reservoir pups - The Disappearance of Alice Creed review by PT

Most of the film taking place in one location reminded me of Resovouir Dogs. Ok it might not be as good as Dogs, but a cracking Brit film nonetheless. Strong performances from all the characters, and an excellent script. Keeps you hooked with its intensity, and there are a number of, wow , didn't see that coming twists. You don't have to have a budget of a 100 million to make a classy movie.