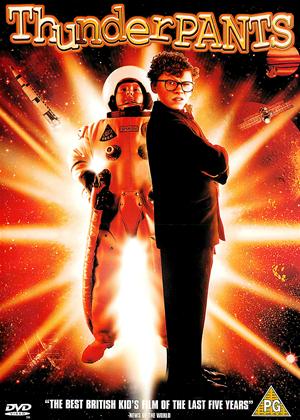 It's an ill wind... - Thunderpants review by Count Otto Black

This incredibly misconceived comedy was the first attempt to bring a character from "Viz Comics" to the big screen, and the only good thing anyone in their right mind could possibly say about it is that it's nowhere near as bad as the second live-action Viz movie, the unbelievably horrible "The Fat Slags". Viz, which isn't even mentioned in the credits, had absolutely nothing to do with the film after they signed away the rights for a bit of easy money, never dreaming anyone would actually make the movie. Which is presumably why the main character's name was changed from Johnny Fartpants to Patrick Smash, though he looks as much like his comic-strip counterpart as a living person possibly can.

They should have stuck with his original name, because the idea of a couple whose surname just happens to be Fartpants coincidentally having a son who lives up to it in spades is a lot funnier than any of the jokes in this howling clunker. The decision to adapt a scatological spoof of a children's comic-strip aimed at adults back into a children's film inevitably waters down the humour to near-homeopathic levels, and the gleefully hyper-flatulent Johnny becomes the lonely misfit Patrick, whose unwanted talent makes him miserable until unlikely events turn him into a hero admired by the whole world. Which misses the point about as entirely as it's possible to without coming back round and hitting it from behind by mistake.

Bruce Cook, who gets the dreaded "and introducing" credit, stars as the boy with two stomachs. After this inauspicious debut, he had bit-parts in two more movies, and hasn't been heard of since 2003, which, judging by the level of talent he shows here, is just as well. Rupert Grint, fresh from the first Harry Potter film, is even worse than he was in that, to the point where he almost makes Bruce Cook seem fairly good when they're on screen together. Second-billed Stephen Fry is in the movie for three minutes, in the same scene as "Carry On" veteran Leslie Phillips, whose dialogue consists, in its entirety, of: "Order! Order!" and "The witness will answer the question." How we laughed. At least Simon Callow and Ned Beatty put in a bit of effort and overact like the troupers they are, though somehow I doubt that either of them likes being reminded that they were in this turkey.

Nowhere near as funny or as filthy as it needs to be, it doesn't even fail spectacularly enough to be memorably disastrous, and the triumphantly life-affirming last act is simply nauseating. Johnny - I mean Patrick - even gets to make a speech obviously meant to inspire any disabled children in the audience to never give up their dreams. This from a boy who gets to be an astronaut at the age of ten because he farts a lot. Funniest joke in the whole thing: the theatrical trailer which manages to avoid mentioning that the movie involves farting, even though that's its entire and only reason to exist. By the way, if this film really did get 60% on Rotten Tomatoes, Rotten Tomatoes is broken.