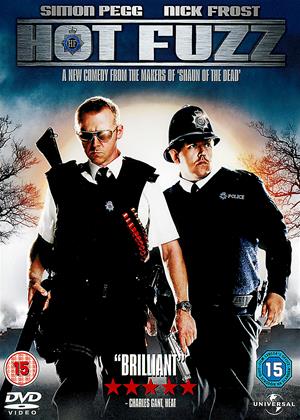 Simon Pegg plays the part of a London Policeman who is dedicated to his job. His dilligence and mammoth arrest record are embarrassing the rest of the department so he gets packed off to a sleepy little village where he tries to maintain his enthusiasm whilst not dying of boredom. However, all is not as it seems as people start to mysteriously disappear or turn up dead in rather horrific circumstances. There are moments of genuine hilarity, together with some blood and gore which is so outrageous that you have to laugh. Nick Frost is good as the hapless sidekick, and it ultimately turns into a buddy movie. The action sequences are great, AND funny. Recommended for a night in with your mates.

One of two funny scenes, but on the whole slow and painful.

Shaun of the Dead in Uniform! - Hot Fuzz review by CP Customer

Edgar Wrigh and Simon Peggs seconds collaboration, after the outstanding 'Shaun of the Dead' is more of the same and then some!

It concerns PC Nicolas Angel (Pegg) sent to the sleepy town of Sandford because he was so good as his job he was making the his colleagues look bad.

There he is teamed with the overweight, lazy but loverable Danny Butterman (the hilarious Nick Frost) as they investigate apparent 'accidents' weeks away from the village of the year awards.

The film is one of the funniest I've seen since 'Team America' and is very much of that humour as 90's action films are spoofed throughout.

I cannot recommend this enough. Great to watch with a few beers with your mates or even with your missis if she has a funny bone! If you're not laugh then it's probably because you're dead!

a good film but a bit boring i thought it would be funnier i got bored watchin half way through .

Despite a fine cast of British character actors, I'm afraid I found this tedious and rather unfunny. A grave disappointment after Shaun of the Dead.

Bleeding obvious culture shock comedy in which Simon Pegg plays a tough city cop (see, it's already not working) sent to a rural village in order to stop annoying everyone, and to be teamed up with slowpoke yokel Nick Frost. What follows is at the level of obviousness suggestive of late period French and Saunders, with a slow motion gunfight a key nadir. Two bloody hours long!

Amusing without being hilarious, with dry observations and personal interactions to the fore.

Well worth a watch but the end-game does go a bit OTT!

This is the second film in an unofficial trilogy - the others are 'Shaun of the Dead' and 'The World's End'. Having recently seen 'The World's End' and found it very disappointing, not to mention unfunny, I thought I'd watch 'Hot Fuzz' to see if it was as amusing as I remembered it - and it is.

You know the storyline - straitlaced supercop Nicholas Angel (Simon Pegg) is offloaded to rural Sandford in the middle of nowhere, where he teams up with bumbling PC Danny Butterman (Nick Frost) and uncovers a bunch of demented village serial killers.

Ridiculous of course, but great fun. It is of course silly - and much of its humour derives from just that, together with every cop movie cliché in the book, not to mention some satisfyingly gory bits. Great stuff!

Look out for a raft of British acting talent in minor roles - Olivia Colman as a very non-PC PC, Paddy Considine, Billie Whitelaw, even Bill Nighy and Steve Coogan - and a few well-known actors in bigger roles including Timothy Dalton, Jim Broadbent, Edward Woodward. Everybody gets a look-in - even a heavily disguised Cate Blanchett gets a part...

'The World's End' failed for me because Simon Pegg's on-screen character was unlikeable with few if any redeeming features. Here, you can laugh at him and eventually with him as his character begins to loosen up. Made me laugh anyway - which is more than I can say of 'The World's End'

Great stuff - I'd probably give it 4/5 stars, but as I find it even funnier than 'Shaun of the Dead' I'll give it an over-generous 5/5.