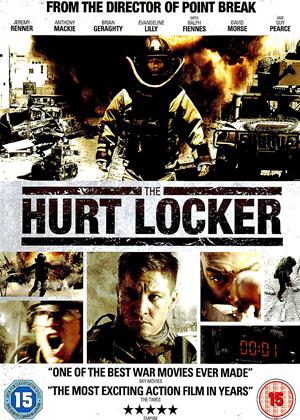 Reviews (8) of The Hurt Locker

I was extremely pleased that this film has received such accolades as I saw it and thought ‘Wow! This is really cool but I bet no one else likes it’. What really appealed to me was the deeply messed up and bent out of shape nature of the soldiers and how they had to sell their psyches in order to get through the war. It’s a truly modern tale of today’s type of military conflict and rates along side the excellent ‘Generation Kill’.

If you want big battles and big body counts go else where. If you want a sustained, dissonant crawl though a modern war then ‘Hurt Locker’ is the muts nuts.

I can see why this film won an Oscar. The film technique really takes you to the war zone and makes you feel like you are really there. It's in the tradition of Apocalypse Now et al. Off beat and yet very poigniant and gritty. If you like war movies with a difference without the all American Hero done good then you'll love this one.

Danger is a drug - The Hurt Locker review by Pete W

A gripping representation of life in an American EOD team in Iraq. This doesn't present the guys as purely heroes but shows the corrosive effect of the constant pressure in terms of their relationship with each other and with outsiders. Not afraid to duck the possibility that the whole adventure may be pointless.

Not for the girls. - The Hurt Locker review by CP Customer

Suspense good at times especially near the beginning, but overall not enough of a story. Cant imagine many women enjoying it.

Good war film, felt like it went on a little long and got a bit bored. Some hair raising uncomforatble moments. Worth a watch but not an all time great.

The Hurt Locker is quite simply Full Metal Jacket for the modern generation and brings home the gruesome and harrowing reality of war today. It would be easy to dismiss this film as another entry in the growing Middle East chronicles from Hollywood. Yet Bigelow does not pull any punches in her gripping portrayal of a bomb squad operating in Iraq. The soldiers do not act like heroes but are people like you and I, doing a frightful job in deadly situations and somehow trying to deal with the emotional consequences. The use of various camera angles provides the film a lifelike documentary feel that isn’t afraid to show the ruthless of the insurgents but also the American military machine. Other directors would have put the emphasis on action, heroic endeavours and huge explosions for the popcorn masses yet the actual experience is far more memorable and unsettling. I never thought I would see the equal of Full Metal Jacket but here it is.

The previous reviews have said it all really, but on watching Hurt Locker, which incidentally is a slang expression for the treatment room for injured soldiers in the war against Iraq, although the film was apparently shot in Amman in Jordan. Not being a war film aficionado, I found it a little ponderous in places, but there's no doubting that it was a very well crafted film.

Watched this movie and just got so engrossed. Every moment is tense and it is amazing that people actually go and do this kind of thing for a living. I also noticed the film hardly had any music in it which you did not notice as the film sucks you in at every moment.