Rent What Have They Done to Your Daughters? (1974) 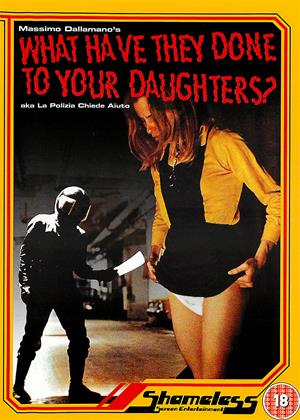 Rent other films like What Have They Done to Your Daughters?

Reviews (1) of What Have They Done to Your Daughters?

Spoilers follow ... - What Have They Done to Your Daughters? review by NP

This giallo doesn’t mess around: after the opening, the very first scene features police bursting into a room to find a young naked girl hanging. Dead. What makes the scenes that immediately follow so horrifyingly effective is by Director (and co-writer) Massimo Dallamano having his camera observe events from the girl’s height, almost from her point-of-view, and as such, half the screen is filed with her dead face, mouth agape – almost as if she is observing events. She was promiscuous 15 year-old Sylvia (Sherry Buchanan) who promised her mother that if she told her father of her activities, she’d kill herself. And yet Sophia Loren-alike Asst. DA Vittoria Stori (Giovanna Ralli) is sure it was murder.

It was felt at the time that giallo films were not as popular as they once were (which, if true, is understandable; there had been many made during the previous few years), and so this became a fusion of giallo and poliziotteschi, with more attention paid to police procedures than focusing on more ‘standard’ civilian characters. Dallamano made this as part of a trilogy of such films, beginning with 1972’s terrific ‘What Have You Done to Solange?’ and ending with ‘Red Rings of Fear’ in 1978 (sadly, he died before completion).

This slight change in style provides a welcome change in emphasis, as far as I am concerned. I find giallo a highly enjoyable genre, but this works well as an extention of that. Some truly gritty, gruesome set-pieces enlivened with Stelvio Cipriani’s excellent score, ensures that the pace very rarely slackens. There are disturbing scenes too, when the police listen to recordings of intimate events occurring in the teenage prostitute ring that may or may not be behind the death. Even with the dubbed voice artists, it is uncomfortable listening. It gets even more uncomfortable when it seems Inspector Valentini’s (Mario Adorf) own daughter may be involved.

Alongside Vittoria Stori, we have Inspector Sylvestri (Claudio Cassinelli), who is the nearest we get to the staple of most giallos: a tough talking gent who is a bit of a twit. He comes good in the end though, reacting like granite when he helps apprehend and uncover the identity of the miscreant. Getting the authorities to act upon such a major vice ring connected to some very high places, however, is another matter. How little times change.

A big hand too for the blood. Far more realistic than the bright paint used in similar films.