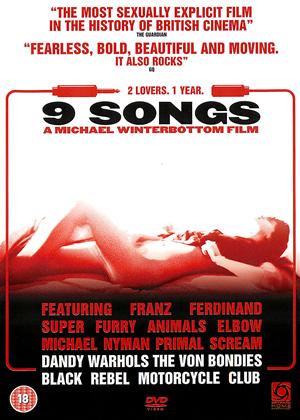 What a load of Shiza - 9 Songs review by CP Customer

The film is just a jumbled up mess of concerts and sex. Acted very badly, the lead actress must be special needs. You do get to see her minge but that is no consolation.

I haven't got the faintest idea what this film was trying to say. Perhaps it was just an exercise to see how far you can push the boundaries of censorship. Yes, you get to see total nudity, erections - the lot. But why?

It's hard to see what Winterbottom was trying to say with this opaque glimpse into the relationship between two people; the main reason for this is that we never get more than just that, a glimpse. Sadly the first British mainstream film to feature real and, in the main, relaistic sex, is a missed opportunity that makes you wish someone with more on their mind than just pushing censorship boundaries had been at the helm. Usually I would start a review like this by saying that the film focuses on the relationship between the two protagonoist, but it really doesn't. What we get is a collage of concert footage, sex scenes and domestic scenes, but at no time are we allowed into their relationship or even their characters - the male protagonists' name isn't even mentioned onscreen - with get only the slightest hints of their personalities - he's a scientist who waffles on in voiceover about ice and she may have mental health issues. They both snort coke and, in one scene, visit a lap dancer who gives Stilley's character oral sex which seems to cause her some emotional problems... for about ten seconds. And this is the films fatal flaw: it never takes its dramatic promise anywhere at all. Just when you think a story line is kicking in the film cuts either to another concert - and was that the best indie music they could get? - or another sex scene.

This film had so much potential and could have been a searing exporation of the path a relationship on sex can take but Winterbottom decides to just... well... do nothing with anything. And at 65 minutes, and you have to take the fifteen or so minutes of concert footage out of that, there was never going to be time for anything more than a cursory glace at two people passing in time.

The sex scenes are what they are, with both leads selling them convincingly and certainly seeming to enjoy what they are doing - but the curiosity peters out very quickly and, without a dramatic story to hang them on, one fuck scene is pretty much like any other.

The film looks great, shot on HDV with available light in a pretty grungy flat it has a documentary feel that just makes me wish even more I had been watching something I would want to revisit and feel was an important viewing experience.