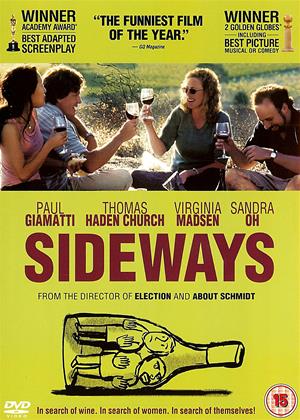 Really liked this film and surprised by negativity of other reviews. Brilliant performance by Giamatti as a pretentious wine buff and Madsen is enthralling as the woman who catches his eye. A bit painful at times, but that's the of realism hitting home.

A coming of middle-age drama. - Sideways review by CP Customer

The plot of 'Sideways' focuses on the characters of Miles and Jack, Recently divorced Miles is an English teacher, unsuccessful writer and self-confessed wine buff. Jack is daytime TV actor whose career is slowly in decline. With Jack due to be married in a week's time, he joins his friend on Miles' annual road trip through California's wine country. While Miles intends to spend some quality time with his best friend, play some golf and indulge his passion for good food and fine wines, Jack wants use the opportunity to have a final fling, with as many women as possible before his wedding day. While on their trip they meet Maya, a local waitress, and Stephanie, a vineyard employee, and the four end up spending time together. While I personally loved this film, I'm not at all surprised to see so many negative reviews from those who have rented it. I think 'Sideways' biggest problem is that it's a film, much like 'Lost In Translation' and 'Eternal Sunshine Of The Spotless Mind', which has attracted an audience of people who have been drawn to the film due to its critical success and Oscar award hype. Out of this audience it seems half have disliked the film as it wasn't what they though it would be and the other half just not understanding the subtle story, which basically is about two middle aged men on a road trip which ultimately leads to them discovering and coming to terms with their own identities. If you don't like character led, slow paced independent films then 'Sideways' isn't going to be a film you'll like. On the other hand if you loved films like 'Lost In Translation', 'Eternal Sunshine Of The Spotless Mind', 'About Schmidt', 'Happiness' or 'American Splendor' then this is a film hopefully like me you'll thoroughly enjoy.

Agree that this is a slow paced movie, but I have to disagree with the other reviewers here as I thought this was a great little character driven film and personally one of the best that I saw in 2005.

Two socially dysfuntional men fail to make any inroads or develop any understanding of the mid-life crises.

There are very few scenes which you will find enjoyable just scene after scene of pure dross.

Stay away from this film.

Worst film I've ever watched.... after 45 painfull minutes had to turn off. Very rare I don't watch film alway through but this one is an exception.

one to miss - Sideways review by CP Customer

couldn't make head or tale of it

Orginal script , but a boring one , focing to much of wine and the jargon that surrounds it.

Only the later part of the film before it becomes interesting.

Sideways is not sidesplitting... - Sideways review by CP Customer

Despite the claims on the DVD cover, this film is anything but "outrageously funny". The lead character adopts a morose expression all the way through the film, and his "comic" best friend poorly delivers his supposedly amusing lines in his surfer-esque voice. However, if you can sit through the boring and uneventful first hour, the pace begins to quicken (if only slightly) and more laughs are to be had in the second half. The style of Sideways is that of a teen film (say American Pie), just age the characters by 20 years and give them wine instead of beer. Nothing much is accomplished during the film, although its ending should be praised for going against that of so many other films. Overall, this film is probably best enjoyed with a glass (or six) of wine.

Not so funny - Sideways review by CP Customer

I didnt find it funny at all and ended up turning it off half way through.

Someone described this as a grown-up 'American Pie'. Not sure if I agree entirely. I'm 29, engaged and with a kid and this felt a little too mature for me. I'd say its more suited for the 30-somethings or professional working types who are planning to settle down. Still, it's from that branch of comedy that America is becoming really good at, a subtle & witty humour which I really did enjoy. Fans of 'Curb Your Enthusiasm' would like this.

Should have read the other reviews here, before wasting my time on this film - Sideways review by MG

Sexist, boring and dated, but most of all....... not very funny. I cannot understand why it has attracted critical acclaim (in some quarters!)