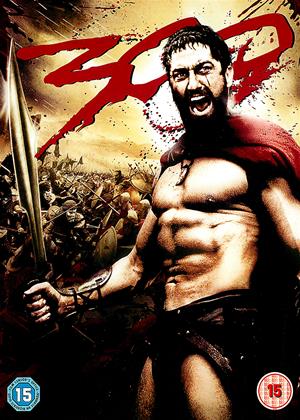 The movie I've patiently been anticipating finally presented itself and I gotta say it left me satisfied. Let me start off by saying this is one of the most visually stunning movies I've ever seen. To think 95% of the scenery is computer generated, yet it felt so real and gritty. Presentation was top notch. Gritty war movies are my kind of movies, and this delivers for those seeking the same thing. Crazy violent and exceptionally choreographed. After taking it all in, I can see some people probably thinking some of this stuff was over the top. There is a lot of fighting, but it doesn't get dull in my opinion. Story-wise, it sucks you in pretty well with a strong cast of characters. Solid acting throughout. There are a few scenes that feel like filler, but overall the pacing was very smooth. What keeps this from being up there with the all time great movies of the genre is that 300 doesn't really bring anything new to the table. Most of this has already been done to an extent. It definitely added it's own flavor and unique aspects to be a stand out movie in the action/war genre though. Had everything I wanted and needed. A must see for all action, big blockbuster enthusiasts!

The story is simple - 300 Spartans have to hold off the numerically superior Persian army. The film is excellently put together, the graphics are top notch, the actors & characters are convincing tinging on the gothic but the end result is a powerfully visual film. I'm not a big fan of graphic violence but this kept me (and my partner) gripped to the end.

Want action and visual spectacle rather than a strict history lesson? Then 300' is the film for you. From the same stable as Sin City, the film uses a mix of live action and CGI to bring the Battle of Thermopylae vibrantly to life in graphic comic form.

The opening shots set the scene effectively, introducing the harsh tradition that formed the Sparta warrior, as well as foreshadowing events to come. Gerard Butler is an imposing as a cartoon version of Leonidas, King of Sparta. Convincing despite the incongruous Scottish accent, he leads his select band of Spartan warriors to certain death and a place in history as they hold off the might of the Persian army to save their homeland and the whole of Greece.

This is not a subtle film. Nor is it aiming to be historically accurate. Motives are not analysed. The action is all. Each side is clearly polarised and effectively so. The Spartans, worryingly underdressed for the battlefield and unprotected save for their helmets are portrayed as witty, brave and properly heroic. The Persians, on the other hand, are suitably depraved as befits the dark side; either sinister or effeminate. Xerxes is portrayed as an effeminate tyrant with a penchant for body piercing. His henchmen are dangerously sinister bullies.

Atmosphere is beautifully created with light, golden scenes for an idealised Sparta whilst the advent of war is signified by darkening stormy skies of black and red. The fight scenes are stunning; beautifully choreographed at all times. The slow motion sequences are so elegant that at times it is as if you are watching a type of ballet rather than a scene of carnage. Somehow, this softens the violence, making it seem less gratuitous than if the battles were all out and dirty looking. Certainly it makes it much more watch able.

Whether you buy or rent, 300' is well worth a watch or two. Don't expect to be particularly emotionally engaged or cerebrally challenged. Do however expect to be entertained. You will be carried along effortlessly by the spectacle of it all and who knows, you may learn a little about history too.

if you want flash and images ok but story and telling is a essentail to a great film.this isnt

Light on story but packed full of action. - 300 review by CP Customer

I was surprised at just how much I liked 300. The storyline is fairly thin but the action is full on, gory and hugely enjoyable. The CGI effects are superb and cleverly never overpower the core of the story, which is the mythical tale of 300 Spartan warriors armed only with spears, swords and shields who took on a million strong Persian army. Overall, this is an enjoyable gore filled and action packed movie and an absolute feast for the eyes. Well worth a rental.

Fantastically entertaining sword & sorcery film adapted from a graphic novel and digitally produced to give it what was then a unique look (Sin City had a similar style a year earlier). Director Zack Snyder wisely made the film bloody, violent and very adult so its cartoonish look is overridden by the sheer spectacle and the wonderful slow motion battle scenes, strange creatures and often graphic violence. The story is built around real events namely the Battle of Thermopylae that took place in 480BC when a small band of Greek Spartan warriors held off a huge invading Persian army. Graphic novelist Frank Miller turned the history into a very popular fantasy epic and this film recreates his novel for the screen along with depraved beast like men, weird orgies and macho heroism. Gerard Butler, in his best ever role, is King Leonidas who having been forbidden to go to war by the deformed priests who control the laws of his land, takes 300 of his best warriors in defiance of them to defend a small pass against Xerxes (Rodrigo Santoro), Ruler of Persia, and his massive army. The support cast are fantastic and includes Michael Fassbender in his film debut, Dominic West, David Wenham and Vincent Egan. This is a film about heroism, utilising the old Greek myth type stories of old, a film that in earlier times would have been made with stop motion. What's great about this is it's simply great fun from start to finish. Every image is beautifully rendered and the action is exciting stuff. A film that takes facts, adds legend, myth and fantasy to make a contemporary action movie that really rocks.

I'm afraid this left me completely cold. I was expecting a vaguely historical story about Ancient Greece but got "Lord of the Rings" meets "Oiled up muscle marys in their pants". Since when was the Persian warrior king Xerxes a giant with an unfeasible number of piercings? Not my cup of tea at all.

300 is visually arresting and builds upon the legend with Frank Miller's comic series. Snyder has delivered an iconic piece of entertainment, not one that will warrant repeated viewings or appear on the 'best of' lists, but it is a romp that delivers. Plenty of extras await on this Blu Ray yet these take second place to the excellent picture quality that retains the gritty approach of the theatrical release.

From the computer generated 6 packs to the enhanced colour pallet this film is rather fake. I can forgive up to a point any film that puts action before story but this had neither and after half an hour I gave up on it. There are many things a computer can do but breathing life into a film isn't one of them. And it would take all the computers at NASA to make Mr Butler appear a decent actor. I haven't seen any of his other films so it may be unfair to make this comment but based on this I won't be adding any more of his films to my list.