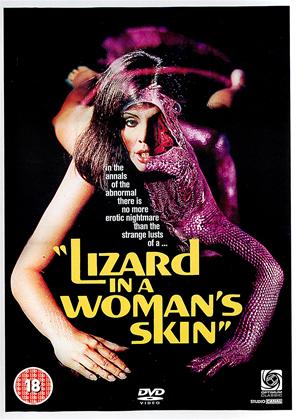 Rent other films like A Lizard in a Woman's Skin

Reviews (1) of A Lizard in a Woman's Skin

Spoilers follow ... - A Lizard in a Woman's Skin review by NP

How can there possibly be anything comforting about a giallo film, that cold, ruthless and brutal world in which ‘Lizard in a Woman’s Skin’ is a shining example? Could it be the haze of nostalgia for the period in which such films were made, the lush and vivacious production values that belies the lack of a huge budget? Could it even be the game of spotting the actress uncomfortable with cigarettes playing the part of an awkwardly casual smoker? Whatever it is, ‘giallo’ is a fairly stylised genre that straddles murder/thriller/horror with much success.

Familiar British face Stanley Baker here plays Inspector Corvin. Baker gives his usual exemplary performance (Corvin’s habit of – dubbed - whistling isn’t convincing, however), despite this being a period in his life when his own financial challenges required him to appear in films that diminished his star-billed status. His son Glyn later described ‘Lizard…’ as ‘a movie which makes absolutely no sense whatsoever.’ Stanley himself declared that he enjoyed everything he worked on, ‘including the bad pictures’.

I love the look Director Lucio Fulci gives this. Trippy psychedelia contrasts with some very sombre, often rainy locations to great effect: the false sense of safety in the warmly lit indoors, fighting with the sinister frostiness outside. The comfort of sex against some truly disturbing, if not always convincing, special gore effects (a shocking sequence involving dismembered canines required the makers to prove no real animals were hurt at the time). These things conspire to transport the audience into a dangerous world that is rarely quite real, and all the more effectively unnerving for that. This dreamy, druggy atmosphere doesn’t serve to make the complex plot any clearer, however!

As is often the way, revelations come thick and fast during the latter moments, and whilst it is true to say that another viewing may well help me make total sense of developments, the finale is a visual tour-de-force and stays in the mind for a good while after the credits have rolled. A word too for Ennio Morricone’s score; whilst it is a given that he produces some incredible melodious soundtracks, this has certain similarities to my favourite of all his works, that of his music for ‘Maddalena (1971)’. Beautiful.