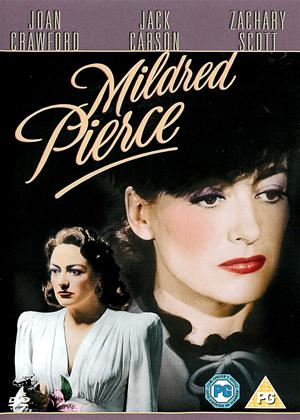 Cinemadiso's 1940s in Films Vol. 3
13 films by cinemadiso
Felix Navis's Rented
188 films by felix-navis
Frankie's 1001 Movies You Must See Before You Die
982 films by frankie
PRC's Rented
614 films by prc

I suspect James M. Cain didn't get enough credit for Double Indemnity (1944) because his excellent serial was was so gloriously polished by other more auspicious hands. He contributes another great narrative for Mildred Pierce which again was brilliantly reimagined for the screen.

It was made more of a noir by the addition of a murder not in the novel, which prompts a long flashback narrated by Joan Crawford as a waitress who prospered to own a chain of restaurants, but lost everything else on the way. It was the role of Crawford's career, and she won the Academy Award, and surely identified with the ordinary woman born into poverty who achieved wealth through relentless toil and who alienated her children though proscriptive parenting.

It's a powerful studio film. Much of the dramatic thrust is provided by Max Steiner's orchestral score,  illustrating Ernest Haller's gorgeous high contrast black and white photography which gleams like tarmac in the rain. Director Curtiz was a master of expressionism back in the silents. Mildred Pierce isn't as much of an urban film as its contemporary noirs. It is mostly set in the suburbs of LA, but it still makes good atmospheric use of its environment, the beach towns and highways of South California, and features a typically noirish, lavish Malibu beach house where the murder takes place.

But its greatest strength is the depiction of psychological frailty through the experience of childhood. It is an opera of passive-aggression, an epic of bartered love, of desire and greed rendered so frighteningly sordid that they both mean the same thing. The sassy screenplay is joy. The casting is serendipitous, particularly Crawford, and Ann Blyth who was seventeen when she made this but is scarily believable as Mildred's spoiled, sociopathic daughter.