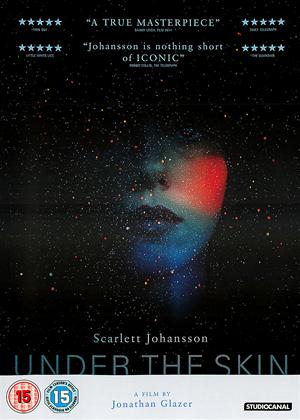 Reviews (17) of Under the Skin

This is such a weird film - I found it rather disturbing but it did stick in my mind for ages afterwards. It's the sort of film whose images could give those of a nervous disposition nightmares...

As you'd expect from former ad-man Glazer, it is beautifully filmed, looking like a pop video in parts.

Set in 2014 Referendum Scotland, with some incomprehensible Glasgow accents (use the subs), it went completely into weirdness at the film seduction - which is surprisingly explicit. I shall never look at Celtic fans the same way again...There then follows another seduction and another and really disturbing weirdness.

I am not a sci-fi fan and am not really sure what it was all about (maybe I shall find someone who's read the book to tell me). I think it's about an alien who wants to be human - but who knows?

But I would really like to have seen this on the big screen because the visuals deserve it. But maybe I'd have a stiff drink first...

It must have been made on a very limited budget and script.

Take my advise and don't bother watching it. As it is totally Naff. No story. No acting . I watched it all the way through as I hoped it might get better. It did not, now I'm wishing I had not wasted my time on it.

Basic story is female alien gets zipped into the skin of a female victim. Who then drips round Scotland looking for prey. To take back to a derelict building, then she strips and the poor chap, thinks there luck is in , so follows her across a black floor, then they are consumed in fluid. Then she's off to pick next victim. This carry a on pretty much for the entire film.

I would have enjoy waxing the husbands leg more

Visually fascinating, with music to match. Not sure what it was about, but I watched it twice - this must mean something...

I would recommend the film - be good to see it in a group on a big screen.

Does the idea of being seduced by a sexy alien disguised as Scarlett Johansson in a Transit van appeal to you? If you like that idea, then you might like 'Under the Skin' - it reminded me of 'The Man Who Fell to Earth' crossed with 'Species' and set in Scotland.

It's directed by Jonathan Glazer whose best-known film is the gloriously over-the-top crime caper 'Sexy Beast'.

I quite enjoyed it so I guess I fall into the latter camp, so I'll give it an over-generous 4/5 stars.

[Aside 1: I'm now off to order the book by Michel Faber which is reputedly much better]

[Aside 2: Whenever I see ScarJo, why does the old Sex Pistols song 'Pretty Vacant' come to mind...]

Spoilers ... - Under the Skin review by NP

Scarlett Johansson won much acclaim for her playing for the unnamed woman in this strange and powerful film, which failed at the box-office, but received many positive reviews. She plays an unspecific alien who assumes the appearance of a young woman.

This reminds me a little of Chris Alexander’s ‘Blood for Irina’ (a favourite of mine which I mention at every opportunity!) – a wearied seductress who appears to have her victims ‘tidied away’ by an un-named male protector (or protectors), lingering scenes, not a lot of dialogue. Where it differs though, is in people’s reactions to the woman, who initially appears to pick up men with a calm confidence. They are mesmerised with her. The sight of hopeless Lotharios, alcohol fuelled antagonists who see her as sport, or those who just want to molest her. There are two exceptions. One man she picks up suffers from a facial disfigurement – his shy, inexperienced exchange with her is difficult to watch. She is fascinated with him, and he survives (for a while) the fate usually bestowed on her ‘conquests’. The other exception is a quiet reclusive man who genuinely seems to want to help her (her confidence has been worn away and she becomes virtually somnambulistic by this point – quite why is not clear), but there closeness comes to an end when sex is attempted and she appears incredulous at the workings of her own body.

We find out why in the next ‘episode’, in which a logger in a snowy forest attempts to rape her, and tears the flesh from her back, revealing featureless jet-black skin beneath. His sudden fear propels him to douse her in petrol and set fire to her. Her descent from dominant, confident protagonist to cowering, submissive victim is cruel and frustrating.

I can’t help but feel that a few more explanations might have made this a more satisfying experience. It is based on a book of the same name which leaves far less to the imagination. However, this is a fascinating film, beautifully acted. It looks wonderful too, from the sight of the beautiful Johansson in relentlessly freezing, harsh conditions, to the brief but incredible glimpse of her true form. Spellbinding.

Dreadful film - Under the Skin review by gazmb

Shame I had to put one star it doesn't deserve that. It seems very poorly made with virtually no budget it feels . The script is dreadful, I stuck with it for 30mins and had to turn it off , dreadful and boringly slow.

Different - Under the Skin review by PS

Very moody with a lovely slow build topped by a great finale - my type of film :) - Under the Skin review by Sapphyr

The photography - scenery, is beautifully understated and Scarlett Johansson, alien or not, would seduce the pants off pretty well anyone and, like the scenery, is *great* eye-candy :) I'm not that much of a petrol-head so I was put off Transit Vans when I was at uni - a yawn, yawn car-club raving about trivia - getting from 'A to B' that's all that matters!

Bizarre and disturbing - Under the Skin review by LP

Totally bizarre and disturbing film. About half hour into the film I found I couldn't watch anymore. My husband could manage to stick with it, admittedly being more of a sci_ fi fan than I am. It appears to be a low budget film with not much acting to speak of. Scarlet was disappointing driving around in a van picking up unsuspecting males who were then stripped and submerged in black fluid!

You could have more fun chewing your toenails.

Found it boring, slightly disturbing in places.. - Under the Skin review by CP Customer

I gave it a go, but the first 30 mins were fairly repetitive and not very interesting. I'll stick with a film if I think its going somewhere but found myself fast forwarding through it to see if anything was going to actually happen... I wouldn't recommend it. I don't mind disturbing, boring doesn't do it fro me though...

Indulgent dross - Under the Skin review by CP Customer

I wish I had read SW's review and the others here because it was spot on. So disappointing and can't understand why Scarlett Johansson took it on unless she saw it as an opportunity for some easy money.

Under the Skin review by George Hooper - Cinema Paradiso

When you think alien invasion you think large spaceships, strange looking aliens and a whole lot of running. This might be because of the many Roland Emmerich and Michael Bay pictures that insist that this is how alien life will present itself to us but by this stage its just what you expect. Under The Skin however is the story of aliens but is a much more personal and quiet story.

The film follows an alien woman (Scarlett Johansson) who roams the streets of Edinburgh picking up lonely men and taking them to be used by her masters. However when she begins to connect with her victims on a personal level she begins to question her role in this plan and what she can possibly get out of it.

While Under The Skin is about a strange force encroaching upon the normal world it is also about everything we keep hidden about ourselves from our personal wants to our sexual desires. While she silently hunts she contemplates where she belongs in this world and her connection to the people living in it but she also seeks something more than the solitary life her mission affords her.

When she finally starts looking for more she learns more about what we shouldn’t want and the things in life that often bring heartbreak and deception. Johansson brings this indecision and fear to life while still accentuating the alien about her. While the visuals prove powerful and vivid the film drags on as it proves hard to truly comprehend the story being told as everything about this woman is a mystery, something we may never figure out.

The film looks into the darkness that surrounds all of us but it rarely makes any kind of comment about leaving viewers to make decisions based on the slim moments of understanding we can glean from this womans life and the darkness she sees along the way. While its all well and good learning about us through the eyes of something new its hard to understand most of the films enigmatic story and it may leave you ever so slightly confused