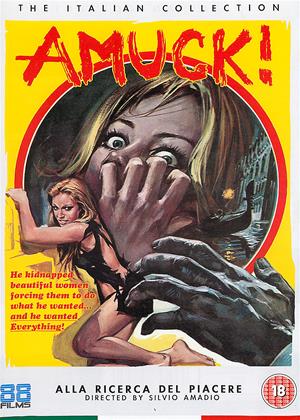 Rosalba Neri looks stately and picturesque when holding a cigarette, but never entirely convincing when smoking. She stars as Eleanora in this exotic, erotic giallo as the wife of novelist Richard Stuart (Farley Granger). Between them, they exude an aloofness that inclines you to believe they know everything that is going on, certainly more than the audience. So when Greta Franklin (Barbara Bouchet) arrives on their stately island near Venice as the new secretary, their initial smoothness soon becomes something more. A crushed tablet in her drinking water, and soon Greta and Eleanour are stripped naked and getting to know each other.

Greta is posing as a secretary to investigate the disappearance of the Stuarts’ former employee, Sally, who was Greta’s lover. The upmarket sleaze and atmosphere of kinkiness prevalent in their stately home can be ascertained when you look at some alternative titles for this: ‘Maniac Mansion’, ‘Leather and Whips’ and ‘Hot Bed of Sex’ give you every reason to believe that the sex quota in this giallo is generous indeed.

Petar Martinovitch is excellent as simple-minded Rocco, a hugely physical fellow who is aroused by the sexuality around him and cannot control the after-effects. Is he a victim in all this? He is certainly deliberately used, and his resultant unrestrained qualities have a large part to play.

This may be Neri’s best role. She’s terrific throughout, and has an incredible presence that dominates the screen. But she’s not given an easy ride by Bouchet, who is compelling and never reduced to being a screaming cypher. As is nearly always the case with giallos, the girls get the best moments. Farley Granger shouldn’t be overlooked though – his delicate flamboyance as Richard masks a villain in the classic line of frustrated weaklings.

There is a glorious period feel to this '70's giallo thriller, with atmospheric music, vibrant colour and fashions, some nice cinematography and a stunningly attractive female lead. We also get a generous serving of sex and nudity, so much so that it almost feels like a soft porn film at times, though it's all pretty classy and stylised. Less pleasant, but in keeping with the period, is the casual animal cruelty (several ducks are shot in a hunting scene, whilst a live eel is sliced in half). The 'whodunit' plot has a great hook: a novelist's secretary has disappeared, so her friend takes over her job to try and find out what happened to her. The author begins to dictate what seems like the answer to the mystery - but is he telling the truth, or just creating more fiction? Unfortunately the script gets a bit bogged down with red herrings that ultimately lead nowhere, and the final revelation doesn't quite satisfy. Nevertheless, despite the script being slightly below par, there is more than enough of interest here for this to be well worth a watch.