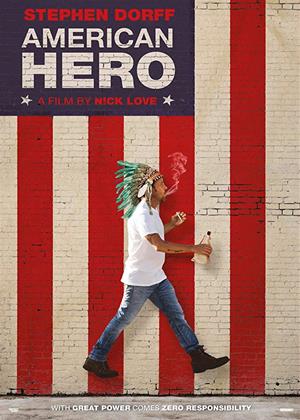 Synopsis:
Melvin (Stephen Dorff), a reluctant hero who is far from super, has been suppressing his telekinetic powers for years with booze, drugs, and women. In the process, he has failed at practically everything, most of all as a parent to his son. After a brush with death, Melvin decides to use his powers for good and clean up the streets of New Orleans with the help of his best friend/definitely-not-a-sidekick, Lucille (Eddie Griffin). For a man who can do the impossible, it might be a fight even he can’t win.
Actors:
Stephen Dorff, Eddie Griffin, Bill Billions, Jonathan Billions, Andrea Cohen, Luis Da Silva Jr., Keena Ferguson, Raeden Greer, Yohance Myles, Tim J. Smith, Michelle Tabora, Phillip Michael Youmans, Christopher Berry, Daniel James, Floyd Anthony Johns Jr., Ariadne Joseph, Robert Larriviere, Starlette Miariaunii, King Orba, Dominique Perry
Directors:
Nick Love
Writers:
Nick Love
Genres:
Comedy, Sci-Fi & Fantasy

The protagonist of American Hero is in no rush to don a costume and battle a villain. He’s also in no rush to use his powers to fight crime or redeem himself. For most of the picture, he is drinking, smoking, partying and using his psychic powers to toss junk around a junkyard or impress women. And we’re apparently supposed to root for this guy that takes his sweet time crawling out of a bottle to pay alimony.

Melvin (Stephen Dorff) is a rather baffling character in how long it takes him to both reform and realize what he is capable of. He’s asked by a cop to use his powers to stop criminals, but he refuses as he is currently having a joint. Melvin would rather use his powers to mess with mess with his sister and throw temper tantrums then do anything meaningful. You’d think with the backing of his crippled friend Lucille (Eddie Griffin) and science teacher Lucas checking him out that he’d have enough motivation to finally stop being a deadbeat. But, no, Melvin apparently has to reach the absolute bottom of despair and nihilism before doing some good.

His whole experience is displayed documentary style with a camera crew following him around. It soon becomes apparent that this gimmick was utilized to deliver a more shaky-cam technique to the visual effects and/or to not have to deal with editing out the filming crew from the footage. Of course, the gimmick becomes forgettable for the director in which we start following Melvin to the hospital and into areas where gangs start shooting at him. The cameramen should probably take cover when bullets and metal start flying, but then we wouldn’t have that decent set piece of Melvin assaulting a gang at their rundown complex. These special effects are okay for a budgeted film or a student demo reel, but once the visual treat of Melvin moving objects with his mind amid a jerky camera loses its effect after the 10th display.

The character of Melvin is not only hard to empathize with, but also puzzling to decipher. He seems to be the typical hardcore partier of New Orleans spending most of his time with loud music, lots of beer and simple party folk. But he seems to fancy classical music and literature for singular scenes. He has a son that he desperately wants to see, but his devotion seems limited to his blithering excuse for becoming straight. His scatterbrained motivations make it difficult to keep up with his progression in character or lack thereof.

Melvin ultimately becomes a maddening mess of missed potential. His trial goes badly for seeing his son and he resorts to drinking. He discovers that his son is hanging out with a gang of dealers and does little more than mock them. His friend is beaten up by the gang and Melvin resorts to more drinking. I hope you like superheroes constantly drinking and using their superpowers for pointless displays of rage. The movie features Melvin struggle with what to do about the gang as he makes an entire neighborhood crumble and explode with noise. Gee, maybe he could use those powers to actually destroy gang members instead of just being a jerk to his community.

American Hero isn’t an origin story of a bum rising from the ashes of his own shortcomings to be a do-gooder. Instead, it’s the rockstar story of a party monster who becomes slightly less unlikable. I’d like to applaud this small superhero picture for not going over the top with its hero angle in that Melvin never really develops into a costumed hero or villain. In fact, he doesn’t really develop into much of anything. When even his grand moment of revenge and justice feels half-hearted, I find myself longing for a stereotypical comic book villain and a big blue laser-firing death machine for him to stop. At least then he wouldn’t have much time to do drugs and booze it up in alleys.